Historian Mann Looks for another World Through the Lens of Columbus

The worst tragedy in human history went unnoticed by most of the world and unrecorded for centuries.

That’s just one revelation of science journalist Charles C. Mann’s 1491: New Revelations of the Americas Before Columbus, an exploration of Native American life before European contact. After Christopher Columbus landed in El Salvador and before Europeans could reach most of the Americas, Mann concludes, European smallpox wiped out up to 112 million Native Americans, rendering once advanced civilizations and sprawling cities desolate. That was  one-fifth of the world population. Not even the Black Death compares.

Mann will speak at 10:45 a.m. Tuesday at the Amphitheater for the second lecture in a week on “Our Search for Another Earth.” Drawing from his studies of what happened after the Old and New World collided, Mann will lecture on what the search for other planets and civilizations could mean for humanity. 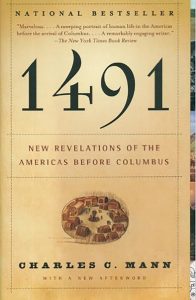 “He has nothing to say about our search for another [Earth],” said Sherra Babcock, vice president and Emily and Richard Smucker Chair for Education. “What he really understands is if we were to find another earth, that would be a disruption not unlike what happened when the [New and Old] worlds met.”

For Native Americans, it meant a near extinction-level event. Without the immunities that Europeans had to smallpox, most died, and with entire tribes decimated, Europeans were able to overrun the continent.

Scientist Stephen Hawking and others have warned that could happen to all humans if extraterrestrial life is ever found.

But in the sequel to 1491, 1493: Uncovering the New World Columbus Created, Mann explores the transformative economic, political, social and ecological implications intercontinental contact had for the world.

Mann wrote that the Columbian Exchange introduced an age of ecological homogeneity. Plants from remote areas became global to the point that now, Mann told NPR, his own New England garden contains tomatoes from Mexico, basil from Italy and onions from Europe. New World potatoes fed Ireland and then allowed for the Irish potato famine, Mann writes. Smuggling rubber out of Brazil led to devastation nearly a century and a half later in Laos.

The theme of the summer is “What Does It Mean To Be Human?” and Babcock hopes Mann will provide a hint at the answer.

“What we asked him to talk about is disruption and huge disruption, where suddenly everything you thought you knew wasn’t right anymore, everything that we as humans … knew was suddenly challenged,” she said.

Ambrosius Argues that Space Exploration is a Form of Worship