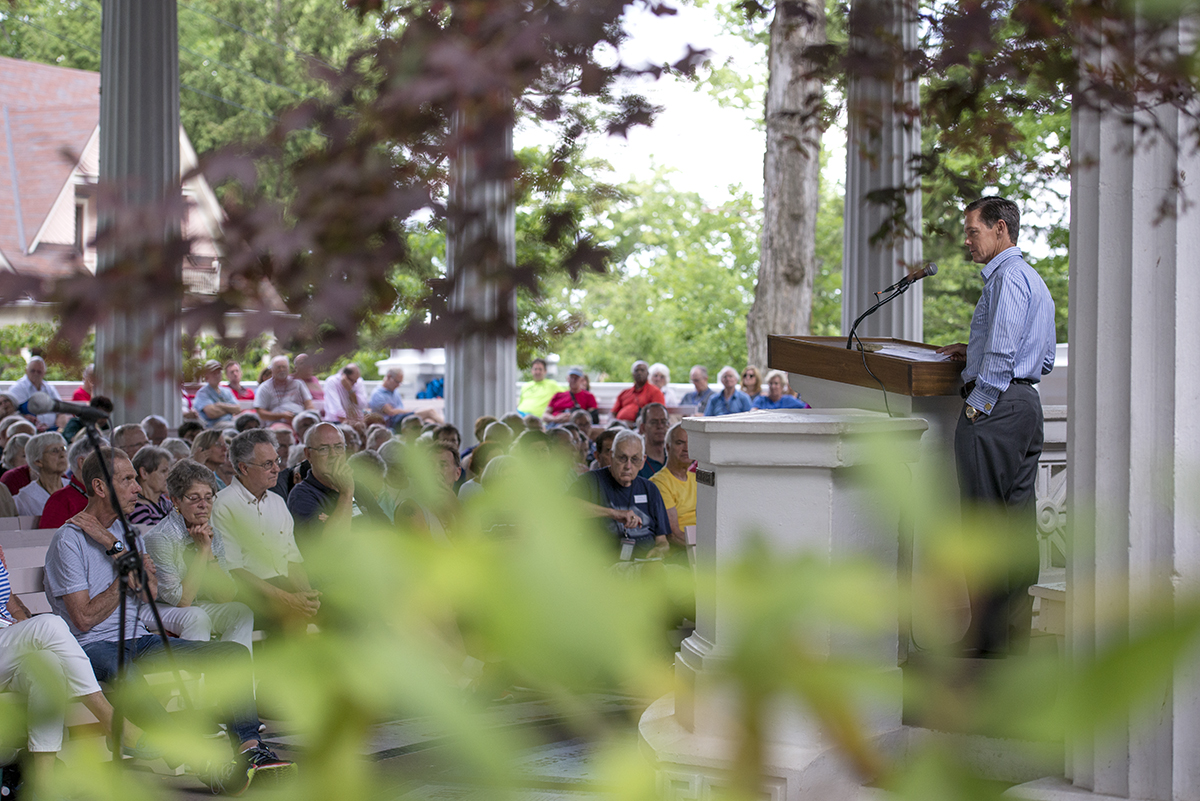 A Ralph Reed lecture on the connections between the Declaration of Independence and the Gospels veered quickly into a thinly veiled endorsement of Donald Trump, triggering sharp backlash from a largely anti-Trump crowd at the Hall of Philosophy Thursday afternoon.

Murmurs and boos rose through the crowd as Reed, founder and chairman of the Faith and Freedom Coalition, shifted from discussing the Christian duty to search for the greater good in candidates to the “unspeakable tragedy of abortion.” After Reed concluded with his faith-based support for a candidate who defends religious liberty and will fight ISIS, nearly two dozen Chautauquans lined up to ask questions — or deliver political statements.

Of the roughly 10 people who spoke, almost all voiced opposition and none expressed full agreement. (A few audience members did stand and clap in support of Reed.) They asked how he could ignore structural inequalities or endorse a candidate with the temperament of an unruly child. They peppered their questions with phrases such as, “How can you justify?”

“Yeah. Was there a question?” Reed asked.

“No,” the final questioner said. “It was a statement: I disagree with you.”

A 30-year veteran of FBI investigations and embattled political campaigns, Reed said he was surprised certain statements proved controversial, such as that reasonable people could disagree on Trump’s character.

After three days of lecturers whose records were staunchy liberal, Reed marked a drastic departure. He rose to fame as the first director of Pat Robertson’s Christian Coalition. One of the most powerful advocacy arms of the religious right, it has worked to elect anti-abortion and pro-gun candidates.

The coalition is also credited with helping orchestrate the 1994 Republican takeover that gave the GOP control of congress for the first time in 40 years. How crucial was Reed? In 1995, the cover of Time declared him “The Right Hand of God.”

From the outset, Reed said he would try to stay above politics. Yet, a little less than a month before his speech, the political operative agreed to advise Trump and on the lectern said he was headed to Cleveland for the Republican National Convention. By the time he moved to specific policy proposals, he seemed to have lost the crowd.

Reed’s argument was both historical and theological; he set out to prove that faith was at the heart of the nation’s founding and that Christians have an obligation not only to be pious parishioners, but also engaged citizens. He started with the Declaration of Independence.

Morality requires a clear line between justice and injustice, Reed said, and when discussing injustice people often use the phrase “his rights have been violated” or “he had no right to do that.”

“So we can’t discuss really discuss morality without discussing our rights and origins thereof,” Reed said.

What made the Declaration of Independence so important and unprecedented was its second sentence, “that all men are endowed by their creator with certain unalienable rights, that among these are life liberty and the pursuit of happiness.” That single sentence, Reed said, overthrew centuries in which kings claimed divine right to rule. Now, rather than God protecting a government who could dispense with rights at will, Reed said, God gives men rights and government’s sole purpose is to protect them.

If a government doesn’t protect them, the declaration states, the people are obligated to revolt. Reed recalled the image of Chinese student protesters in Tiananmen Square reading the declaration.

“This one idea has transformed human history and changed the course and trajectory of society,” Reed said. “It has inspired democratic revolution and movements the world over.”

From the outset, Reed said, faith was essential in upholding this American liberty and prosperity. He quoted Alexis de Tocqueville’s praise of American religiosity and John Hancock’s exhortation that defending liberty is a Christian duty.

“Faith in God, and the Christian faith in particular, and the assertion of civil rights became inextricably intertwined,” Reed said.

But Reed said that idea actually dates back to the earliest days of Christianity. Becoming the third interfaith lecturer this year to quote from the “Render unto Caesar” story in the Gospels, Reed argued that the parable taught that Christians have to be both citizens of heaven and earth.

In that parable, Jesus is asked by the Pharisees whether Jews should pay taxes. Jesus asks, “Whose image is on the coin?” They say, “Caesar’s.” Jesus says, “So render unto Caesar that which is Caesar’s and unto God that which is God’s.” In other words, Reed said, fulfill your duties to both God and the state.

It is a Christian’s moral obligation, then, to drive to the polls on election day, Reed said. Staying home is not an option for people of faith.

“If we expect leaders and governors to provide moral leadership, then we as citizens, as moral actors ourselves, are required to carefully and thoughtfully choose those leaders,” Reed said.

Reed also took aim at an idea that has caught traction in just the last few days: Christian America no longer has critical voting power. On Tuesday, The Atlantic published “The Eclipse of White Christian America,” which noted white evangelicals were losing ground in an increasingly diverse and secular country.

However, Reed said, 37 percent of the electorate are evangelical, or mass-attending Catholics.

“Reports of my death have been greatly exaggerated,” Reed said, quoting Mark Twain.

Reed moved on from discussing history and abstract civic duty, to what he was specifically looking for in a candidate: anti-abortion, religious liberty and hawkish on ISIS.

And then the people, who had listened for nearly for an hour to a man The Wall Street Journal once called “perhaps greatest political operative of his generation” started to exercise their civic — and now Christian — duty, and told a member of the political class exactly what they thought.