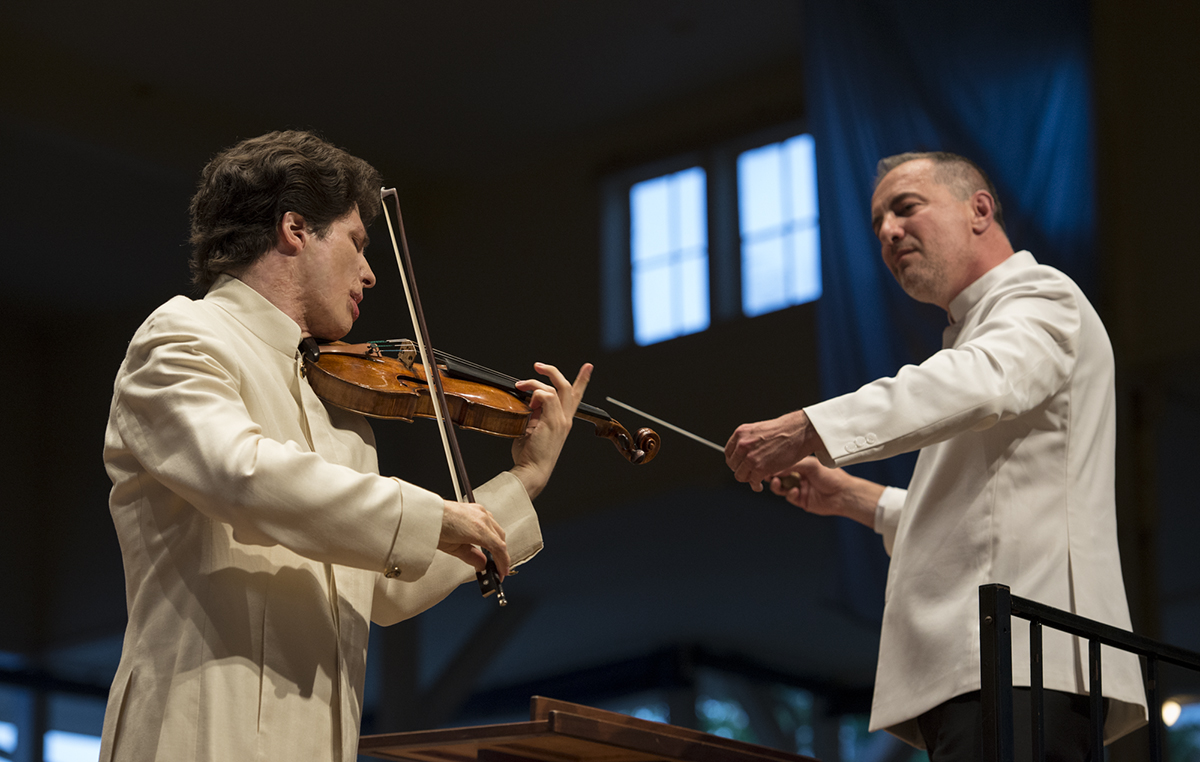 Residents and guests aren’t the only ones who reunite at Chautauqua.

No, as the Chautauqua Symphony Orchestra’s 2016 season kickoff concert Thursday night at the Amphitheater reminded all in attendance, the arrival of a new June here is also a time for musicians to reconnect and rekindle their collective passion.

That this is true was readily evident Thursday, even to a spectator several steps removed from the orchestra’s internal culture and traditions. Under music director Rossen Milanov, the group practically beamed, glossing over a few rough spots and transmitting nothing but joy at being back together and at the beginning of another intense summer. Truly, what many ensembles accomplish in a year, the CSO is about to knock off in two months.

On paper, in terms of format, the program hardly could have been more conventional. In performance terms, however, it was anything but.

Start, as the program did, with Dvořák’s “Carnival Overture.” A start to the season more festive than the zesty, ebullient performance given by Milanov and the CSO is difficult to imagine. To employ a rather tired but still useful musical analogy: all pistons in the orchestra were firing, and all at once.

Tired, meanwhile, is just about the last word anyone would use to describe violinist Augustin Hadelich’s performance Thursday of Bruch’s Violin Concerto No. 1. Better in this case would be such adjectives as remarkable, brilliant or spellbinding.

Never mind the work’s war-horse status or Hadelich’s pre-existing fan base here. (This paper rightly dubbed him a “Son of Chautauqua.”) Through obvious communication with Milanov and the CSO, and his own considerable gifts, the violinist easily managed to make the Bruch sound fresh and almost new.

Where some treat Bruch with the musical equivalent of a hammer, Hadelich wielded a huge and diverse set of brushes, endowing each segment of the work with its own, bold colors.

Technical perfection, with Hadelich, was a given. The rich nuance and sense of mystery he brought to the Prelude, however, came almost as a surprise. One wished, as he lovingly unfurled the score’s melodies, as if for the first time, that they never had to end.

Ditto the famous Adagio. Far from an afterthought, the music in Hadelich’s hands enjoyed a delicate, finely wrought rendering, an ideal balancing of emotion and momentum.

Neither could one have asked for more from the Finale. As executed by Hadelich, the movement was more than a virtuoso showcase. It was a genuine dramatic scene, a feat of relentless striving and hard-won success. That Hadelich quickly turned and tore into Paganini’s finger-twisting Caprice No. 19 as an encore only sealed the deal.

What Hadelich did with Bruch, Milanov and the CSO did with Prokofiev’s “Romeo and Juliet.” In a pleasantly eclectic suite of music from the ballet, conductor and orchestra saw that each scene held its own and told a story.

That was the sort of performance only achievable by a cohesive group. Less closely knit ensembles simply can’t interpret the Montagues and Capulets scene, for instance, the way these forces did Thursday, as a grinding, military-grade conflict. Neither can they lavish such opulence and grace on Friar Laurence or evince such lilting freedom in the Menuet.

And forget about the final trio of movements: “Romeo and Juliet,” “Death of Tybalt” and “Romeo at Juliet’s Grave.” In anything but truly confident hands, those critical scenes will languish. Here, though, they shone; the lovers, as luminous, timeless beings; Tybalt, as a grandiose, swaggering presence to the end; and the conclusion as a haunting, overlooked musical gem.

Chautauqua is a place unique on many accounts. Let it never be forgotten that one of them, and arguably the greatest, is music.

Zachary Lewis is classical music and dance critic of The Plain Dealer in Cleveland.

Seven Stars: The Workers Behind Chautauqua