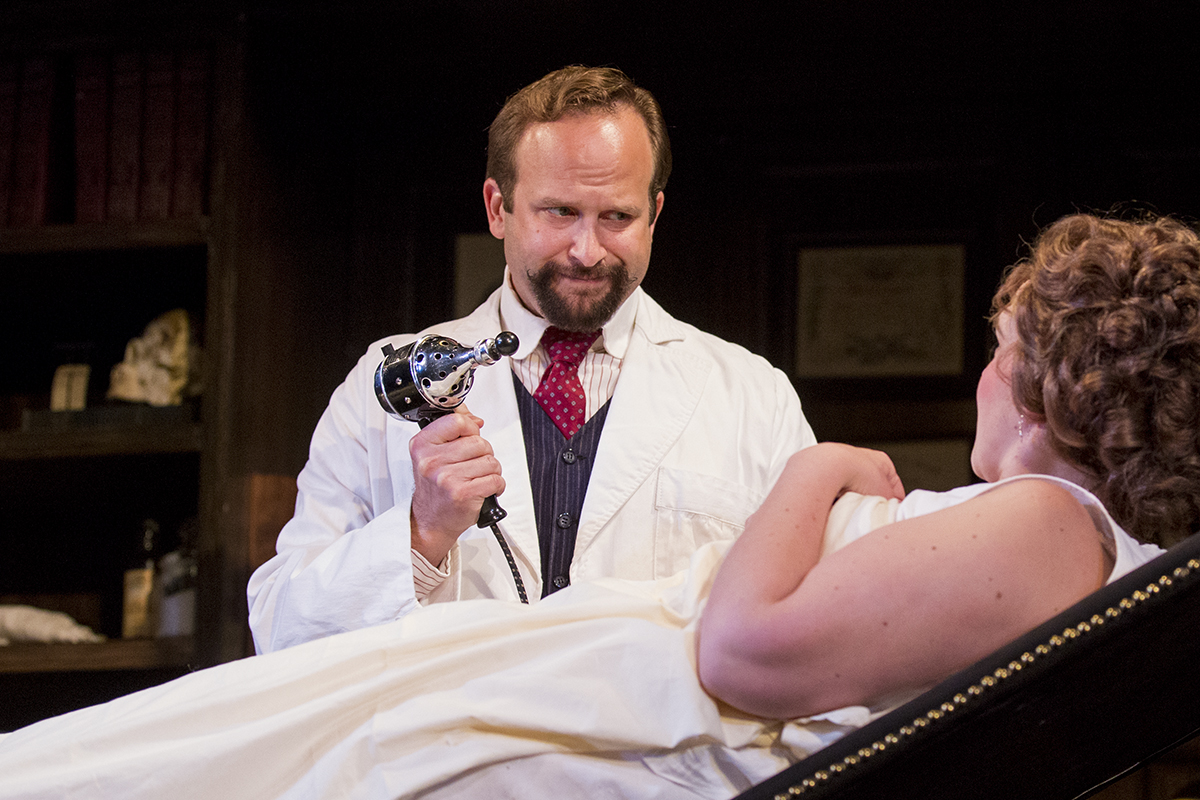 Hyla Sue Stellhorn, Samuel Stark and Danielle Ferri have the buzz on the vibrators.

Stellhorn, the props master, Stark, the assistant props master and Ferri, props artisan, have been putting in 9 a.m. to midnight workdays lately for Chautauqua Theater Company. They’ve got a van that Stellhorn called “a junkyard,” and there’s still housekeeping notes to be dealt with. And that doesn’t cover the work they’re already doing on The Profane and The Taming of the Shrew, even though the latter doesn’t open until Aug. 12.

Yet they’re acting casual and relaxed as they recount their recent escapades creating old-fashioned medical instruments.

Instead, they used the hand-held piece from the original and Ferri created an all-new box to attach to it. A speaker was placed under the onstage exam table to generate the noise.

They added molding to make it more feminine, plus a plug, dials and a volt reader.

They called it the Ferri Feel Good 4.0.

Beyond the vibrators, the prop team is responsible for the furniture that gives life to the Victorian home owned by the Givings.

“Everything we had looked awful,” Stellhorn said. “It looked like it had rats living in it.”

One piece was in such bad shape that they found a bath mat stuffed in as padding.

Other times, they played the part of surgeons, dissecting and reassembling furniture to make something truly unique.

“There was a lot of Frankensteining the different furniture together,” Stark said.

Perhaps his greatest monster was a chaise lounge that had to be taken apart and remade, completely flipped so the arm was on the opposite side, and reassembled to prevent it from blocking the action behind it. When Stark was done, it was a one-of-kind piece.

CTC’s next show, The Profane, involves two different houses that need to be furnished, as opposed to Room’s single residence. Because of that, Stellhorn started hunting for pieces for the show before Room even opened.

“The turnaround happens so fast we kind of need to juggle certain demands of all three shows at the same time,” Stellhorn said.

Props are an ever-changing game for the trio, who often walk into rehearsals to find what they’ve built now doesn’t work. They have to redo it to meet the show’s needs.

“You never know what you’re going to find,” Stellhorn said.