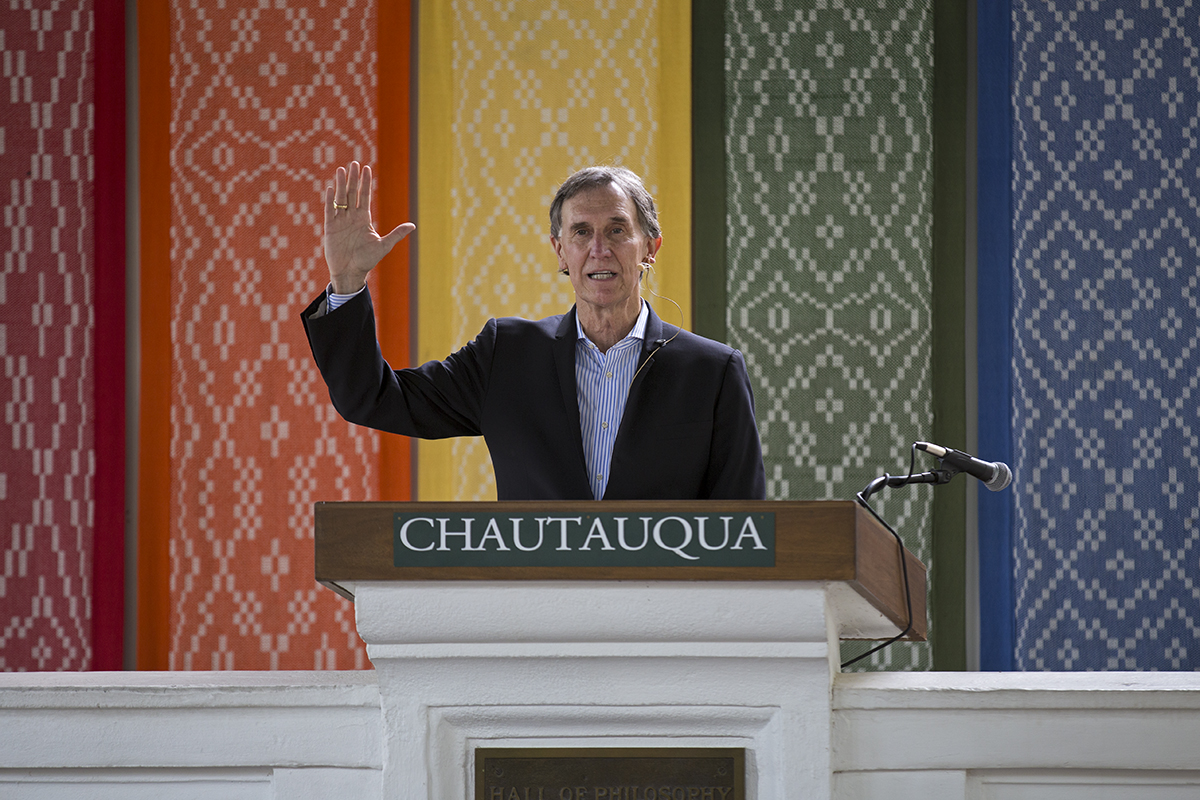 J. Douglas Holladay believes American men are in crisis, and he has a solution: talking.

In the first Interfaith Lecture exploring “Money and Power Through a Spiritual and Ethical Lens” Monday in the Hall of Philosophy, Holladay, a former Goldman Sachs officer turned presidential adviser turned special ambassador to South Africa, deplored what he called a crisis of leadership among Americans, and an obsession with ambition at the expense of meaningful relationships that, in the end, actually makes men worse in their jobs. In other words, the building of important relationships and the re-evaluation of one’s goals in life can produce both better leaders and better men.

“The unintended consequences of accomplishment on any level — success, money, power — is isolation, disconnectedness, confusion about how to raise children, confusion on part of children how to navigate world yo

u’ve given them,” Holladay said. “All these crazy unintended consequences and no ones give us roadmap.”

To help combat that isolation, Holladay founded PathNorth, a non-profit that helps CEOs find new definitions of success outside of the business world.

He cited a slew of statistics: Half of American CEOs feel desperately isolated, according to one study by Inc. Magazine, and 67 percent of that said they’re making bad business decisions because of it.

Whether people can form connections outside of their professional life is of grave importance. Holladay cited a 75-year-long Harvard study that found that longevity, graceful aging, and well-being correlated most strongly with having deep and long-lasting relationships.

Failing to form those bonds can end in tragedy. He quoted author Gail Sheehy, who said the average suicide age for men is 63.

“[That’s the age of] retirement,” Holladay said. “You’ve achieved your goals or you didn’t, whatever it is, and you are where you are, and you’re all of a sudden there and you start to ponder: is there more?”

Holladay wants to make sure that there is. He gave the example of what he wants to avoid: a retired lawyer who calls his old partner to get lunch, but the partner said no because their only relationship has been over legal briefs.

Through PathNorth, Holladay organizes retreats for business leaders to Trappist monasteries where they can escape the endless cycle of meetings, emails and phone calls, to learn to think deeper about themselves and the world. He also brings them to pitch-black restaurants where the most powerful people on the planet have to learn to be at the mercy of a blind waiter for two hours.

The linchpin, though, of both PathNorth and a class Holladay teaches to Georgetown M.B.A. students called “The Life of Work” is M.A.P. — short for meaning, authenticity, perspective — groups. Students read articles by thought leaders and meet once a week for 45 minutes to discuss them. The idea is for students to form deep and meaningful connections.

“Sounds so simple, but talking about something other than sports [and talking about] whatever things that make you get into heart is hugely important,” Holladay said. “But it doesn’t go on a lot, and it’s literally killing people that we don’t, because we were meant for this kind connection.”

Dancing between anecdotes with Buffetts and Rockefellers and quotes from Tolstoy and E.E. Cummings, among nearly a dozen other scholars, Holladay offered a few other tips for escaping the business cycle and find deeper meaning:

• Finding a tether: He compared life to the mythic Greek Labyrinth, in which Theseus ties a ribbon to one end and carries it with him so he’ll always be able to find path back. Holladay urged everyone to find that tether.

“Make your own list about what do you needs to make your flourish,” Holladay said. “[The Greeks] said that for a great society we need great people, and that’s exactly what we need today.”

• Finding your story: Holladay urged the audience to understand their story in life. He recounted a conversation with musician Peter Buffett, Warren Buffett’s son, and his own relationship with his sons who strayed from the corporate world to find their passion in music. People must also learn others’ stories to understand them, Holladay said, citing a man he once despised and regarded as a dogmatic tea partyer. Later, Holladay found out the man’s father had maintained two parallel families in the same town and he now wants to see things as black-and-white.

• Take risks: Embrace failure and never stop trying, Holladay said. He cited the parable of the talents, in which a master gives each of his servant “talents,” money, and then comes back to see how each one did with the talent. He is only angry at the one servant who buried his talent and did not make something more out of it.

Holladay’s final hope resides in that Georgetown classroom. Each year, he said, he asks his class how many of the “lights have gone out” in their fathers’ lives, meaning they have no meaningful relationships and are just going through the motions. He said about 60 percent of his students raised their hands.

“And I say to them, the purpose of the course is to give you some tools so that when one of my three sons is teaching your kid this course one day, they won’t raise their hand,” Holladay said.

And for many one of those tools can be, of all things, Chautauqua Institution, Holladay said.

“It’s not in politics or in business, but in places like [Chautauqua] that give you space to breathe and think,” Holladay said.