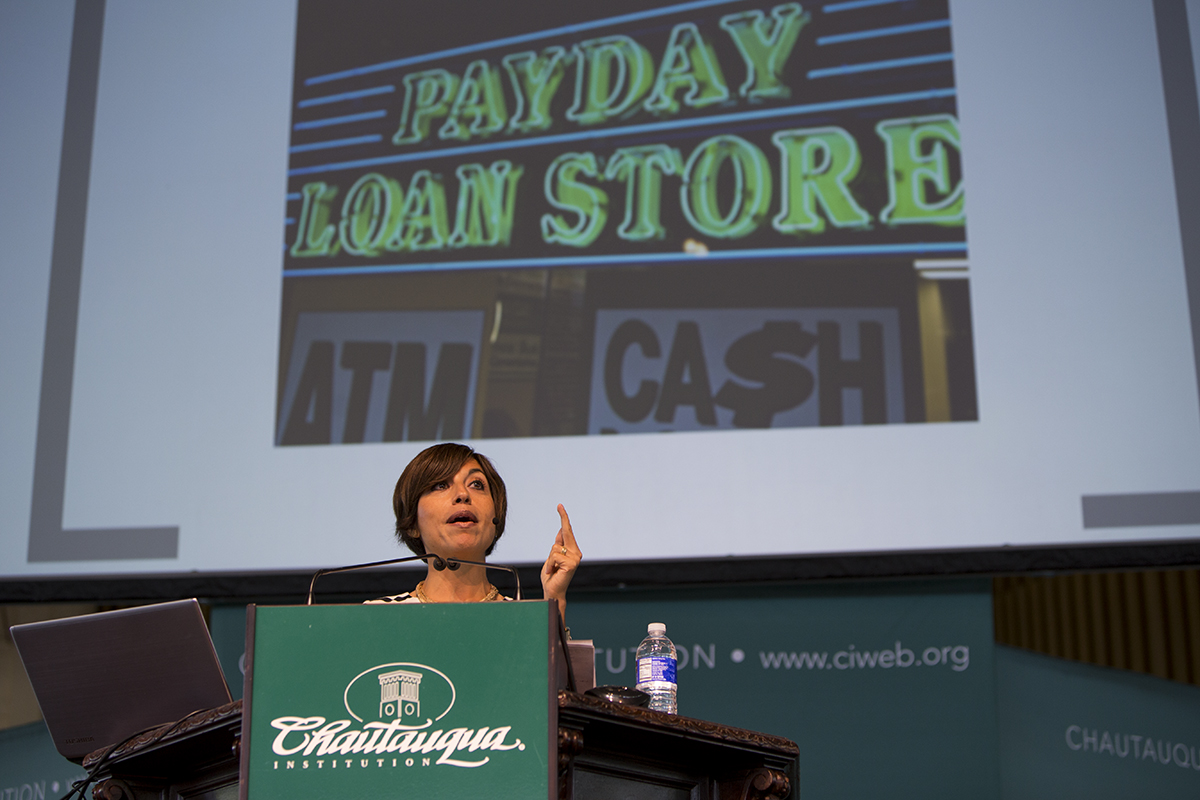 The average American would need to borrow money if faced with a shortfall of $400 due to unexpected expenses, said Mehrsa Baradaran, author of How the Other Half Banks: Exclusion, Exploitation, and the Threat to Democracy.

During the 10:45 a.m. July 5 morning lecture in the Amphitheater, Baradaran discussed the issues of America’s current banking system and the inequality low-income individuals and families face when it comes to finding a bank. She offered a solution to this inequality: postal banking.

Baradaran said many low-income individuals do not have multiple banking options to choose from and are forced to pay high percentages to receive their money. For example, those who use paycheck cashers rather than a banking system pay up to 10 percent of their income to get their money. This, in part, is due to the fact that five or six banks control 80 percent of the country’s assets.

“I want to make the case that this is not just a market problem but a problem for our democracy,” Baradaran said. “Our banking system has never been completely egalitarian or accessible to everyone.”

Since the establishment of banks by the Founding Fathers, Baradaran said the banking system has been “entangled with the federal government.” She argued that banks could not function without the government.

“Trust is the currency of banking, and the government provides them this trust. It’s not a subsidy,” Baradaran said. “Saying federal support of banking is a subsidy is like saying the wheels of your car are a bonus feature. Banks don’t run without government support.”

However, Baradaran believes inequality is introduced into the system because of fees such as overdrafting charges that can make owning a bank account a risk. For example, she said $35 may be charged for an overdrawn account. That $35 will keep accumulating day by day, putting the account holder further into debt.

“You’re paying money you don’t have because you don’t have money,” Baradaran said. “A lot of the poor decide, you know what, it’s not worth it to me to have a bank account. I’d rather pay a check casher 10 percent of my check just so I can avoid those random, punitive charges.”

Baradaran also mentioned payday lenders or cash advance loans, an option often left as a last resort for individuals who need money for an unexpected emergency.

Though the stereotype may be that the only people using payday lenders are ignorant, criminals, or working on the black market, Baradaran painted a picture of a single mother in her mid-40s whose car broke down. The woman needs $500 to fix her car so she can go to work to pay the rent and buy food for her kids. That woman has no option but to go to a payday lender who charges an extremely high interest rate.

“They’re people who manage their money better than I do, who know where their money is, how much interest is going where, but they can’t just make ends meet,” Baradaran said.

Postal banking, however, would provide an alternative option for individuals without charging outrageous fees and interest rates, Baradaran said. As the banking system focuses on profit, Baradaran believes postal banking could be self-sustaining and focus on the needs of the people rather than accumulating profit.

Post offices are accessible in every region of the country and have been self-sustaining since before the creation of the Constitution, making them, in Baradaran’s eyes, the foundation of America’s democracy.

“Usury used to be based on moral principles, religious principles, i.e. it is wrong, morally wrong, to charge a desperate borrower 400 percent APR, and essentially now we talk about usury on purely economic terms, i.e. any interest rate is appropriate so long as there is a willing buyer,” Baradaran said.

The idea of postal banking in the United States was first proposed in 1871 by President Ulysses S. Grant’s postmaster, John Creswell. However, the nation’s bankers opposed the idea.

Over the course of 40 years, compromise and various bills were discussed to come up with a system that would both suit the needs of the people and the demands of the banking system. In 1910, postal banking was to be the poor man’s bank, which would only be allowed to charge 2 percent interest.

By 1913, the system was declared a success. By 1930, postal banks received double the number of bank deposits from previous years with a peak of $3.4 billion in deposits during 1947.

However, Baradaran said, postal banking saw a swift decline during the 1950s as the nation approached the “golden era of community banking” with a bank on every corner. Soon the post offices were left without the ability to do banking.

Little did the government know that decades later, limited banking options would again be a pressing issue of inequality, Baradaran said.

“We’re either going to have a Wal-Mart or a post office,” Baradaran said. “I prefer it be the post office. I trust the post more than Wal-Mart.”

Baradaran, however, remains hopeful the postal banking system will make a return. After an audience member asked if Baradaran works alone in her efforts to promote postal banking, Baradaran said she has teamed up with Sen. Elizabeth Warren from Massachusetts and Sen. Sherrod Brown from Ohio. She also said presidential candidate Bernie Sanders has taken up the idea of postal banking, which is also included in the democratic platform for the upcoming election.

Baradaran remains adamant in informing government leaders and citizens about postal banking as a way to help bring low-income individuals into the banking system.

“If we’ve got people who are struggling instead of throwing them a lifesaver with a low-cost loan, we’re giving them an anchor that sinks them further into debt,” she said. “That’s not the country I think we want to be living in.”