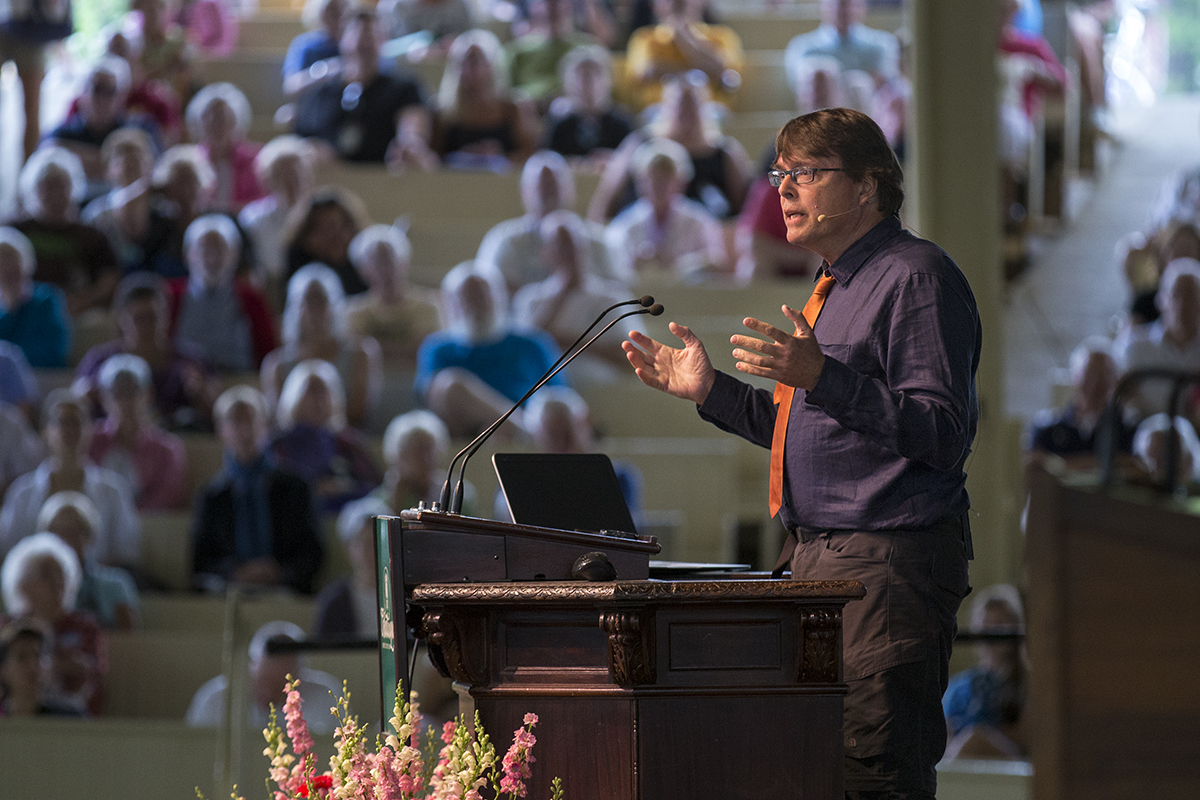 According to journalist Charles C. Mann, scientists must think of the search for another Earth from an ecological standpoint prior to exploration.

Mann explained the impact finding another Earth could have on both planets during the 10:45 a.m. Tuesday morning lecture in the Amphitheater.

Mann discussed the consequences and biological changes that occurred after Christopher Columbus discovered the Americas during his voyage across the Atlantic in 1492. That voyage led to European colonization and the exchange of diseases, crops and resources — sometimes referred to as the Columbian Exchange.

In Mann’s eyes, the discovery of the Western Hemisphere and the global changes that occurred in consequence serve as an example for the momentous changes a new Earth could face if scientists do not consider all aspects of exploration.

“This was a fully fledged new world,” Mann said. “One of the things that I would suggest is that when we, or if we, encounter another world, we should think of it as much in biological terms as anything else.”

Explorers who traveled to the New World brought a number of diseases, which Mann referred to as “hidden passengers,” including smallpox, measles, whooping cough and malaria. Many of those diseases derive from animal ancestry and “jump the species barrier” to become human diseases, Mann said.

Mann shared a picture of a European household in Columbian times. The windowless house was occupied by both people and domestic animals.

“All these people in Europe and Africa and Asia were swimming in this kind of bacterial and viral soup of their domestic animals,” Mann said. “There were very few domestic animals in the Americas at the time of Columbus.”

One hundred fifty years later, more than two-thirds of the original inhabitants of the Americas were dead as the diseases “exploded like chains of firecrackers” across the continent, Mann said.

“This encounter with the New World had catastrophic results for one of the worlds,” Mann said. “It resulted in the greatest demographic catastrophe in human history. This catastrophe rippled out in ways that we are still trying to understand.”

Mann also discussed the impact Columbus’ discovery had on the climate of the New World. Prior to discovery, there were large areas clear of trees for agriculture. Native Americans used a burning technique to keep parts of land cleared.

After Europeans began to colonize the Western Hemisphere, Native Americans began to suffer from the various diseases brought to the New World, which prevented them from practicing their burning technique.

As a result, many of those areas began to transform into forests, and Mann credited the great Eastern forest to that change in landscape.

Those changes eliminated the carbon dioxide emitted into the atmosphere by burning. The growing amount of trees also absorbed carbon dioxide, which caused the temperature to drop. From 1550 to 1850 the Americas experienced a three century-long cold snap.

“What literally happened from this encounter with another world was completely world-changing,” Mann said. “It changed the climate of the Earth. This was about as big a disruption as you can imagine.”

However, Mann said, the discovery did not have all negative consequences. For example, finding the New World led to globalization and world trade. He specifically discussed the impact of the exportation of potatoes to European countries, an unlikely consequence.

Potatoes led to a rising population in Europe, a continent that previously relied on wheat. Potatoes contain four times more calories than wheat and were able to provide a more sustainable food source.

That stabilization led to the conquest of the European empire. Mann said the finding of the New World set off a chain of consequences no one expected, which he said is the issue disruption could create if scientists discovered a new Earth.

The impact of the New World continued further with potatoes when Chinese workers mined the Chincha Islands in Peru for a fertilizer called guano, Mann said. When the fertilizer was exported to Europe, a hidden passenger migrated with it: potato late blight.

The potato disease spread across the continent, killing a couple million people, Mann said. Ireland was so badly affected by the potato famine that in 1840, the population of Ireland was larger than it is today, though the borders remain roughly the same.

Mann said many historical events can be connected to Columbus, including the movement of people from Africa, which he credited as the largest and most consequential in human history.

“I would argue, when we’re talking about another world, that before we even think about that we should really try and imagine what the consequences of already encountering one world were in the past and how they live with us today,” Mann said.