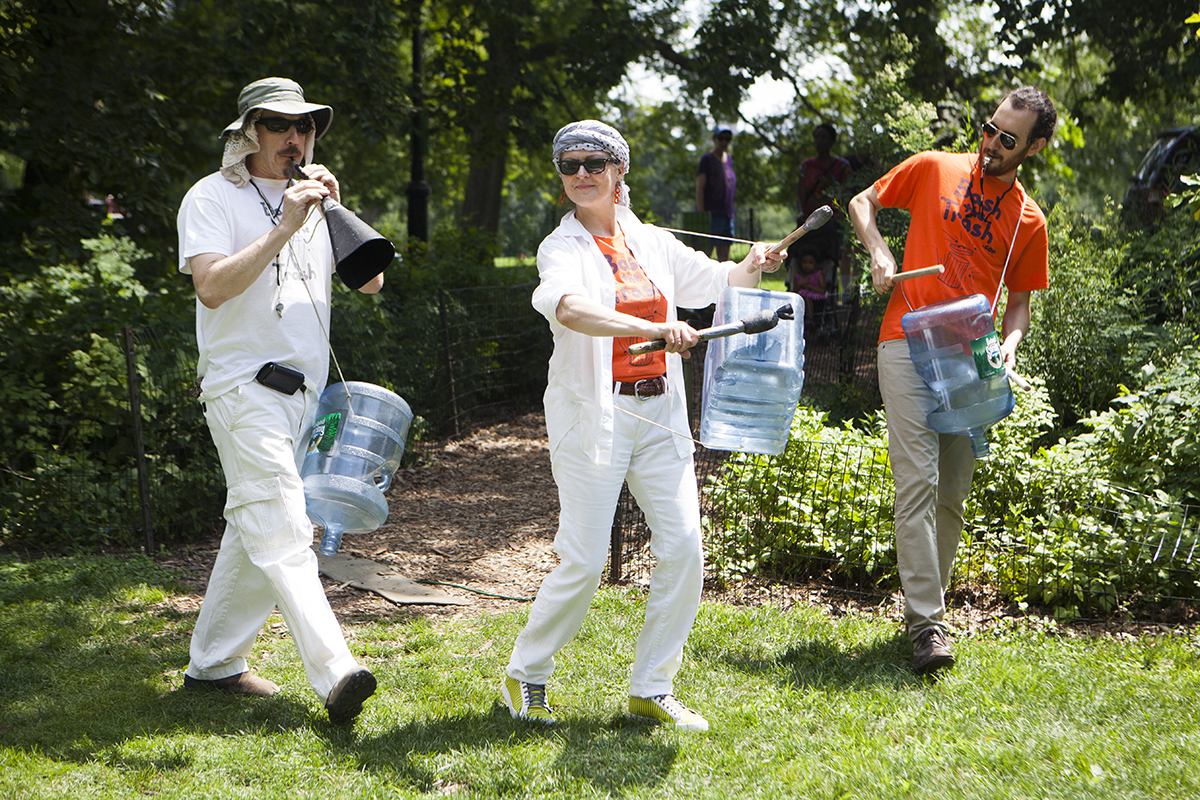 On July 26, John Bertles will be a playing a plastic straw.

Bertles, along with his wife, Carina Piaggio, is the co-founder and co-director of Bash the Trash, a group of musicians who make their instruments from reused common objects, the titular trash. They’ll be performing at 5 and 7 p.m. July 26 in Smith Wilkes Hall as part of Chautauqua Institution’s Family Entertainment Series. Two additional mini-performances will take place for Boys’ and Girls’ Club in the afternoon, starting at 1 p.m.

The plastic straw in question is what Bertles calls a “straw oboe.” It’s made by taking a drinking straw and snipping it into a point at the top. Holes are cut along the straw with a pocketknife and it becomes a multi-pitch instrument. The version Bertles will be playing tonight has a truck oil funnel added to the bottom.

“It sounds annoying, but it’s a great musical instrument and, you know, kids can take it and play it anywhere,” he said.

Bertles said the group’s mission is based around the three S’s: sound, science and sustainability.

“The way we do this is not by lecturing people in how to be an environmental person,” he said.

He said they’re instead modeling the concept by creating their recycled instruments.

Bash the Trash regularly goes into classrooms and conducts workshops, which range in commitment from a couple of workshops to almost weekly events. They also perform at schools and performing arts centers. Some of their work in the schools involves helping the students build their own instruments.

For their performance at Chautauqua, they’ll be bringing both education and entertainment to the table. Audiences can expect content aimed at adults, as well as children, and filled with audience interaction.

Bash the Trash has performed with famed cellist Yo-Yo Ma, who played their fishing line strings with his expensive bow.

The straw oboe is one of the group’s simpler instruments. Another, the styrobass, takes a bit more to construct.

The appropriately named styrobass, which Bertles will also play tonight, is made from the styrofoam packaging of a computer monitor. The styrofoam makes up the body of the bass, while a two-by-four piece of wood is used for the neck. The strings are weed whacker cords, and they’re tightened by turnbuckles from the hardware store that cost $1.50 each, which Bertles said is pricey for Bash the Trash supplies.

“It sounds almost as good as a real bass,” he said.

Bertles has always had this DIY spirit. As a kid, he made his own James Bond toy out of wood in his basement instead of buying the plastic versions that everyone else had.

He hopes the audiences will create homemade instruments for themselves after seeing the show.

“You inspire kids to not look at things and close boxes but rather to open your horizons,” he said. “So [to use] the tools that you’re given, the educational tools of science, of math, of, you know, cultural studies and then applying it in ways that open up the imagination rather than restricting it.”