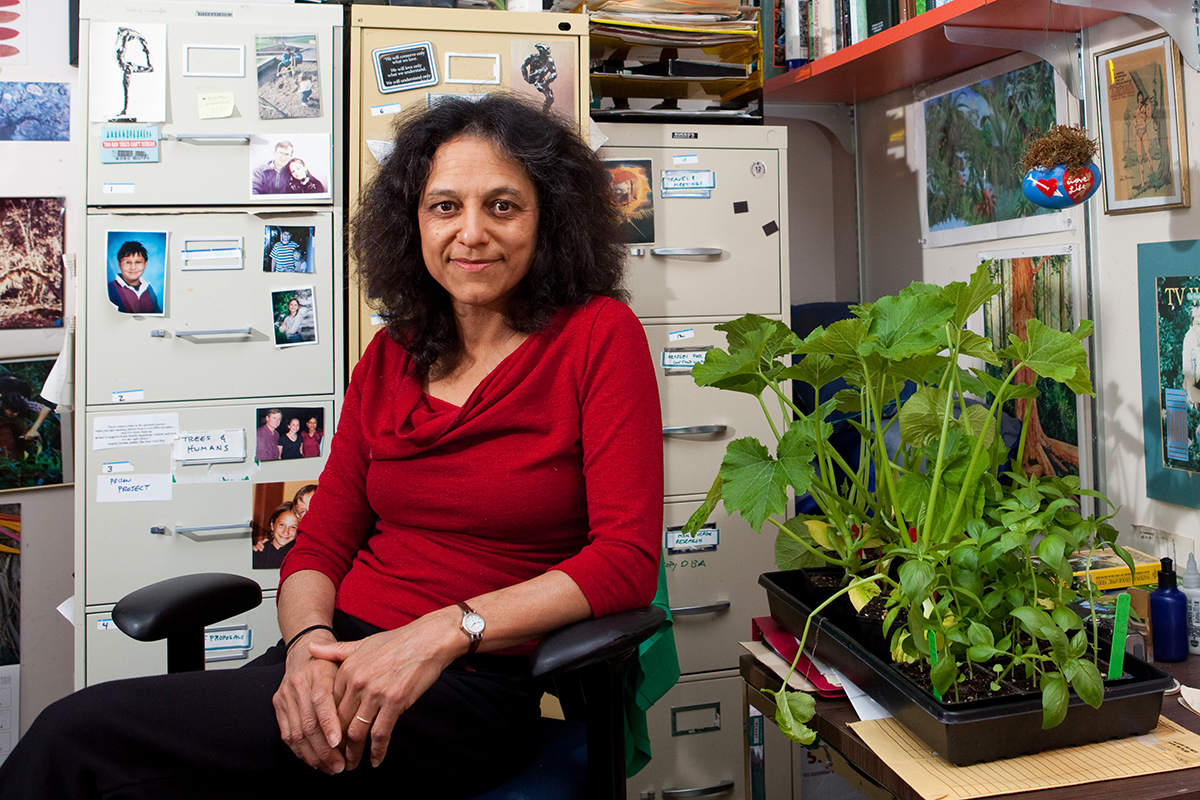 Nalini Nadkarni is one half of Procryptocerus nalini, a species of ant her ecologist husband named after her. This particular ant inhabits twigs of the tropical rainforest, has hair all over its body and glides from tree to tree.

Nadkarni is none of those things; she teaches at University of Utah, has a normal head of shoulder-length hair and has to actually climb things.

So, despite her husband’s gesture, she’s less interested in the ant than the trees they live in.

Nadkarni, the so-called “queen of forest canopy research,” will lecture at 10:45 a.m. today in the Amphitheater on her pioneering work with trees.

Nadkarni said her tree infatuation started with a handful of maples at her childhood home. Most days she would ditch her school things, climb up their trunks and read a book or eat an apple.

She didn’t realize trees were a job, though, until she had a professor who studied damselflies. When he wasn’t teaching, he sat by a stream watching the flying insects mate. Then he’d write papers about what he saw.

That was a crazy idea to Nadkarni, so she decided to do the same with trees.

A Ph.D. in forest ecology followed, and Nadkarni proposed looking beyond the “ankles” of the forest to the mist-filled canopy. Her committee wasn’t too keen on the idea at first.

“There was this real sense that the canopy was this extension of what we see on the forest floor,” she said.

Within that frame, it didn’t make sense to hang from a tree to study what you could observe with two feet on the ground.

Thankfully her request came at a time when getting up into trees was easier and cheaper than ever. For only a couple hundred dollars, Nadkarni adapted mountain climbing equipment and started shimmying up tree trunks into the rainforest canopy. There she discovered sights, species and microenvironments that form the new research area to which she has devoted three decades of her career.

Now, researchers hoist themselves into the canopy with winches, cranes and hot air balloons. From those heights, raindrops typically reach a field assistant 10 minutes later at the bottom of the tree, Nadkarni said, demonstrating the very real divide between canopy and forest floor.

Up top, the canopy is like a field: “It’s a feel of openness like when you go up to the top of the Space Needle or when you go to a penthouse apartment and you look out,” Nadkarni said.

Below, the forest floor is dark and stuffy. Then there’s the in-between, where the two extremes mix to form a forest chiaroscuro.

“When I walk through a forest now, it’s not just looking at the ankles of the forest — the trunks, the trees we encounter at our 6-feet level,” she said. “Rather, it’s looking higher to understand this complex ecosystem as a whole.”

Nadkarni is adamant those trees intersect with human lives in important and poignant ways, even if someone hasn’t peeped their head through a canopy themself.

For one, trees are necessary. Nadkarni noted how forests serve as a carbon sink, sucking excess carbon dioxide from the atmosphere to address one of the primary causes of climate change. Forests also account for some 80 percent of the world’s biodiversity, according to the World Wildlife Fund.

Trees are medicinal: More than a quarter of all plants find their way to medicine. The cancer drug Taxol, for example, is derived from the cowtail pine that thrives beneath the canopy.

Trees are spiritual: The first chapter of Genesis establishes humanity’s responsibility for the environment, Nadkarni said, and the forest canopy serves as physical reminder of that connection.

Trees are therapeutic: Nadkarni recently completed a study with prisoners in solitary confinement. Usually, those inmates spend 23 hours each day in their cells and one hour in a blank, white room where they’re allowed to exercise. Half of a cell block was exposed to nature videos, while the other half was shown nothing. Not only did the video group report lower levels of anxiety, they committed about 26 percent fewer violent infractions.

“The people who really need this contact with nature the most are sequestered completely in the system of mass incarceration,” Nadkarni said.

That cell block is admittedly a far cry from the misty tree tops where she started this work, but Nadkarni said connecting others with nature is just another part of the job description.