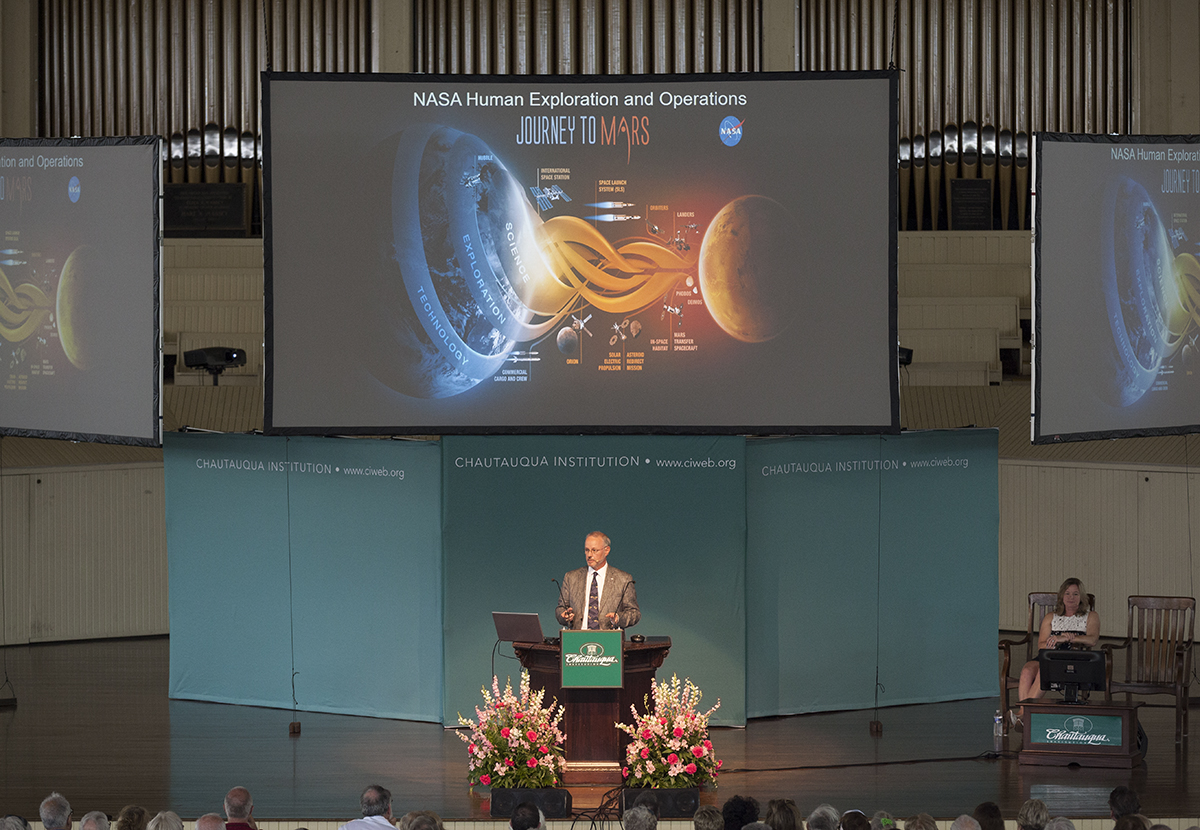 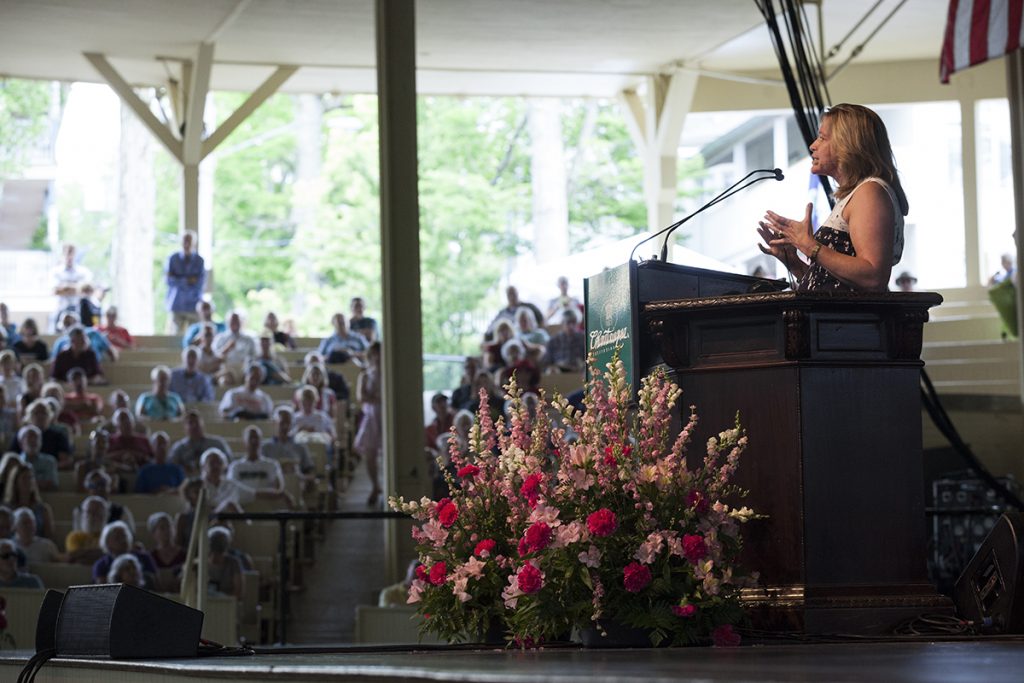 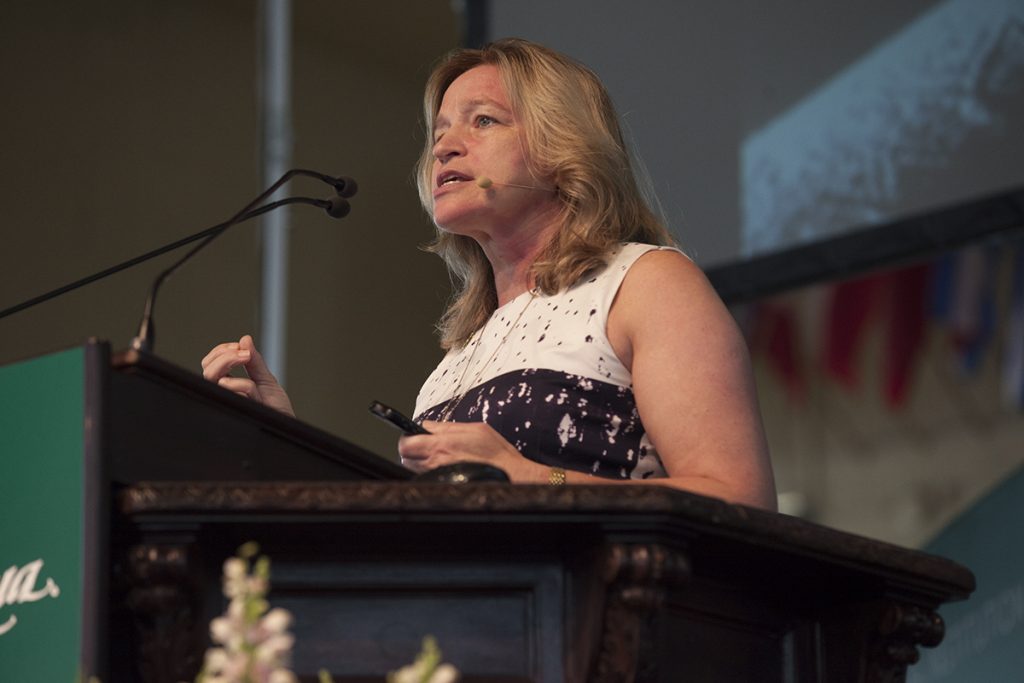 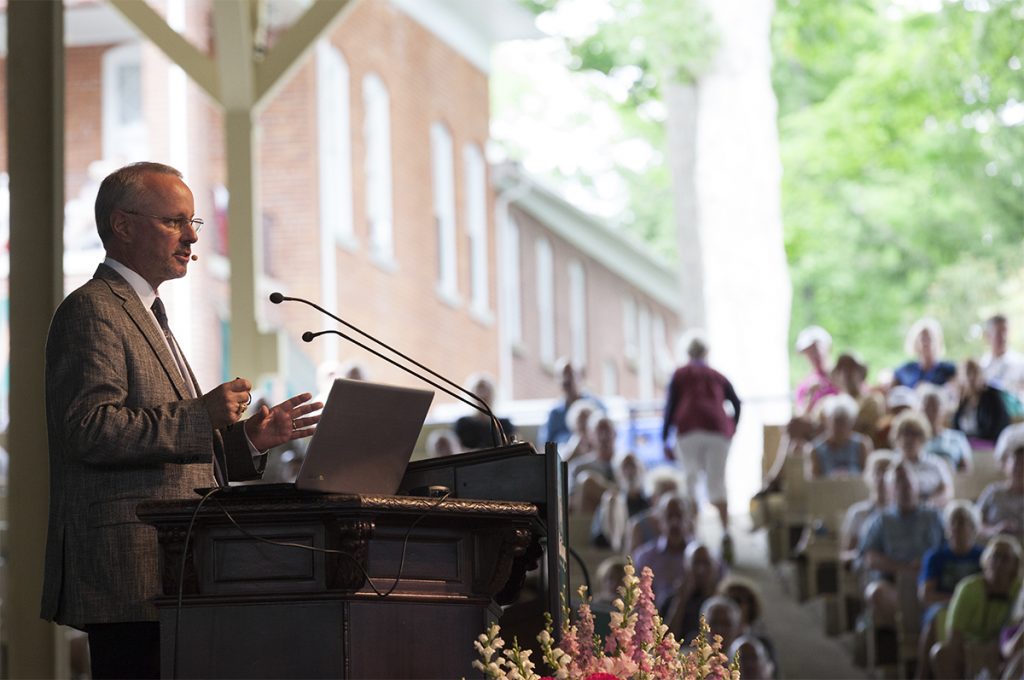 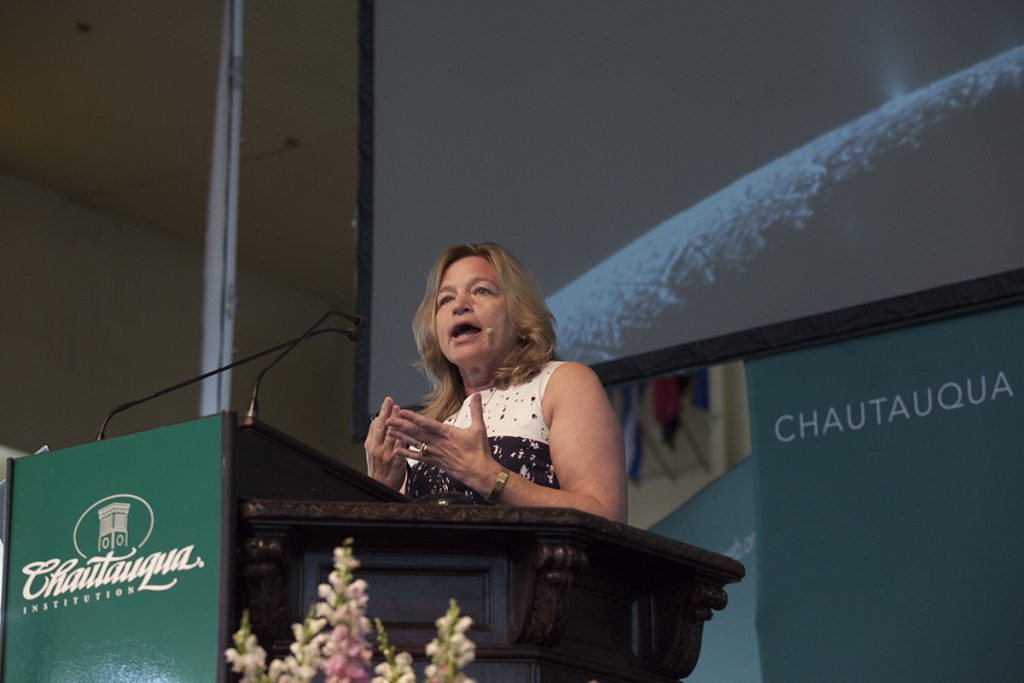 A thumb held up against the night sky would block out the area the Kepler Spacecraft has explored in the last four years.

From a human’s perspective on Earth, that small section of the night sky may seem like an insignificant accomplishment, but that area occupies hundreds of stars and more than 2,000 confirmed exoplanets.

NASA’s Chief Scientist Ellen Stofan and Chief Technologist David Miller spoke about the study of potentially habitable planets and the research of Mars during the 10:45 a.m. July 22 morning lecture in the Amphitheater.

“I grew up in a world where we had nine planets,” Stofan said. “Kepler has revolutionized that because now we know that just about every star you see in the night sky has not just a planet around it, but likely a planetary system.”

NASA will uncover more information about those planets discovered by Kepler with the launch of the James Webb Space Telescope, which is projected to launch in fall 2018.

Stofan said that projected telescope will allow scientists to look at the atmospheres of exoplanets. Scientists are specifically looking for water, methane, carbon dioxide and other gases that are indicative of life.

“It’s really that question of ‘Are we alone?’ that I think humanity has wondered about ever since we could look up into the night sky,” Stofan said.

Miller said the James Webb Space Telescope will allow scientists to “peer into space” and learn more about the beginning of the first galaxies born.

Technology at NASA does not only improve the lives of astronauts and provide useful tools to help scientists better understand the universe, it also improves the everyday lives of Americans, Miller said. NASA technologies have improved smartphone cameras, created new additives found in baby formulas and boosted the growth of computer use across the country.

Miller said technology continues to improve and NASA continues to hit milestones in space exploration. He referred to the landing of Apollo 11 on the moon, which occurred 47 years ago Wednesday.

Miller, who has grown up visiting Chautauqua in the summer, remembers watching the broadcast of the landing on the moon from his house in Chautauqua.

“The mission of exploration and the discovery was not only about the moon, but also about our planet Earth and ourselves,” Miller said. “It was journey to look outward, inward and homeward.”

It was a monumental landing for the United States;  today, scientists are eyeing another journey. This time, they want to travel to Mars.

Stofan said evidence shows Mars once had an environment that could have hosted life, as water flowed on the Red Planet as recently as 3 billion years ago. Though water was present on Mars for several hundred million years, water began to disappear around the time life began to form on Earth.

The planet grew colder after the loss of its magnetic field, which resulted in loss of water either into space or below the surface of the icy desert.

The Curiosity rover has been “reading each of those layers of rock like they’re a page in a history book” in attempt to uncover the history of Mars, Stofan said.

Miller believes the journey to Mars will be much easier if nations come together to collaborate on ideas to make the mission possible. Technologists are currently creating a new space launch system, riding crew capsules, launch vehicles for cargo and deep space habitation systems.

“It requires participation of our international partners not only because of its monumental scale, but also because it creates opportunities for nations to collaborate instead of compete,” Miller said.

In the mid-2020s, Miller said NASA will be testing the tools created for the Mars journey within the vicinity of the moon.

“The ultimate goal is to create a permanent human presence beyond Earth,” Miller said. “Throughout history, humanity has been confronted with crossing great rivers, traversing high mountain ranges and sailing vast oceans. Each time we’ve accepted that challenge, civilization has benefited.”

Since the 1960s, the world has been trying to explore Mars. Today, the United States is the only nation to have succeeded in landing operational robotic spacecraft on the Red Planet.

A member of the audience asked the speakers about NASA’s concern for climate change. Stofan replied that it is one of NASA’s top concerns. Currently, 19 satellites surround Earth analyze the atmosphere and look into data to predict the future of Earth.

Stofan said NASA and the National Oceanic and Atmospheric Administration released a report stating every month in 2016 has been the hottest recorded in history. Some of the results of this increased climate include the melting of the polar ice caps and the drought in California.

“This is a huge priority for NASA, and we spend a lot of our research dollars trying to understand climate change and trying to figure out how to make this country and countries around the world resilient to the effects of climate change,” Stofan said.

Although Miller said the idea of global climate change can be paralyzing, it is an issue that can be overcome if the world works as a unit to combat climate change.

“There’s a number of these problems that when we actually work together on the international stage, we can actually make some very good progress,” Miller said.

Though a way to reverse the effects of climate change has not been discovered and many of the attempts to land unmanned spacecrafts on Mars have failed, Miller believes failure is part of the learning process.

With failure, scientists can understand how to improve technology and work through trial and error to ensure someday they will succeed.

“The way I see it is that the only experiments or missions that we fail are the ones we fail to learn from,” Miller said. “If all you do are things that succeed, then maybe you weren’t pushing hard enough because you learn a lot more through failure about yourself, about the technology, than you actually learn through success.”

A Column From President Becker