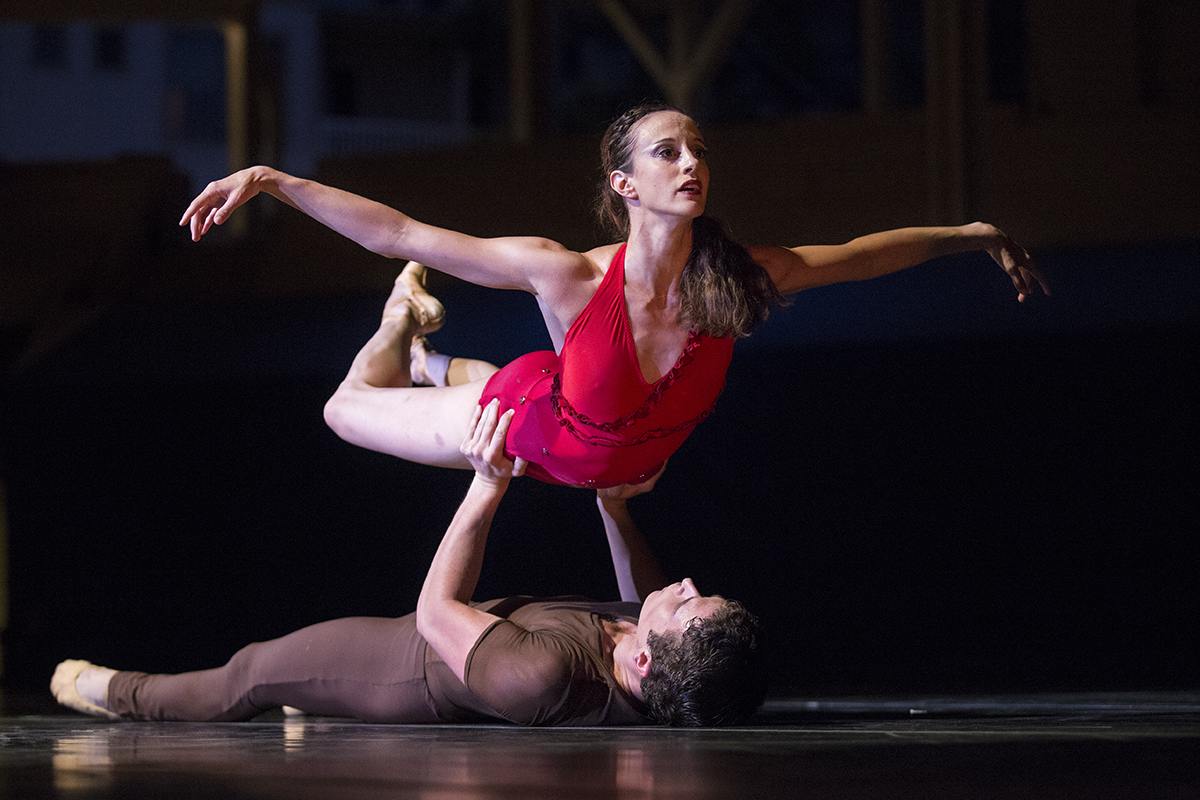 Charlotte Ballet’s first joint program of the season with the Chautauqua Symphony Orchestra on Tuesday night at the Amphitheater showcased six ballet works from prior seasons. And although the ballets weren’t new, many of the dancers performing them were.

Several of Charlotte Ballet’s newcomers took the stage in the program’s first ballet, “Three Overtures” choreographed by outgoing Charlotte Ballet artistic director Jean-Pierre Bonnefoux. Set to music by Hector Berlioz, the classically styled ballet was in the vein of ballets prevalent in Bonnefoux’s heyday as a principal dancer in the 1970s with the Paris Opera and New York City ballets. The vibrant and elegant piece put its cast of 13 through their paces in buoyant jumps, an acrobatic trio with fellow newer company members Juwan Alston and Ben Ingel. The third, Baltimore-native Sarah LaPointe’s long limbs and delicate hands created gorgeous lines that were enhanced by formidable leg lifts that saw her foot nearly brush back her ear.

Although “Three Overtures” was decidedly classical, company Associate Artistic Director Sasha Janes’ “We Danced Through Life” took a more contemporary ballet approach. Commissioned for Charlotte Ballet by Chautauquan Terrie Vaile Hauck in honor of her late husband Jimmy and their relationship together, the poignant ballet portrayed a loving couple who relished each other’s company, only to see that relationship cut short by a fatal illness. Performed marvelously by Hayes Harkins and dancer David Morse, Janes’ choreography captured the joy and happiness, concern and sorrow of the relationship in its carefully measured dance steps. The pair entwined in each other’s arms and moved through inventive, off-angle lifts and holds with adroit skill. The ballet’s final image of Hayes  Harkins in a lit doorway and Morse fading into darkness, was all too moving for anyone who has lost a loved one.

Most familiar to Chautauqua audience members who have frequented Charlotte Ballet’s performances in the past several summer seasons was Janes’ memorable Lascia la Spina, Cogli la Rosa. The striking pas de deux, danced this time by James and Hall, was one of the first ballets to announce Janes’ special talents as a dancemaker. Deliciously crafted embraces, lifts and partnering sequences spilled over the stage as soprano Elena Perroni and the CSO stirringly performed George Frideric Handel’s music for the ballet.

Under the baton of conductor Grant Cooper, the CSO was solid in its renditions of each of the compositions on the program, none more stirring than the program’s closer Maurice Ravel’s iconic “Boléro.”

Choreographed by Charlotte Ballet II Director Mark Diamond, “Boléro” the ballet was an unusual contemporary version mixing humor and fiery Spanish attitude a la flamenco dance and Bizet’s “Carmen” along with something rarely seen in dance versions of “Boléro” — a storyline. Diamond’s ballet told of a border village on a hot summer afternoon where the men in sombreros were aroused from their siestas by a group of young, bored women looking to take their passions and frustrations out on them. The result was a rollicking ballet for 15 dancers that mixed sensuality, conflict, machismo and animalistic hunger with Ravel’s spellbinding music.

Diamond’s choreography, a peculiar stylistic mish-mash at times, had its moments of brilliance. Its mix of prop humor, with the ladies alluringly teasing the men with their stolen sombreros, and drama in over-the-top emotion that had the women, led by James, and the men, led by Hall, teetering on strangling or ravishing each other was thrilling.

The ballet, like Ravel’s score, built in intensity that climaxed in a final tableau with James being thrust into the air from the middle of a circle of dancers, one arm raised with clenched fist as the music ended and the audience en masse rose to a standing ovation.