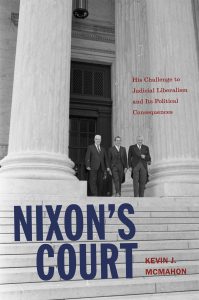 Republicans and Democrats alike often lament what they see as the growing politicization of the U.S. Supreme Court.

Historically, the court has kept the appearance of being above party politics, but its justices do, in fact, advance political agendas. And those agendas usually reflect the ideological bent of the president who appointed them. Whoever wins the presidential election this November will have the opportunity to reshape the court, and consequently much of American life, for many years to come.

How does a president — or presidential candidate — use the Supreme Court to advance a political agenda?

It is a question that Kevin J. McMahon, a professor of political science at Trinity College in Hartford, Connecticut, has long studied and has addressed in two books. At 3:30 p.m. Friday in the Hall of Christ, he will examine the issue in Nixon’s Court: His Challenge to Judicial Liberalism and Its Political Consequences, part of the Oliver Archives Heritage Lecture Series. His 2011 book of the same name, published by the University of Chicago Press, won the prestigious Griswold Prize from the Supreme Court Historical Society in 2014.

Most historians have maintained Richard Nixon tried and failed to reverse the liberalism of the Earl Warren Court of the 1960s. McMahon contends Nixon was more interested in a political agenda than in ideology and that his judicial strategy succeeded, not just in influencing legal decisions, but in laying the groundwork for a coalition of conservative Republicans and blue-collar Democrats that redefined the American electorate.

“Nixon was successful on both counts,” McMahon said. “He used the Supreme Court for political reasons to attract voters who were not so much interested in the whole conservative cause but were concerned about criminal justice and school desegregation. People talk about the effectiveness of Nixon’s ‘Southern strategy,’ and while that is certainly true, the rest of the story is taking place in the Northeast and the Midwest, where he appeals to people who feel culturally disrupted by the events of the 1960s and ’70s.”

In his election campaign of 1968, Nixon focused less on school prayer and abortion, traditional conservative issues that he strategically conceded to George Wallace, McMahon said. Instead, Nixon turned his attention to Americans who had long voted along economic lines, but were now more concerned with social issues.

“There were a string of decisions in the 1960s, Miranda [v. Arizona] being the best-known case, that were seen as handcuffing the police at the same time that crime was rising across the country,” McMahon said. “And with desegregation came court-ordered busing.”

Nixon stoked the alarm many Americans felt over those changes and managed to win the presidency. He then appointed justices who rolled back some of the work of the liberal Warren Court.

“The court in the ’70s gives the police a little more leeway and reinstates the death penalty, which was struck down in 1972 as unconstitutional,” McMahon said.

With four Nixon appointees sitting on it in 1974, the Supreme Court ruled in Milliken v. Bradley that students could not be bused across city or town lines for the purpose of integrating schools.

“Detroit was about 80 percent black at that time, so how are you going to desegregate its schools if you can’t cross city lines?” McMahon said.

How much Nixon sincerely believed in the causes he espoused and how much was cynical political maneuvering is hard to judge.

“Sometimes he seemed genuinely committed to these issues and other times he used them as political tools to win votes, to secure re-election,” McMahon said. “Nixon was not like Ted Cruz. He was not an ideologue. He was conservative by nature, but he was not willing to suffer electoral defeat to achieve conservative goals. Franklin Roosevelt was driven by ideology. Nixon was driven by the politics of the matter.”

McMahon believes the Supreme Court has become more politicized since Nixon’s time. Politicians, he said, increasingly identify certain legal issues to attract voters. With the aging of Justices Ruth Bader Ginsburg, Stephen Breyer and Anthony Kennedy, and the opening created by the death of Justice Antonin Scalia in March, the next president will have a dramatic impact on the court for a generation, he said.

“The same type of politics and nastiness and delay was going on in 1968 and 1969 as it is today,” McMahon said. “It’s very similar to today.”

Morning Worship Column: If You Don’t Have Much Faith in the Future, Look in the Rearview Mirror