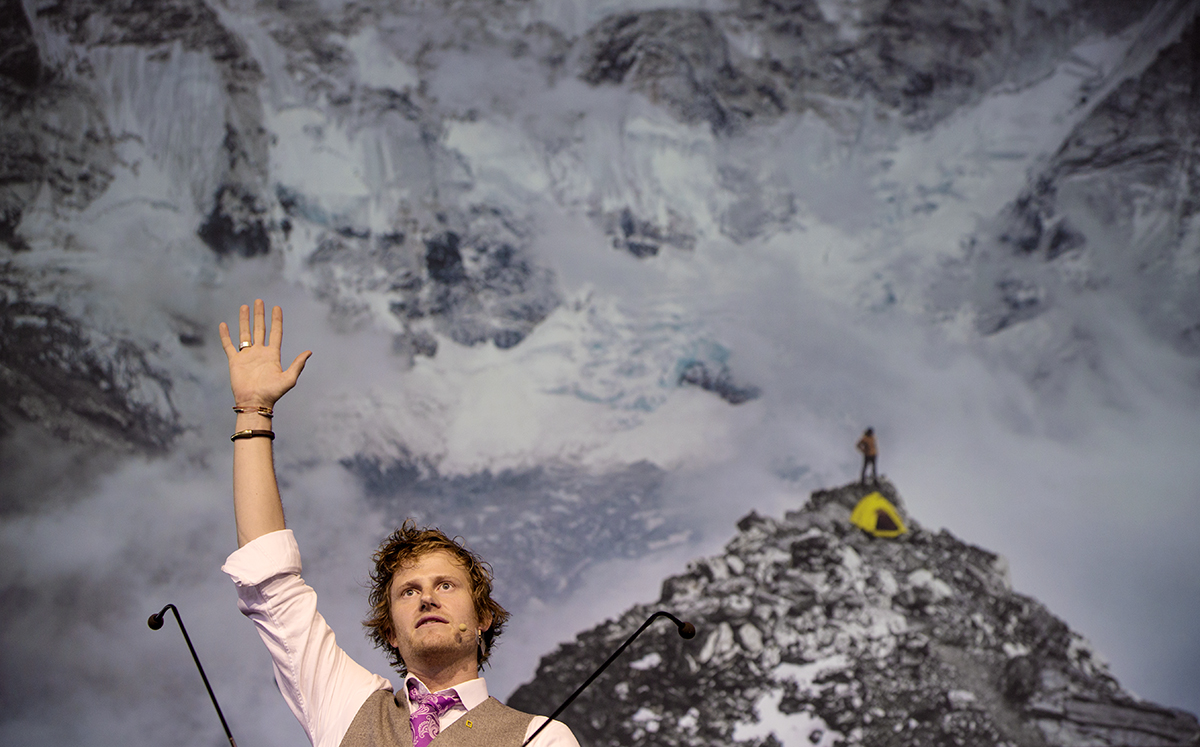 Cory Richards’ life changed in 2011 with the force of an avalanche. Richards nearly died on his way down Gasherbrum II, the 13th tallest mountain in the world.

The force of the avalanche hit him like a “freight train,” Richards said, and it continues to affect his personal life and career today.

During the 10:45 a.m. Wednesday morning lecture in the Amphitheater, Richards, a climber and visual storyteller, talked about post-traumatic stress disorder and how it affected not only his relationships, but the way he sees the world.

“The brain doesn’t know the difference between an explosion or a car accident or an avalanche,” Richards said. “I started to feel a certain amount of disassociation and withdrawal, even confusion. It was a deafening silence. It was a weight that I couldn’t quite explain to anybody.”

When Richards returned home from Pakistan, he got married and tried to continue living a normal life, only to feel withdrawn and secluded without understanding why.

Richards’ “selfie” he took of himself after the avalanche received national attention and was published on the cover of National Geographic. A documentary, titled “Cold,” was released later that year, capturing the journey to the top of the mountain where Richards and two others became the first people to climb the peak in winter.

Richards would reintroduce himself to people he had already met two or three times before. He later found out memory loss is a side effect of PTSD.

“Life was continuing to fall apart, and I didn’t understand,” Richards said. “When I was in the field, I was so invigorated, and I was vibrant, and I felt ignited. I felt stimulated constantly, visually. I’d come home, and my life was divided. I couldn’t understand a single thing people were saying.”

The more Richards withdrew himself, the more he understood the direction his marriage was heading. He showed the audience a photo he took of his wife’s arms stretched out as she took a photo on an iPhone. The image on the phone’s screen showed the city buildings and lights. It cut out the massive crowd she was taking the picture above.

“She was trying to get the pretty stuff, get the clutter out,” he said. “I’ve never felt in my life more alone and more withdrawn. It was only photography that helped me through that.”

Richards came to terms with his PTSD when he went on a 150-mile journey through the jungles in Myanmar, a country formerly known as Burma in Southeast Asia. After hiking 30 days through the jungle, he could see the mountain.

The goal of the journey was to climb some of the tallest mountains in the right corner of the Himalayan Mountains and map a new route to the summit, or highest peak, of one of these mountains.

“Something inside of me was fighting this experience,” Richards said. “I realized I was back in an environment where I related it to an avalanche that nearly killed me. All of a sudden my experience with the mountains had a darkness.”

After a 40-day journey, the group finally saw the top of the summit, but were too tired to carry on. They knew if they continued without proper rest, food or gas, they would likely freeze to death on the mountain top. The group never reached the highest peak.

During his journey, Richards came to terms with his failing marriage. He knew there was something deep inside of him that was broken, making him think of himself as unlovable. Richards and his wife divorced, and he went through therapy to deal with PTSD.

Richards decided to take another expedition to the mountains to fully face the root of the issue that was consuming him. He decided he was going to climb Mount Everest, the highest mountain on Earth.

On May 24 at 6:34 a.m., Richards reached the summit. He stood on the tallest peak on the tip of his toes, reaching toward the sky.

“This was a coming home to me,” he said. “I wanted to go and experience the place that had set this in motion — that had fragmented my life so dramatically. My career had gone so steeply uphill, and my personal life had crashed and burned. I needed to reconcile. What better place to do it than on top of the world?”

It took Richards two months to reach the summit of Mount Everest, and he began to remember why he loved the mountains. As he surrounded himself with nature and the beauty of the world, it made him care about the direction the planet is heading.

The difficult part is putting these words into action, Richards said. Through his photography, he has learned about kindness, compassion and love. To him, these three emotions are what the world is about and what makes the world work.