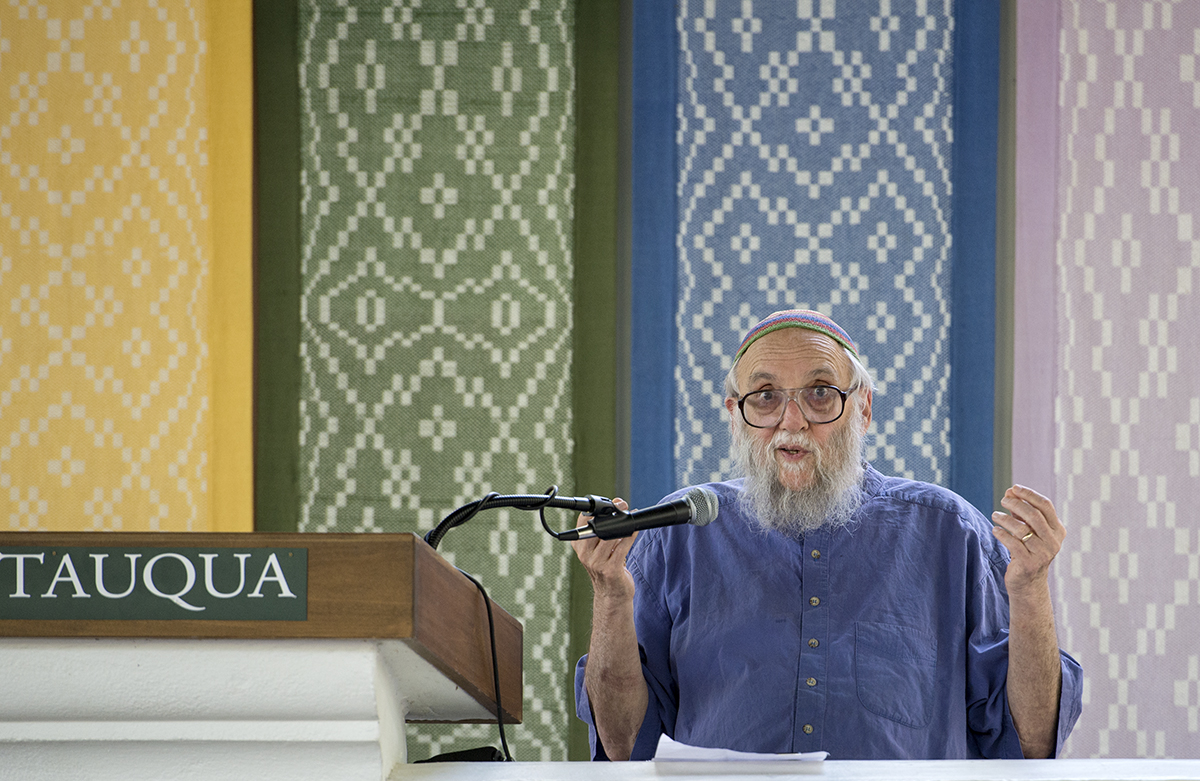 Eighty-three-year-old Rabbi Arthur Waskow has a longer arrest record than the average drug dealer, and he’s proud of it.

Waskow’s most recent, his 23rd, came in front of the White House three and a half months before coming to Chautauqua, at the same protest that saw Ben Cohen and Jerry Greenfield (Ben & Jerry), NAACP president Cornell Brooks and actress Rosario Dawson walk away in handcuffs.

Waskow was protesting, among other things, the influence of money on politics, one of the topics he touched on in the Tuesday afternoon Interfaith Lecture at the Hall of Philosophy. Rabbi by title but activist and spiritualist by trade, Waskow brought a theistic approach to the fight against climate change and corporate money in politics, calling for the replacement of money with the breath that is the currency of all life.

An early leader of the Jewish Renewal movement that sought to reinvigorate American Judaism in part through study, mysticism and music, Waskow sang before he spoke. He belted the second verse of “America the Beautiful,” which he said was the only patriotic song that actually said what patriots should do.

“Notice [patriots] are not simply to celebrate, but to cooperate with God in mending the flaws of the [country],” Waskow said.

The notes set the tone for a lecture in which Waskow repeatedly implored Chautauquans to take on greater civic responsibility.

Waskow first drew inspiration from the Gospels. He began with the “Render unto Caesar” story in which two Pharisees ask Jesus if Jews should pay Roman taxes, given that Roman coins bear an image of Caesar and the inscription “God.” Jesus responds, “render unto Caesar that which is Caesar’s and unto God that which is God’s.”

Waskow combined that with a Talmudic story, in which a rabbi asks, “What does it mean that God created man in his image?” The answer: When Caesar prints his image on a coin they all come out the same. When God prints in his image they all come out different. God’s coins, in other words, the currency bearing his face, are human beings.

Arguing that Jesus knew of that rabbi and the lesson, Waskow put the two stories together. He said although we are used to the top-down coins of Caesar, printed by a government, the lesson shows that there is another coin, a bottom-up currency that comes from each divine human being. In a time when money’s influence is growing, he implored people to embrace the bottom-up currency.

“Is there a way in which money we use … could come through the image of God and not stamped from the image of Caesar?” Waskow said.

The answer, Waskow said, lies in part in God’s name. For centuries, English speakers have pronounced the Old Testament God as Yahweh or Jehovah, but that is imprecise, Waskow said. The spelling in Hebrew is actually Yud–Heh–Vav–Heh, without any vowels. That transliterates, roughly, to YHWH. In Jewish tradition, it is not allowed to be pronounced, so Jews generally say “Adonai” — “Lord” in Hebrew.

But Waskow prompted the crowd to try and pronounce YHWH without any vowels. The result, he said, is a whirring sound: simply breath. If that’s the case, Waskow said, then the name of God can be said and understood by every language because breath is the one universal word. Every life form that breathes, including plants and animals, can say God’s name, Waskow said.

Rather than the image of God conjured by “Lord,” that of a king and his servants, Waskow endorsed an image of God as breathe, the life force of earth. Plants breathing out oxygen for animals to breathe in; animals breathing out carbon dioxide for plants to bring in.

He applied that image to the current climate crisis, what he calls “global scorching” (“global warming sounds too pleasant”).

“What if we think about [interpersonal breath] in this moment of human and planetary crisis, when that inter-breathing of carbon dioxide and oxygen, which is what keeps the planet going, alive, has been corrupted and deeply wounded by some institutions of the human race figuring out how to pour more [carbonyl sulfide] into the atmosphere faster than the trees and grasses can transmute into oxygen?” Waskow said. “I’ve come to think that what we come to call a climate crisis is actually a crisis in God’s name.”

How does one cure a divine malady? Waskow’s answer is to use God’s coins, human beings endowed with that inter-breath, to overcome Caesar’s coins, the corporations and moneyed interests supporting fossil- fuel consumption.

An activist who cut his teeth fighting racial segregation in the South, Waskow gave examples from his own history where he combined ritual observance with secular liberation.

He implored people to not only attack what he called the “corporate carbon pharaohs” but also to build new, alternative, better ways of living. In the 1960s, Waskow said, they imagined restaurants that weren’t segregated and by simply sitting down at a lunch counter they made it a reality, daring others to stop them. Today, Waskow calls for people to build neighborhood solar co-ops, among other measures to combat climate change.

“The notion of feeding money from society as a whole to neighborhood co-ops to transform what money can be used for, seems to me is putting a different image on the coin,” Waskow said. “It puts the image of the breath of life on the coin. It puts image of us looking at each other, neighbors acting neighborly and creating democratic communitary base for challenging Caesar’s coin.”