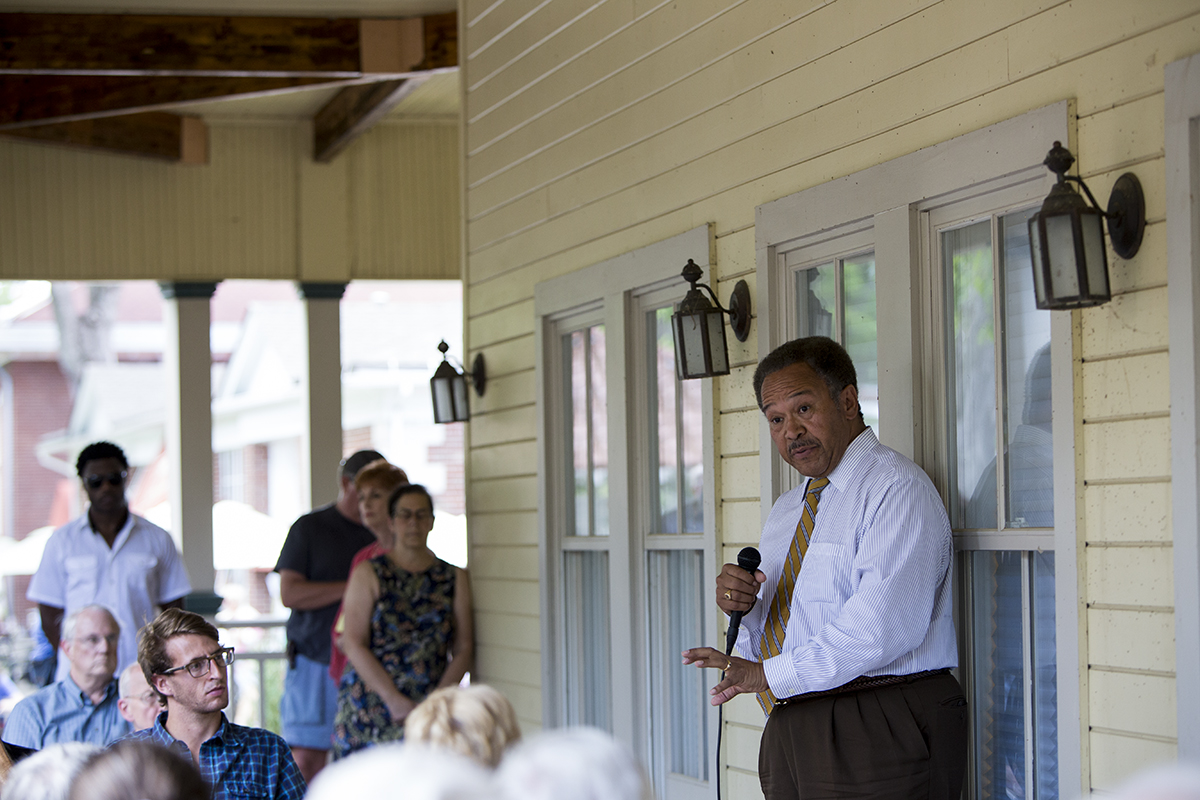 Franklin is the director of the Department of Religion at Chautauqua and presented on “Community & Faith.”

Previously, porch discussions were always held at 9 a.m. on Wednesdays. Trustee Christine Brueschke, who facilitated Thursday’s talk, said the time and day of this summer’s discussion are different, hopefully allowing more community members to be present.

Kicking off the first talk of the season, Franklin said the religion department has about four main areas it’s looking at this year and into the future.

The first concern, Franklin said, is expanding the ethnic, racial and socioeconomic representation at Chautauqua.

“The treasure of Chautauqua, the wonderful experience, the personal growth [needs to] be expanded to new communities and populations that know nothing about Chautauqua,” Franklin said. “That means we have to tell our story. We have to be strategic in extending invitations.”

Franklin and Maureen Rovegno, associate director of religion, agreed that the cost can deter many people from attending Chautauqua, adding that the department is looking into options such as scholarships and endowments to help out those who cannot afford it.

Chautauquan Brian Floriani said Chautauqua might be expensive, but “you get more bang for your buck.”

“I think what we choose to spend our money on in terms of going to Disneyland, or wherever that may be, you’re going to spend a lot more money and be tired, than coming here and being refreshed and in a position and spirit to make things happen in your own community,” Floriani said.

Alex Harris, a first-year Chautauquan, said during the chat that he wanted to see more contemporary worship included, allowing for a more multigenerational experience. After the discussion, Harris said millennials or people with young children can’t afford the experience — the cost or time. He said opening up one or two weekend experiences would allow more generations to enjoy Chautauqua.

Relating to expanding opportunities for diverse groups, Franklin said, the second issue is opening up more denominational houses. He said the inclusion of those houses makes an impact on the community and also allows more people on the grounds.

The board of trustees has approved the creation of the African American Denominational House, which would include representation of nine historically African-American denominations.

“I think the important point is for every educated Chautauquan to recognize that there are these nine denominations founded by African-Americans, scattered around the nation and over 15 million African-Americans are members of those churches,” Franklin said.

The Rev. Sterling Freeman is coordinating the project.

Franklin said the department is also looking to expand leadership through its New Clergy Program and Clergy Leadership Program. The two aim to help and cultivate leaders of religion and thought.

Lastly, Franklin said, he and his team are looking to “read the pulse of the community” when it comes to Sunday worship in the Amphitheater.

Chautauquan Joyce Olson said the service is too lengthy, while Floriani said with its rich history, length wasn’t an issue.

Franklin said he respects the past, but wants to see if there are ways to enhance the experience.

“We’re sort of opening that question to a larger group of Chautauquans to ask, ‘How can we make that a more fulfilling and enriching experience?’ ” Franklin said.

Ed Hann, chair of the board directors for the Ecumenical Community of Chautauqua, asked about the presidential search and if religion will be a factor. Board chairman Jim Pardo said having a deep faith, not specific to one denomination or faith, is needed in the next president of Chautauqua.

The next porch discussion will be held at 12:30 p.m. Friday at the Hultquist Center. Sherra Babcock, vice president and Emily and Richard Smucker Chair for Education, and Matt Ewalt, associate director of education and youth services, will discuss “Family & Youth Experiences and Programs.