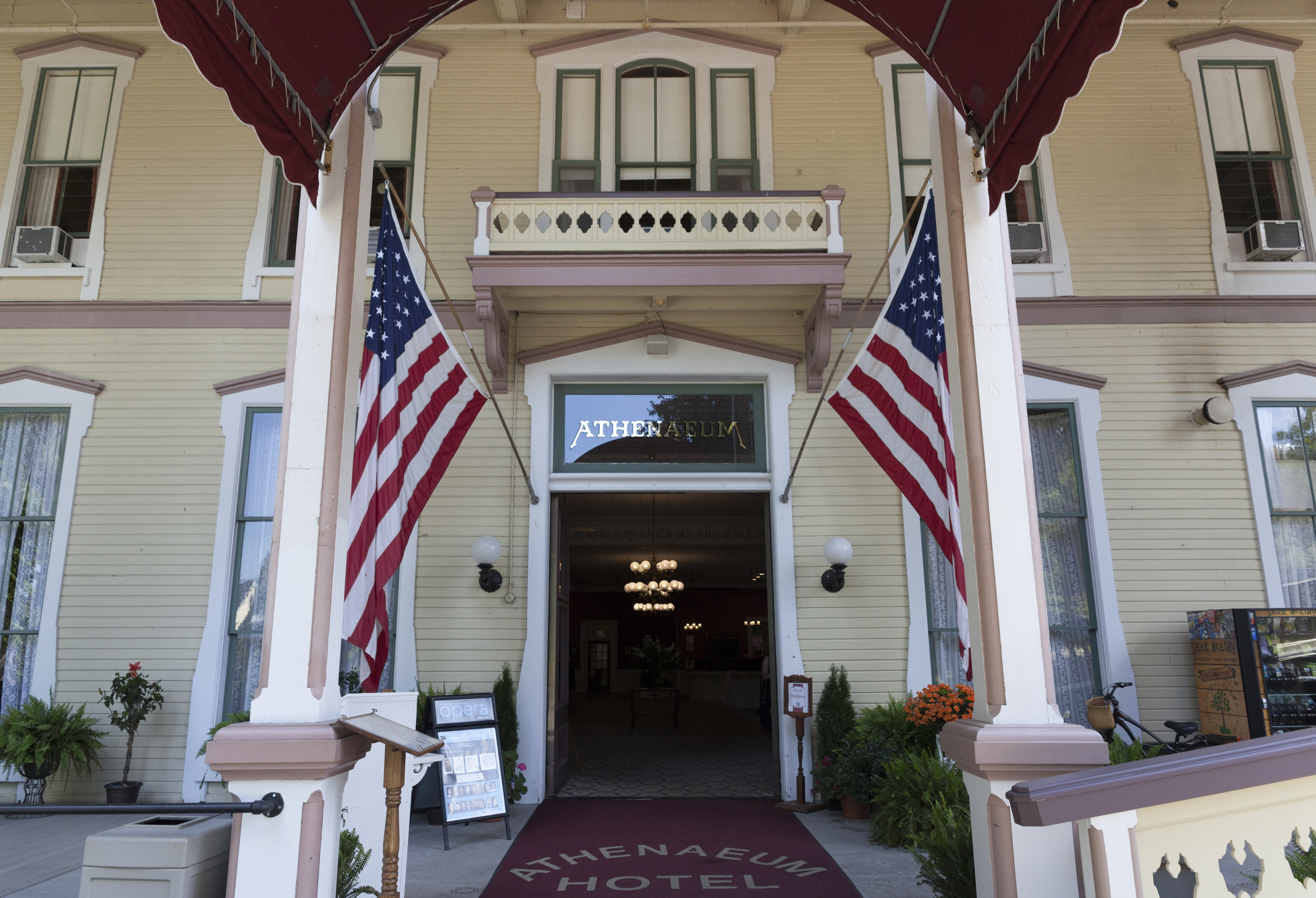 The news from the Athenaeum Hotel is good. Inside and out, the hotel continues to benefit from significant physical renovation. At the same time, occupancy rates have started strongly in 2016 as management explores ways to attract new customers.

Literally in the shadow of the first stage of the Amphitheater renewal project, the hotel has quietly been undergoing a smaller-scale, but not insignificant, upgrade. Although some infrastructure improvements at the hotel are not readily apparent to guests and visitors, others are located right at the hotel’s main entry.

The main structural pillars supporting the porch and roof at the hotel’s main entrance have been rebuilt with solid cores and then tied to deeper, reinforced bases. Also around the main entrance and in connection with the channeling of underground and surface water from the Amp project, an improved subsurface dispersal system should help to keep the entrance dry and the hotel’s expansive lawns nourished. New asphalt paving and sidewalks are also noticeable.

Inside, general manager Bruce Stanton showed off two retrofitted rooms located in the bowels of the hotel. The rooms house an impressive complex of pipes, pumps and valves which were installed in the off-season “primarily for guest safety and comfort,” Stanton said.

“Basically, these pipes are part of a booster system for getting water to sprinklers all over the hotel much faster and more effectively,” he said. “Also, new generator equipment we installed nearby should ensure than we never face a loss of power in the hotel. We appreciate the determination of the Institution’s board of trustees and our own Hotel Corporation board in making sure there was money available for these necessary improvements. This represents a strong commitment to reinvesting in the hotel’s longer-term sustainability.”

Five more hotel rooms were renovated in the off-season, including one that brings to three the hotel’s total of fully handicap-accessible rooms. The room renovation program has been proceeding for several years as hotel management incrementally updates its residential space.

Occupancy rates at the hotel, meanwhile, have started strongly in 2016. After the first two weeks of this year’s summer season, Stanton reported 74 percent occupancy. Looking ahead, he sees very strong bookings for Weeks Five, Six and Nine, and potential to reach last year’s 80 percent figure.

“Forecasting occupancy rates is an imprecise business,” Stanton said. “We budgeted for 78 percent this year. We’re running below that now, but our experience shows that after a season begins, we can add as much as 5 to 7 percent to our occupancy figures. So we have some grounds for optimism on this score.”

Stanton said the hotel’s most recent five-year average occupancy was just slightly below 75 percent; the 80 percent figure achieved last year was the highest since Chautauqua Institution’s 125th anniversary year in 1999, he said.

“It was important that we move away from the American Plan on meals,” he said. “Many hotels comparable to ours had relied on the American Plan for many years. A lot of those have failed. We had to adapt, and we feel that Heirloom Restaurant is also part of what has helped to drive new business. Our expanded buffet has let guests eat at their own pace more than previously. Our figures show that on opening night, 59 percent of our dinner customers opted for the buffet.”

In discussing the hotel’s recent successes, Stanton credited more stable relationships with regional academic culinary programs. Some of those programs, such as Mercyhurst University, Niagara Community College and SUNY Fredonia, have become reliable partners and sources for management talent.

He was also pleased that the Chautauqua Property Owners Association had this year moved its season-opening potluck supper from Hurlbut Church to the hotel’s main dining room. The CPOA event will return to the hotel next year.

The hotel also plans to continue to offer Sandwich, its lunchtime    food truck experience on Bestor Plaza near the fountain on Thursdays.

Stanton was particularly enthusiastic about a new light dinner option offered before the show on the Friday night of the sold-out Avett Brothers concert in the Amp. Four food stations were set up in the hotel parlor, offering Mexican, Asian, barbecue and New England-style items.

“We drew between 300 and 350 guests for that,” Stanton said. “We did well with it. We’re hoping to build on that and offer something similar later in the season, perhaps on the Friday evening of the Huey Lewis and the News concert July 22. In addition to the robust attendance, we were pleased that our crowd was predominantly in the 35–50 age bracket, and that’s certainly a target audience for us.”