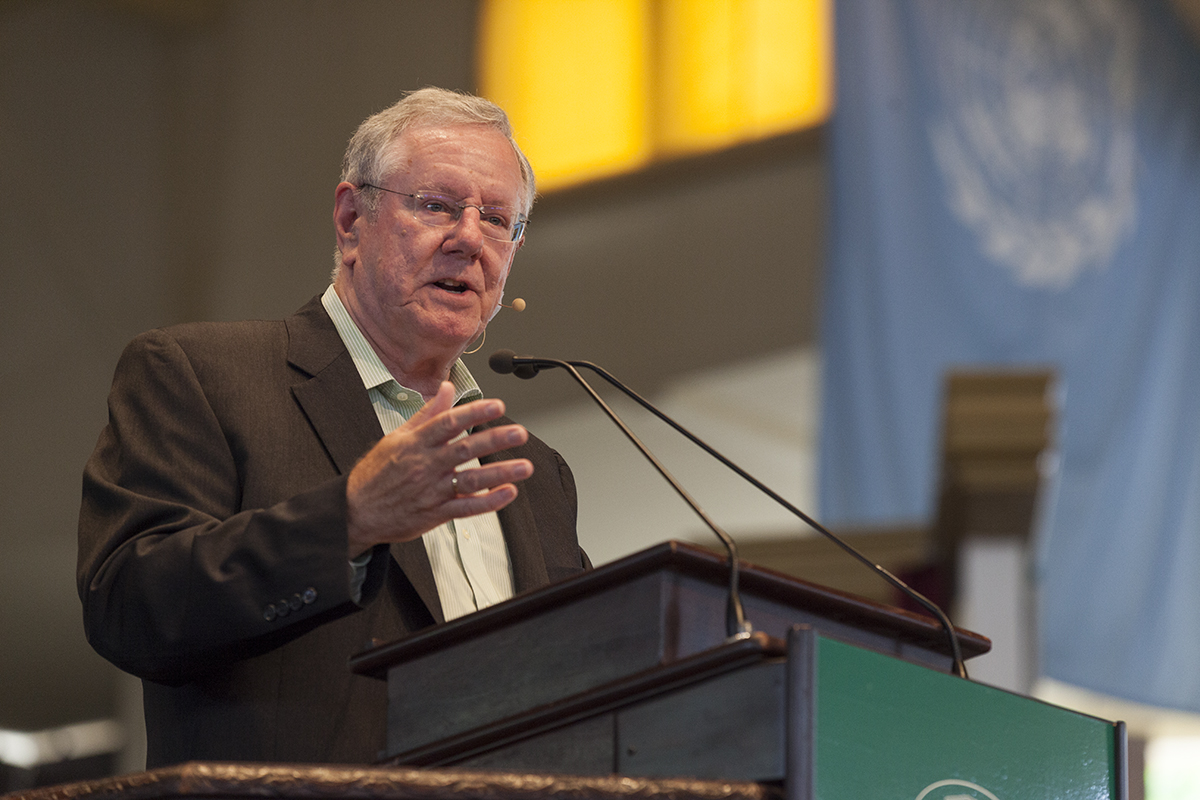 According to Steve Forbes, the United States is not the only nation currently facing an economic and political struggle.

During the 10:45 a.m. Wednesday morning lecture in the Amphitheater, the editor-in-chief of Forbes discussed how these two issues intertwine to stunt national growth, and how to fix those issues to promote economic growth.

“There’s a deep anxiety here and around the world about where we’re at and where we’re going,” Forbes said. “The feeling that we’re not making progress anymore economically — it’s not just unique to this country. There’s an anxiety and worry that leaders around the world [and] those in authority don’t know what to do.”

As an example, Forbes said, Brazil faces a political crisis upon impeaching its president. Japan enters another recession despite having the world’s third largest economy. The European Union faces uncertainty after the United Kingdom made the decision to leave.

Forbes said a stagnant economy often breeds bad politics and poor decision-making among national leaders, citing how the Great Depression in the 1930s led to the Nazi revolution in Germany, which then led to the start of World War II.

Despite the numerous struggles nations have suffered across the globe, many of them were able to recover, and their economies blossomed. Forbes credited that regrowth to advanced knowledge. He believes any nation can come back from disaster as long as knowledge is preserved.

“Yet because knowledge was not destroyed and the U.S. provided a security umbrella, within a few years of that catastrophe [World War II], those countries within western Europe and Japan were exceeding their prewar levels of production,” Forbes said.

Examples of that continue today, Forbes said. Many issues are a result of poor politics that can be solved through knowledge and progression. He used California’s water crisis as an example, comparing it to Israel. Though Israel has desert conditions and rainfall has decreased recently, the country has not faced a water crisis.

The country’s population has grown twelvefold since its founding in 1948, but the net use of water is 10 percent less than what it was when the nation was first born.

“Knowledge, when you allow that to happen, comes from experimentation, trying things, accepting failure, learning from failure,” Forbes said. “You move forward.”

Forbes calls failures that lead to future successes “noble failures,” such as Steve Jobs’ “The Newton” — a proto-Palm Pilot “message pad” — in 1993. Today, Jobs is globally renowned for his Apple products. Forbes said failures need to be seen not as mistakes, but lessons that can grow and lead to success.

To Forbes, that’s what free market is all about: experimenting, progressing and developing new technology and services.

That freedom allows for luxuries to be turned into commonplaces, Forbes said. He quoted Henry Ford’s development of the automobile assembly line, which turned cars from a “toy for the rich into something every working person could afford.”

In order for the U.S. to change the direction of economy, Forbes believes monetary policy needs to be addressed.

“It is absolutely crucial for a good, functioning economy,” Forbes said. “If you don’t get the money right, you’re going to have a troubled economy.”

Part of that policy includes stabilizing the dollar. Forbes compared the value of money to minutes in an hour. He posed the question: What if time was 48 minutes to an hour one day and then 90 minutes the next?

“Money works best when it has a fixed value,” Forbes said. “You know when you go to buy a pound of cheese it’s 16 ounces. It doesn’t fluctuate each day. When it has an unfixed value you get trouble in the economy.”

His idea of stabilizing the value of the dollar dates back more than 200 years in the United States: the gold standard.

U.S. currency was based on the gold standard for 180 years, getting the nation through the Civil War, the Great Depression and two world wars.

President Richard Nixon abandoned the gold standard in 1971. Forbes said if the U.S. would have continued backing the dollar with gold, the nation’s economy would be $8 trillion bigger than it is today.

Forbes said gold should back the dollar because of its availability, indestructibility and accessibility. Gold is rare, but not too rare like platinum. Fairly easy to mine, gold cannot be destroyed, only molded into different forms. The amount of gold found hundreds of years ago still exists today and discoveries continue to increase steadily by 1 or 2 percent each year.

Forbes also touched on taxes and how corrupt the federal income tax code has become. Forbes said no one in the world knows what all the income tax code entails — all told, the code is more than 10 million words long.

Forbes believes it makes the nation’s economy counterproductive as citizens become overtaxed. There are taxes when you turn on your water and your lights, he said. There’s sales tax on the cup of coffee you drink in the morning. There’s a gasoline tax on the fuel you use to get to work.

“It’s beyond repair,” Forbes said. “I think if we want to solve the problem, what we have to do is what 35 other countries around the world have done and that is take this piece of complex corruption, just throw the whole thing out and start all over again. Make it clean.”

If he were to make a new income tax code, Forbes said he would include a single tax rate. He cited statistics that estimated U.S. citizens spend 6 billion hours a year filling out and filing tax forms and more than $200 billion complying with the income tax code.

“Imagine if all of that had been used for new products, new services, new medical devices [or] new cures for diseases, how much all of us would be better off today,” Forbes said. “Where should our time and brainpower be applied — to something stupid and corrupting like this or to something that benefits all of us?”