Steve Forbes will be the first to admit it. 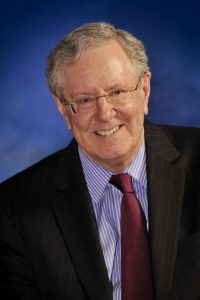 “Monetary policy is not the most exciting subject in the world,” he said. “But it is right now probably the most critical economic topic. If you don’t get the money right, the economy is going to be in trouble.”

Forbes, the editor-in-chief of Forbes magazine and a two-time candidate for the Republican Party nomination for president, has built his career on helping Americans understand the intricacies of economic policy. He will touch on those topics and a number of issues central to the presidential election during the morning lecture at 10:45 a.m. Wednesday in the Amphitheater.

In his 2015 book, Reviving America: How Repealing Obamacare, Replacing the Tax Code and Reforming The Fed will Restore Hope and Prosperity, Forbes outlines a plan for helping jumpstart the United States economy.

This morning, he will have the opportunity to discuss events that have occurred since the release of his book, such as last month’s controversial Brexit vote.

Despite his criticism of Europe’s economic policy, Forbes said he does not believe Britain’s decision to leave the EU was a smart move. In a recent column that ran in his magazine, Forbes called the Brexit vote “a disaster, politically and economically.”

But even in the aftermath of such a troubling development, Forbes said, there are steps Britain can take in order to secure a prosperous economic future.

“After they get a new prime minister, they should try and negotiate an agreement where they will be no longer tethered to bureaucratic regulations from the European commision in Brussels … but preserve free market access,” Forbes said. “They should also seek, depending on who are next president is, to have Britain become part of NAFTA.”

The presidential election is another topic that has dominated the national conversation this summer, and one on which Forbes can offer a unique perspective.

He ran two unsuccessful campaigns for the nomination of the Republican Party for president, winning the Arizona and Delaware primaries in 1996. That same year, Forbes hosted “Saturday Night Live,” and he was the last presidential candidate to do so until Donald Trump took the stage last November.

“The cast wanted you to succeed, because that helped the show. So you didn’t have any animosity,” he said. “We have five daughters and all of them were in one sketch or another. You wouldn’t recognize them because they had wigs and disguises, but they all got a taste of the bright lights.”

Forbes said he intends to serve only as an “agitator” during this year’s election, in which he said both candidates’ stances on free trade will shape the future of the United States economy.

“We have remedies in hand to deal with the trade abuses and we’ve had them on the books for years. This administration has been reluctant to use them, but the tools are there,” Forbes said. “Donald Trump is saying that he wants to destroy NAFTA, which I think is very counterproductive and would do far more harm than good. But Hillary Clinton has shown that she has the backbone of an eclair.”

He also questioned the effect that Libertarian presidential candidate Gary Johnson could have on the general election, should he cross the 15 percent polling threshold required to participate in presidential debates. Johnson is a proponent of free trade and could force Clinton and Trump to articulate their stances on the issue at future debates.

Although Forbes has not shied away from criticizing his party’s presidential nominee, he said that Trump is beginning to organize his campaign ahead of the general election in November. But Forbes said Trump should do more than just accuse Clinton of being crooked if he wants to gain the trust of voters who may have doubts about him.

“If he gives them an opportunity, [they can] say, ‘Well, we know what [Clinton] is like. We’ve known her for 20 years. Maybe, we can take a chance on Donald Trump.’ And so, when you vote, whether you’re 1 percent enthusiastic or 100 percent enthusiastic, it doesn’t matter,” Forbes said. “The vote counts the same.”

Forbes also said Trump has an advantage in the race for the White House, because he resonates with voters who don’t like the direction the country is headed.

Forbes said he expects that to become apparent when Americans head to the polls in November.

“If you look at surveys of people who think the United States is on the right or wrong track, wrong track overwhelms right track, and that’s what Trump has to tap into,” Forbes said. “Despite all that’s gone on, it’s for Trump