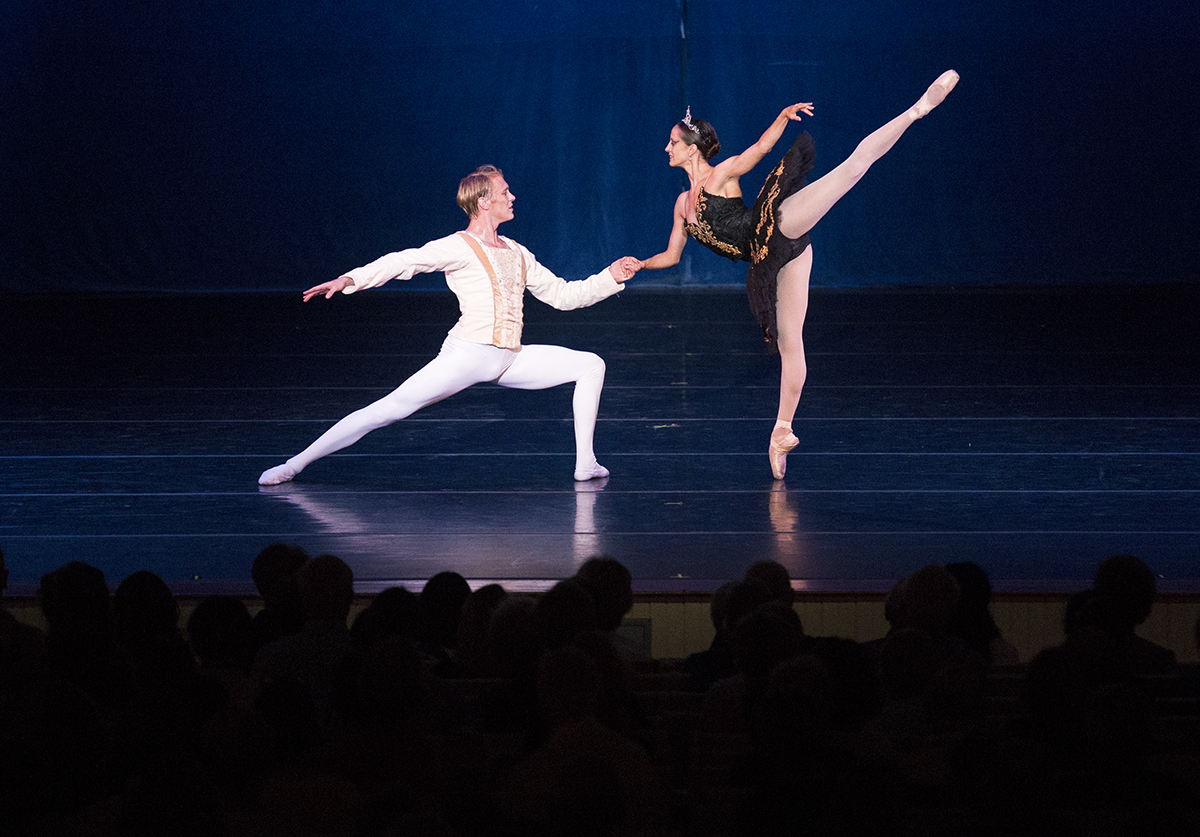 The Charlotte Ballet has every right to be the most smoochy dance company in the country, and Sarah Hayes Harkins and James Kopecky in an excerpt from, of all things, “Romeo and Juliet”  are contenders for the longest kiss on stage, thanks to choreographer Jean-Pierre Bonnefoux.  Bonnefoux presents his pas de deux dancers bussing in a rotating 360 degrees and a bit more for a good full minute. Count it out. Did he make his point? Not a bad exit line. What better way to put a wrap on a piece? Particularly one with roots in 1940, scored (still) by Sergei Prokofiev.

This is a fine company, of international regard. And the good news is that behind the pre-eminence of prima ballerinas Hayes Harkins in “Romeo” and Alessandra Ball James in the “Black Swan Pas de Deux” are 11 stage-ready, really fine performers and a leadership team that has thought through how to use them, presenting to strength, closing in on the character they bring to the stage.

Not that I have anything against busses on the cheek all around, and blown kisses to audience and down the line of the finale bow. And we’ve got to acknowledge that such team collegiality and the consequence of team support is remarkable, especially in our time. … If only politics could be managed with kisses instead of insults.

Charlotte Ballet is led in its eight-week residency at Chautauqua by the retired and legendary danseur noble for the New York City Ballet, Bonnefoux and his wife, renown prima ballerina for the George Balanchine New York City Ballet Patricia McBride. This was the night for the pas de deux, a venerable dance form from the 18th century which has left an imprint on a dance for two ever since. The dance trope watches times change, for in addition to a staging for a fine ballerina, supported by her male partner, narrative drama — outright storytelling — is far more prevalent now.

Wednesday’s pas de deux evening was necessary programming, following on Ball James and Josh Hall’s performance of the “White Swan” excerpt from the 19th century “Swan Lake,” first performed in 1877 with score by Tchaikovsky and in 1895 rechoreographed famously by Marius Petipa. Tuesday evening Ball James and Hall performed the White Swan pas de deux to huge applause, which in turn was outdone by a quick full audience sustained appreciation the next night for Ball James and Kopecky, rightly fitted as the closing piece, with the distaff “Black Swan,” subtly replacing grace with threat through the shape of her hands to the lean her torso.

Earlier Ball James and Hall closed the first half with Associate Artistic Director Sasha James in Lascia la Spina, Cogli la Rosa, which with my primitive Italian suggests “leave inhibitions behind, seize the rose.” The work is enormously expressive, roaming through body types and combinations, fit for collaboration with Charles Darwin. The couples’ twining and sudden (and impossible) transformations enthrall, formally steadied by music from George Frideric Handel.

The range of offerings, usually under 10 minutes long, extend from the “Peasant Pas” from “Giselle” in 1841, holding to the original choreography by Jean Coralli and Jules Perrot. It is a star-crossed love danced with cool classicism, turning a touch more toward the gift of romance.  It was performed by Elizabeth Truell and Peter Mazurowski, one often the echo of the other, which is to the point, moving the couple fluidly through time and their space.

Full shift into another gear, the hyperventilated  emotion of Mark Diamond’s choreography presents another view of “Spartacus,” the escaped slave gladiator who, legend has it, led a revolt against the Roman Empire. But rather than heroic fighter, Diamond’s “Spartacus,” limned by Iago Bresciani, is alive and thoroughly charged for the touch of Chelsea Dumas. Their trysts, lifts and twining, on and off the floor, is a sexy give-and-take until Bresciani, in the ultimate act of ownership, carries a sassy Dumas off the stage. Diamond, who often choreographs for the company, also serves as its second company program director.

Diamond’s and Janes’ choreography is second gear, with excerpts from “Giselle,” “Romeo and Juliet” and “Swan Lake” in super modified up to date first gear, sort of a stick shift for a sports car.

Third gear then is a socially raw dance for two about abuse of all sorts, using alcohol, violence against women, against one’s self and then returning for more. It is called “Dirty Truth and Pretty Lies” and it is boldly odd to portray so finely such an ugly and raw situation. Raven Barkley and Ben Ingel are superior, a mastery of dramatic pose against dancerly movement. “Dirty Truth” is by Dwight Rhoden with music by Dimitri Tiomkin and Ned Washington, a commission for the Charlotte Ballet

Another fine piece, also in third gear, choreographed by Janes, features Hayes Harkins and Hall, called “Hallelujah,” using the great song by Jeff Buckley, to wonder about the tenor of life today. It is a part of a longer work, “Sketches by Grace,” by Janes. All sorts of goings on, it turns out, are deeply moving. Yes, a good bit more smooching, but tough stuff, too, and tough to do. There’s more to Hall than fine lifts and turning control. He leaps with spectacle and carries Hayes Harkins on, as one would with another in trouble. The work is quietly reflective of the extremes of our time, when private love must survive an environment marked now with public hate.

The evening nicely includes the classical breakout opportunity for solo work by the partners before a finale return. And it also broke the rules a bit with a solo by Ryo Suzuki choreographed by Rostislav Zakharov, a Russian choreographer and educator who died in 1984. This small piece is for a male soloist, called “Gopak,” likely a variation on the Ukrainian “Hopak,” which is the traditional Ukrainian nationalistic dance of the Cossacks.

Point is, though, Suzuki was filled with the vitality of successive athletic leaps and the iconic floor kicks, and he focused the audience as the first work of the evening, set for break-through, break-out and fun. Later, Sarah Lapointe went solo for a splendid Mazurka, choreographed by Maestro Bonnefoux.

Anthony Bannon was the dance critic for The Buffalo News, studying with Selma Jean Cohen of Dance Perspectives and Doris Hering, editor of Dance magazine. He now is the director at The Burchfield Penney Art Center at SUNY Buffalo State.