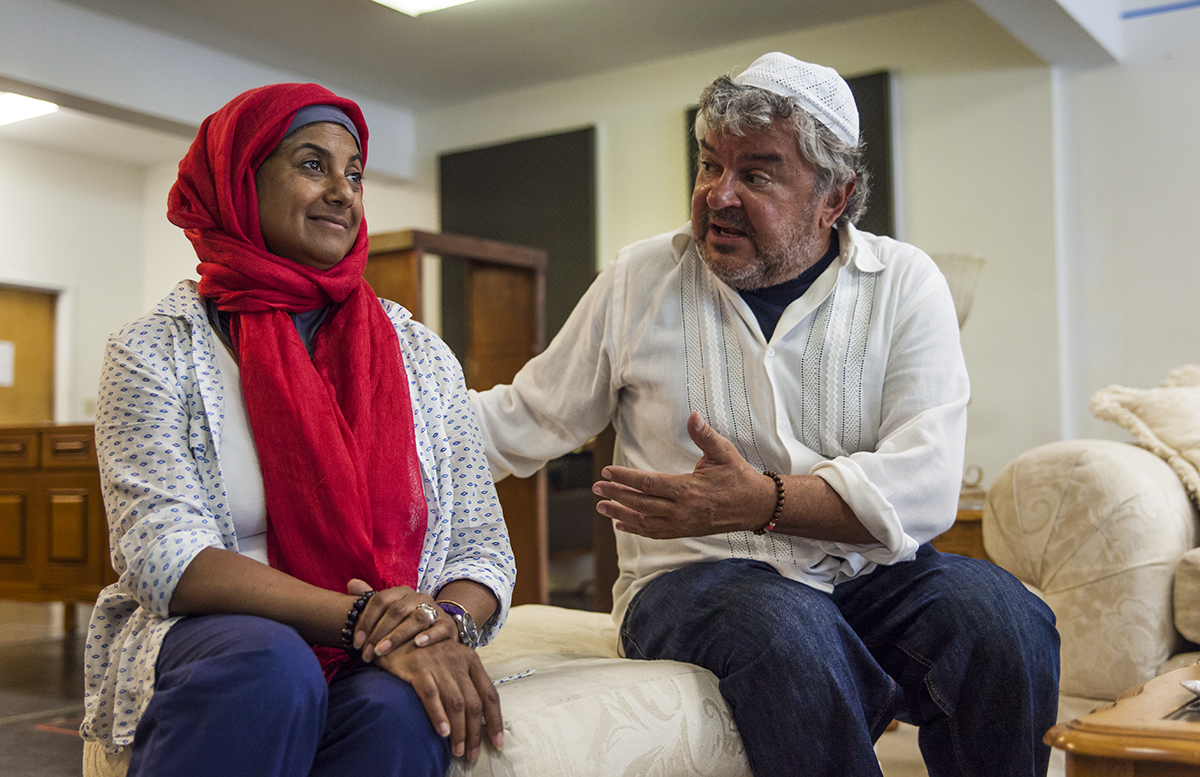 Zayd Dohrn looks for how the personal connects to the political.

Dohrn is the writer of The Profane, the second Chautauqua Theater Company mainstage production of the season, which opens with a preview showing at 8 p.m. Friday in Bratton Theater.

Finding that connection is how he approaches playwriting, and it’s that juxtaposition that can be found at the heart of his new show.

The Profane tells the story of a father, Raif Almedin, whose prejudice flares up when his daughter, Emina, brings home a man from a devout Muslim family. The show, which was commissioned by CTC and the Chautauqua Writers’ Center, will be seen for the first time by audiences this weekend and is Dohrn’s third at Chautauqua.

CTC previously presented staged readings of Dohrn’ shows Sick and Muckrakers as part of its New Play Workshop series, which kicked off its 11th year last week with Chelsea Marcantel’s Tiny Houses and continues on Aug. 3 with Nick Gandiello’s The Glow Overhead.

Dohrn had an unusual childhood, moving around with his parents, Bernardine Dohrn and Bill Ayers, who were political activists living under pseudonyms to hide from the FBI. After graduate school, he landed in New York, where he worked as a playwright.

He now teaches playwriting at Northwestern University in Evanston, Illinois. He began working on The Profane a year and a half ago.

Dohrn started thinking about the idea for the show after the January 2015 shooting at Charlie Hebdo in Paris.

“It’s an ongoing crisis in our culture, this question of religious fundamentalism and liberalism and whether they can coexist or whether they’re [incompatible],” he said. “I think more specifically in America right now we really have a crisis around questions of tolerance and around immigration.”

He said The Profane explores how big political questions manifest on the intimate, familial level.

Although some writers might see themselves in one of their characters, Dohrn sees himself in all of them. For example, he shares writing and humanism with Raif, and a way of seeing the world with Emina.

“Throughout this play, the mirrors of what we assume freedom is and what we assume fundamentalism and conservatism is are constantly being played with,” CTC Co-Artistic Director Vivienne Benesch said to her colleagues at a Profane meet and greet.

Dohrn hopes the show will shake some people’s certainty over right and wrong.

“I think what the play tries to do is say, ‘Yes, of course liberalism, of course tolerance, of course openness to other ideas,’ but when that system of thought is confronted with a different system, well, sometimes free speech can look like sacrilege,” he said. “How can we take that and understand it in terms of our own world view?”

Dohrn said the play is invested in questions of American and religious identity. He hopes the show will make audiences question the path forward.

“I think the play is, in many ways, just a play about tolerance and a play about how we can tolerate each other both across religious beliefs [and] across national boundaries,” he said.