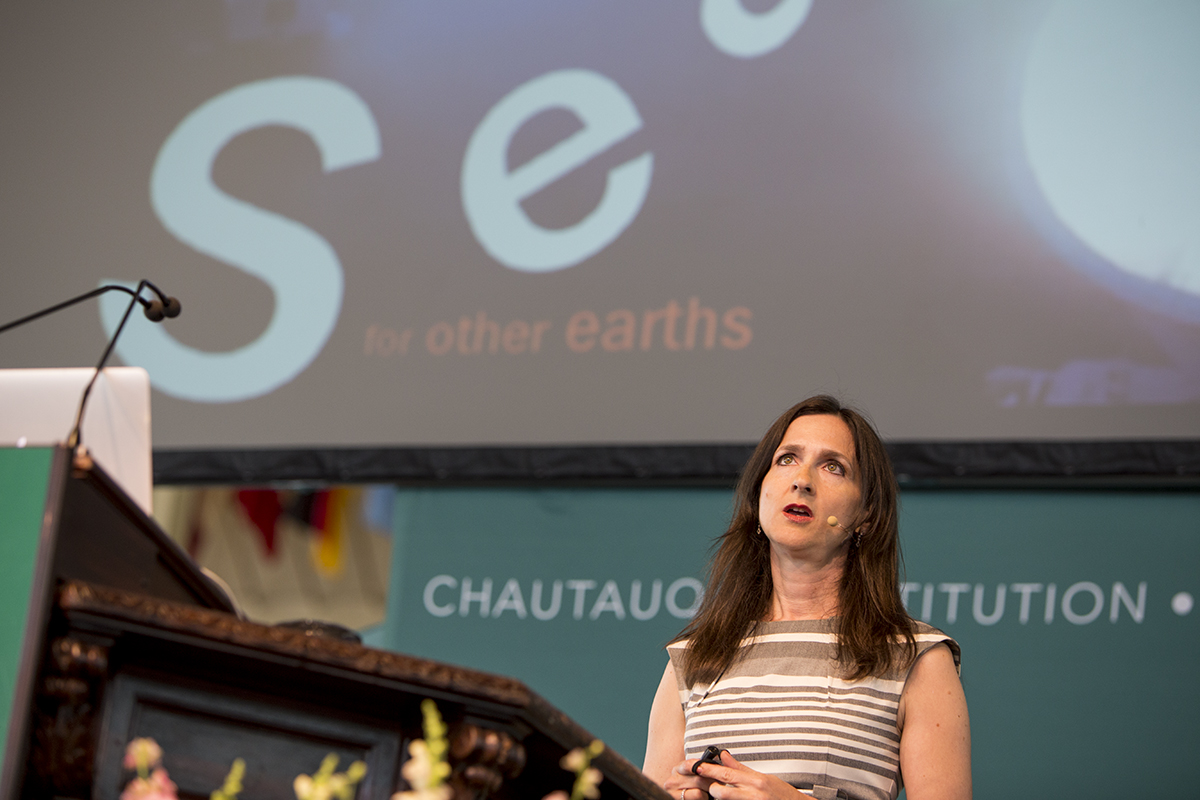 When Sara Seager looks at the night sky, she doesn’t just see the stars. She envisions the planets and solar systems these stars hold and the possibility of finding another earth.

Seager, the Class of 1941 Professor of Planetary Science and Physics at Massachusetts Institute of Technology, continued the topic of “Our Search for Another Earth” by discussing exoplanets during the 10:45 a.m. Wednesday morning lecture in the Amphitheater.

“Every star is a sun,” Seager said. “If our sun has planets, … surely those other stars should have planets also, and they do. We call them exoplanets.”

Seager introduced the audience to NASA’s software program Eyes on Exoplanets, which displays a fully rendered universe. Through that program, anyone can look at the different stars with known planetary systems.

In 2009, the Kepler Spacecraft launched with the sole purpose of discovering new planets. Seager used Kepler-186f, a star found by the spacecraft, as an example: With Eyes on Exoplanets, she was able to determine which planets in the system were in the “Goldilocks Zone.” A planet in that zone means it is “not too hot, not too cold, but just right for life.”

The Kepler Spacecraft allows astronomers to find planets similar in size and mass to Earth and within an orbit that could have similar temperatures. However, Seager said, current technology limits astronomers’ ability to find a twin Earth that has the ability to host life.

“Planets come in all sizes, all orbits, anything we can imagine happens in exoplanets,” Seager said. “As I always like to say, anything is possible in exoplanets … within the laws of physics and chemistry.”

Seager said no two solar systems are alike — though there are thousands of known planets orbiting other suns. Those systems are formed by a random process.

“Like rolling the dice, each planetary system forms differently,” Seager said. “When we think about finding an earth, a planet just like ours, it’s incredibly challenging.”

With Earth’s close proximity to the sun, Seager said it is difficult to locate the planet from space. The brightness of the Sun hides the Earth, which is an issue astronomers have come across when looking for a similar planet.

The sun is 10 billion times brighter than the Earth. Seager compared that to searching for a firefly next to a searchlight from a far distance.

Seager said a planet can be found more easily when it partially blocks some of the light the sun is emitting.

Astronomers measure the brightness of a star during a period of time and look for a drop in brightness, which will occur when a planet crosses in front of the star. Seager said that technique is called the “transit light curve.”

Astronomers at MIT, along with Seager, are developing a new space telescope with NASA called the Transiting Exoplanet Survey Satellite. The satellite will perform an all-sky survey using the “transit light curve” to find new planets.

Unlike Kepler, TESS should allow astronomers to survey an array of smaller planets using four wide-field cameras. The spacecraft is set to launch in December 2017, Seager said.

Throughout Seager’s 20 years of studying exoplanets and looking for another Earth, she has been asked if there is a possibility of humans traveling to this new planet. Seager believes that shows people are natural-born explorers.

“We want to go to another world,” Seager said. “We want to see what’s there, and at least have some hope that we can experience it ourselves.”

However, technology doesn’t currently allow humans to travel the vast distance between Earth and a star in another solar system.

“Space is vast, and there’s a lot going on in space,” Seager said. “I’d say it’s a bit unfortunate that the nearest stars are so far away. Because what it means is that it’s just incredibly difficult to imagine us as humans travelling to another star.”

Our neighbor star system, Alpha Centauri, is 4.3 light-years away from Earth. Voyager 1, launched in the 1970s, travels at about 17 kilometers per second. Seager said it would take Voyager 1 70,000 years at its current speed to reach Alpha Centauri.

Though it is impossible for humans to travel to those stars, many astronomers are thinking of ways to send small spacecrafts through space to reach those other solar systems.

Seager said a group of scientists, physicists and engineers sponsored by billionaire Yuri Milner have mapped out the largest challenges and proposed a nanocraft about the size of a postage stamp called a “starchip.”

The idea was proposed in April. If the project ever comes to fruition, the nanocraft would take a little more than two decades to reach Alpha Centauri, a distance of about 25 trillion miles.

“It is laughable, but you have to understand it’s the first time someone actually wrote down everything you’ll need to do and all the challenges,” Seager said.

Though some wonder why Seager bothers looking for a habitable planet if it is impossible to travel there, she said it is her lifelong goal to find another earth and some form of life on another planet. Seager said that life-form doesn’t necessarily need to be intelligent life, but could even be a single-cell bacteria.

Seager said all life-forms use chemistry to extract or to accumulate and store energy. To sense that change in chemistry, astronomers use the Hubble Space Telescope to study atmospheres with a technique called “remote sensing.”

Astronomers look at light, specifically at the parts of the light that are missing. Those missing sections have been absorbed by gases with each missing line representing a different gas. Seager said that technique is a major tool for astronomers to find gases emitted from possible lifeforms.

“There’s so much information contained in the spectrum, unbelievable amounts,” Seager said. “It’s because all atoms and molecules absorb light at different wavelengths.”

To aliens, if they exist, Seager said, Earth and Venus would look the same, as they have a similar mass and size. However, the two planets are vastly different. Without the tool of remote sensing, there would be no way to tell Earth contains life while Venus does not.

“It’s just amazing, to me, that to the rest of the universe, to the other planets or the other stars if the beings have a way to look at us, to them the Earth is just another exoplanet,” Seager said.