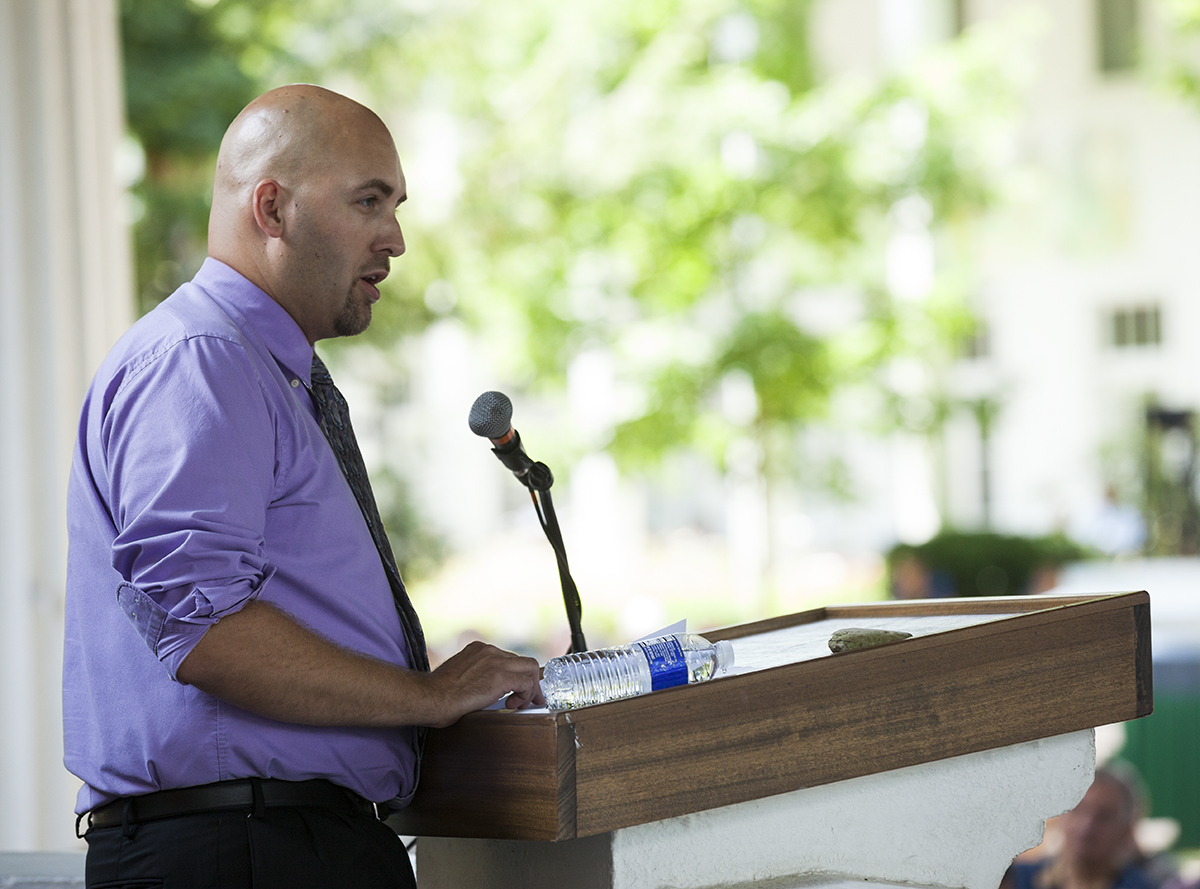 The biggest thing standing between the United States and an expanded space exploration program is anywhere from 60 million to 100 million born-again Christians.

That was political scientist and Red Letter Christian Joshua Ambrosius’ conclusion after he polled thousands of Americans on their religiosity and opinions on space exploration, finding that Evangelicals, between 90 million and 100 million Americans depending on the estimate, stood out among all faiths in opposition to almost all aspects of cosmic conquering.

Speaking at the Hall of Philosophy Tuesday afternoon, Ambrosius shared his findings. Drawing from personal attacks he received from creationists, he offered theories on why evangelicals may oppose space travel and a spirited defense of the pursuit.

Ambrosius was drawn to the question of how religion affects views on space after realizing the study of the stars and space exploration is an intensely spiritual experience, he said, forcing man to confront his own limitations and the impossibly vast beauty of creation. He cited astronomer and writer Carl Sagan, who said pondering the heavens forces religious thought, and asked people to simply look at the most recent photos NASA took of the Orion Nebula.

“Pondering the grand scope of creation fills me with an awe that I cannot help but call worship,” Ambrosius said. “Space exploration is worship, or at the very least an activity which preludes and inspires worship.”

In a paper published in Space Policy in 2015, Ambrosius asked about 7,000 Americans about their religion and opinions on space exploration, everything from knowledge of planets and belief in the Second Coming to church attendance and if they think U.S. should be first in space exploration (dubbed “space nationalism”).

Whereas every religion tested, from mainline Protestantism to Buddhism, expressed support for space exploration, Ambrosius said evangelicals were ardently opposed. They scored significantly lower on five of the seven cosmic variables tested. Ambrosius was particularly surprised when he looked at the at the questions about whether humans will land on an asteroid, discover extraterrestrial life, make advances in space flight with space tourism, and set foot on Mars.

“Evangelicals express a sort of space pessimism,” Ambrosius said. “Evangelicals are more sure Jesus will return to the earth in the next four decades than the rest of the population [and less sure] of any of those four space events occuring.”

That raises the question: What’s so special about evangelicals? Ambrosius believes the answer may rest with a man named Ken Ham and inside of the 43,350-square-foot Ark sitting in the middle Williamstown, Kentucky.

Ham is CEO, founder and president of Answers in Genesis-U.S., the organization behind the Creation Museum and Ark Encounter, a life-size recreation of Noah’s Ark equipped with replicas of every animal Ham says was in the ark, including dinosaurs.

Ambrosius argued endeavors such as those lead Christians to be skeptical of science and, in turn, oppose space travel. (Ambrosius was also criticized by Ham after he published his study.)

But Ambrosius has a solution. He found that people who say they have pro-science pastors were more amenable to space explorations by staggering measures. If they reported a pro-science pastor, their likelihood of saying the practice did more good than harm more than doubled from 47 percent to 96 percent.

Ambrosius called for people to make greater scientific outreach to evangelical communities. This can’t come from traditional emissaries of science such as Bill Nye or Neil deGrasse Tyson, who have been antagonistic to evangelicals, Ambrosius said.

“Efforts to recruit evangelicals to the space cause are going to be imperative if we are going to go further into outer space,” Ambrosius said.

Finally, Ambrosius turned to the question of whether the U.S. should have invested millions in space travel given all their problems at home — a topic also brought up by presidential hopefuls Donald Trump and Bernie Sanders. Ambrosius noted the extensive technologies that have come out of space research, the spiritual testimonies of former astronauts and the possibility that man will one day need to colonize other planets to survive.

“Reasonable people will and should disagree about what we do as a society,” Ambrosius said. “But I never want to see religion, especially my own, be a stumbling block to progress in this area and others.”