Are You a Couch Potato? Blame Evolution, Says Nina Jablonski 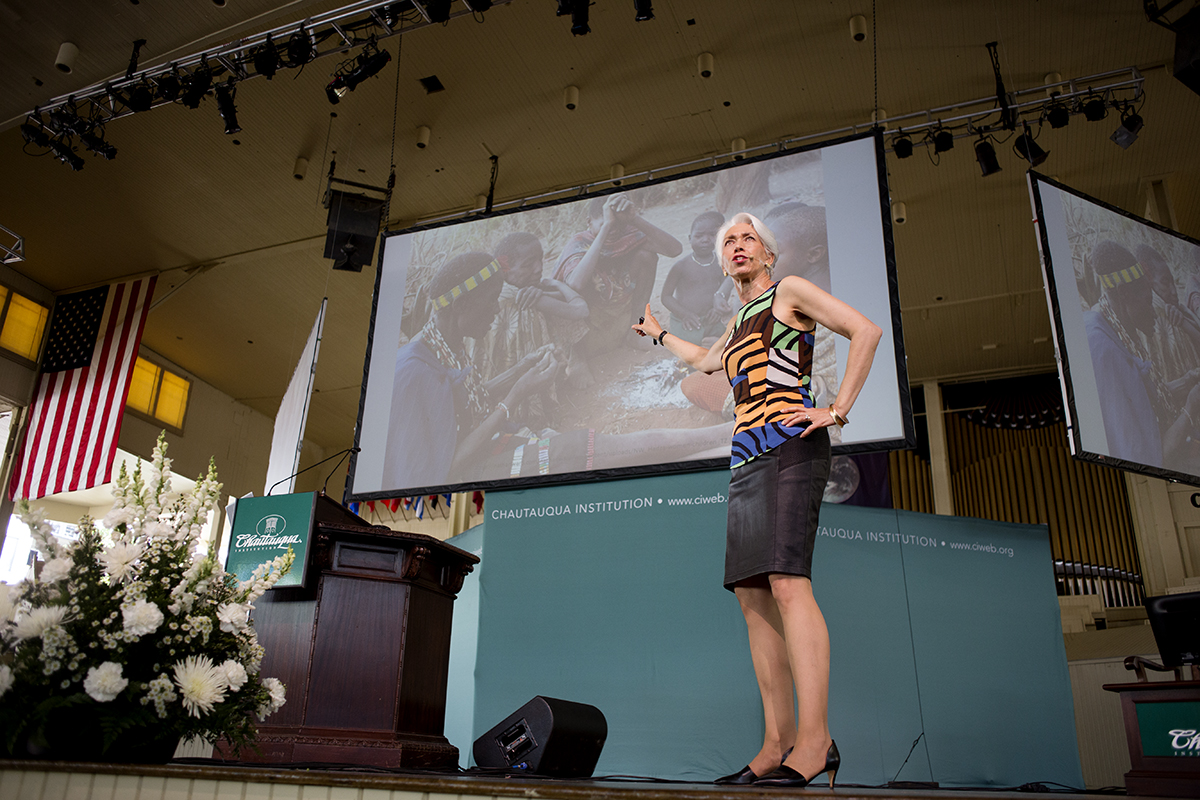 From last Friday to Aug. 21, people around the globe will watch as the world’s best athletes compete for the gold. Those athletes are seen as extraordinary and strong as they engage in exerting physical activity.

According to biological anthropologist Nina Jablonski, every individual had the body of an Olympian more than 2 million years ago. Jablonski spoke about the evolution of humanity from primates to the present during the 10:45 a.m. Monday morning lecture in the Amphitheater.

In her lecture, titled “Extreme Bodies: Humanity’s Journey from Savanna to Sofa and Beyond,” Jablonski said new inventions and technologies have led to the deterioration of humanity from the roots of their ancestors.

“In our modern life, we’re pushing our bodies to the limit,” Jablonski said. “We are — through sedentary lifestyles that are such a departure from where we were even in the relatively recent evolutionary pasts.”

The ancestors of human beings, were part of the 2-million-year-old genus Homo and lived a highly active life. Those ancient people had to run to catch their food or run away from predators.

“It really was essential,” Jablonski said. “It was essential for living, reproduction and survival for us to be highly athletic.”

Jablonski said the human body was built to endure physical activity with long thighs, strong butts and the ability to sweat. Sweat glands allow the body to cool itself, which equips humans to run or travel long distances on foot.

“Don’t … get anxious about your sweat,” Jablonski said. “Enjoy it, because sweating was a signal feature and probably one of the most important features that ultimately allowed the expansion of the human brain in the lineage of the genus Homo.”

An Olduvai Gorge hand ax, dating back a million years, illustrates the intelligence of members of the genus Homo during primitive times. Those tools were considered complex and allowed those ancient peoples to hunt more efficiently.

“We don’t think a lot about the intelligence of our ancestors,” Jablonski said. “We often depict our ancient ancestors as little better than oafs who sort of struggled along until the 21st century.”

Jablonski said those tools are indicative of the great thought processes of the early genus Homo lineage. A tool such as the hand ax would take “mind work and planning” to create.

“We had it together,” Jablonski said. “We had it seriously together 2 million years ago, to be able to make tools that were that complex that we could use repeatedly. We know that tools were not only manufactured, [but] they were reused by people.”

Those hand axes evolved into spears the ancient humans could thrust at prey. Spearheads have been discovered in South Africa dating back 500,000 years. Jablonski said those thrusting spears were an “amazing watershed in human evolution,” because they gave individuals the ability to hunt actively rather than looking for weak or already dead animals to feed on.

When the last glacial period ended about 15,000 years ago, the world became more humid. As a result, humans began to experiment with agriculture. The beginning of agriculture began with the domestication of grasses 10,000 years ago.

Jablonski said the beginning of agriculture ultimately led to the sedentary lifestyle humans live today. Instead of going out and hunting and gathering food, it was available just outside their door.

That, along with the creation of pottery that allowed people to store food and the domestication of animals, led to people forming settlements. Because people no longer needed to travel to follow food, they were able to build permanent housing.

“Fixed settlements are another part of this big change that we begin to undergo 10,000 years ago,” Jablonski said. “We’re moving around physically less. We have food that is on our doorstep more or less that we can store.”

“I don’t want to say that we, 10,000 years ago, became couch potatoes,” Jablonski said, “but we were certainly well on the way.”

Jablonski said prolonged sitting is extremely unhealthy for the human body. Chairs were designed to support the muscles and limbs in a way that made moving unnecessary, and Jablonski said many people consider comfortable chairs to be one of the most wonderful things about their homes.

“You get the message,” Jablonski said. “When you are sitting and not very mobile, eating hyperpalatable foods, this is a departure from our history.”

Jablonski said this way of life is a vast change from the way members of genus Homo lived and how Homo sapiens lived 20,000 years ago. It was a quick change, too, as 20,000 years is a tiny portion of the 7 million years of human evolution.

“We, in the last few hundred years, have basically evolved increasingly sedentary lifestyles, which means we have done something suddenly to change tremendously our physiology,” Jablonski said. “We did not evolve to have our butts seated in chairs all day. I’m not here wagging any kind of admonishing fingers, but simply to point out that this is something that our bodies are not well suited to, and we have to be cognizant of that.”

Jablonski said the athletes competing in the Olympics are doing it for sport. Being physically active is something people opt into today. It’s no longer survival, but something to do for fun.

“We don’t have to actually reach to Olympic heights of exertion, but [we need to] recognize that we did evolve to be highly physically active,” Jablonski said. “Regardless of what you do, do it. Twitch your butt in a seat. Walk a little bit, and enjoy it. Exalt in your evolutionary heritage because ultimately, you can look at yourself in the mirror and say, ‘Yes, 2 million years ago, I was an Olympian.’ ”

BTG Brown Bag to Argue Plants Are Cool, Too