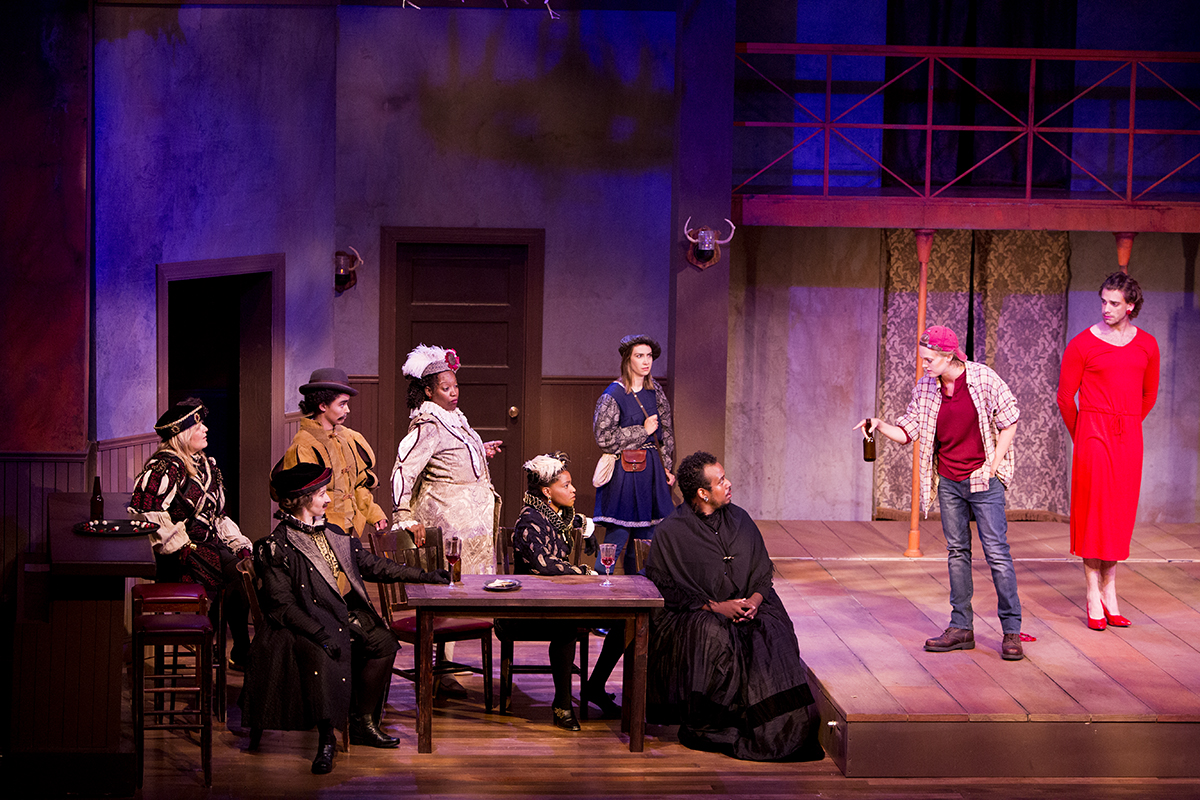 There’s no green room backstage at Bratton Theater. Or rather, there is a green room, but it’s just a hallway with some shelving that also doubles as the stage management office and coffee station.

Along the hall are three dressing rooms and two restrooms. One restroom is shared with wardrobe; one is shared with props and paints and has a fridge in it. Multipurposing is at its best in a small space like that.

Around the corner is a crossover space behind the stage where crew and cast can move without being seen by the audience of The Taming of the Shrew, Chautauqua Theater Company’s final show of the season, which continues at 4 p.m. Thursday and closes at 4 p.m. Friday.

There are three prop tables backstage, plus an overflow box and an overflow shelf for the extra props, because, as assistant stage manager Nellie Petlick said, the show has a lot of props. There are logical ones —  swords and old-fashioned musical instruments -— and more confusing ones, such as a textbook titled Essentials for Health and Wellness.

A blonde-wigged mannequin stands in the crossover, wearing camouflaged shorts and a tight T-shirt that reads, “Biggest Rack in Town,” which only makes sense if you’ve seen the show.

It’s Sunday, and Shrew starts for the night at 8 p.m. At 6:30 p.m., that small backstage area is already alive with a crew ready to prep the space.

Petlick, one of two assistant stage managers and a second-season Chautauquan, has a multi-page list of what props, furniture and costumes need to be where, with everything from nine beers one-third full onstage to an onion on the loge, an elevated area above the crossover that can be accessed by a spiral staircase. As the night progresses, she’ll put an X next to each item. It’ll be about 200 Xs by the time the audience is allowed in at 7:30 p.m..

At 6:48 p.m., Petlick discovers the mannequin doesn’t have a hand.

“That’s tragic,” she said, and vows that she’ll find out why.

A few minutes later, someone shows up with a disembodied mannequin hand. They snap it into place and cart her off.

At 6:52 p.m., crewmembers are placing customized beer bottles and liquor bottles full of water and food coloring behind the onstage bar.

By that point, the mannequin is onstage, and two crewmembers are fussing over the angle that she stands at. She has a hand. She’s ready for her big moment.

At 6:57 p.m., the overflow prop box goes missing. A few minutes later, it’s discovered about 2 feet from where it’s supposed to be.

With 10 minutes to spare before the house opens, a group of crewmembers band together to lift the drawbridge, a large piece of set that swings up and down to change the onstage location. They need it up for the first scene, which takes place in a bar called Stags. The group lifts and pushes from the ground level while two people pull and guide with cables from up in the loge.

The crew’s hustle calms down when the actors and audience arrive at 7:30 p.m., and at 8 p.m., actors get ready to enter. There’s chitchat and stretching. One actor comments on how flexible her costar is. He tells her he does yoga.

At 8:02 p.m., the pre-recorded voice of recently exited CTC co-artistic director Vivienne Benesch makes an announcement to the audience, and the horses are off.

During the show, backstage is calm compared to the manic, often violent action happening onstage. Petlick has a list of every actor or crewmember movement in the whole show as a reference. Her No. 1 role while the actors do their thing is as a backstage manager, and there are moments of downtime.

“It’s not always craziness,” she said. “But the top of the show definitely is.”

About 10 minutes in, the drawbridge is lowered to transform the stage from the dive bar into a more demure, Shakespearian setting, and it’s the actors, not the crewmembers, that change around the details onstage. Hinged wall swings out to hide licentious beer ads and show plain, Elizabethan-appropriate surfaces, while panels on the sides of the set move and reveal classic portraits.

“If everything is going smoothly, you shouldn’t see us on stage,” Petlick said.

The show goes on. Actors and crewmembers come and go. Andrew Richardson, who plays Kate, is quickly changed into an ostentatious pink dress by a whole team of crewmembers.

Stage Manager Jenny Kennedy calls cues from the booth, a small room behind the audience with a broken air conditioner. It’s accessible only via a terrifying ladder.

After the show, the crew strikes the props that are onstage and does a little cleaning. Then they lock up.

They have a day off the next day, but the day after that everyone’s back to do it all over again: every X on a chart, every one-third-full beer bottle, every giant drawbridge.

Petlick loves stage management, though, because she gets to work with all the departments involved. She thinks theater crosses barriers.

“It’s really, really awesome to see how everything comes together,” she said.