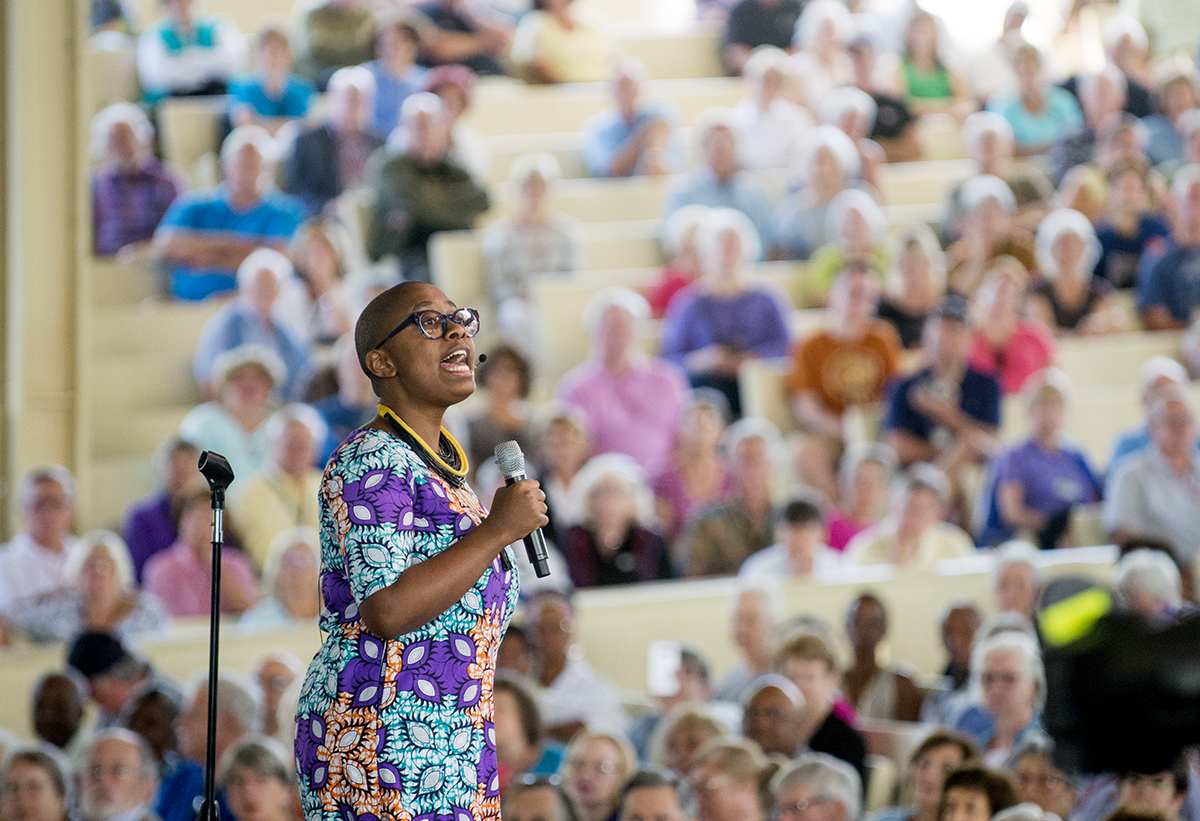 At 18 years old, Cécile McLorin Salvant performed on a stage in a small French club for the first time. She closed her eyes as she sang beside her music teacher from the Darius Milhaud Conservatory in Aix-en-Provence.

In that moment, McLorin Salvant became so nervous she didn’t think she would ever be able to perform with her eyes open as she sang the rhythms and notes of jazz. However, today, McLorin Salvant is the winner of a 2016 Grammy Award for Best Jazz Vocal Album for her record For One to Love.

McLorin Salvant spoke about the storytelling nature of jazz songs during the 10:45 a.m. Wednesday morning lecture in the Amphitheater. She specifically focused on songs that told stories of race and femininity. McLorin Salvant was accompanied by pianist Aaron Diehl, who played as McLorin Salvant sang songs that illustrated her points throughout the lecture.

“When I sing, I think of the song as a story,” McLorin Salvant said. “I spend time trying to get to the center of that story. Once I’m on stage, I try as much as I can to speak directly to the audience through music and to make every word and feeling clear.”

Singing and speaking are directly connected to oral traditions, McLorin Salvant said. Haitian storytellers were entertainers who, through speaking, singing and dancing, conveyed an important message to a community. African storytellers are historians and poets who sing songs about the traditions of the community.

McLorin Salvant wondered if French singing storytellers, known as troubadours, influenced the Haitian music genre Twoubadou. Both forms sang of love and travel and were performed using a lute.

“Maybe I see a connection where there are none,” said McLorin Salvant, whose paternal grandparents were Haitian, and whose maternal grandmother, who was French. “Perhaps I try to find links as they suit me to make sense of my somewhat dispersed identity.”

The connection between storytelling and identity wove through McLorin Salvant’s lecture. She often asks herself, “What is at the center of this story?”

“The question of identity is a powerful one because it justifies a lot of terrible and a lot of beautiful things,” McLorin Salvant said.

Identity is a powerful part of who a person is at their core, and McLorin Salvant said identity can be used in various ways.

“This is where African-American storytelling comes in,” McLorin Salvant said. “It is a way of redefining an identity that others try to erase in the pursuit of control. I believe jazz has been an exploration of identity — affirming it in some instances, borrowing it in others, letting it go, being free of it and eventually coming back to it with an understanding.”

Other times, a person can be robbed of identity. McLorin Salvant told a story of her childhood when a young boy called her an “oreo,” claiming, though she was black on the outside, she was actually white on the inside.

“It was a painful moment for me because it felt like he was taking something away from me — a certain choice I thought I had in who I was,” McLorin Salvant said. “Suddenly there was a specific way in being black, really black, and I wasn’t doing that.”

McLorin Salvant began to wonder what the default identity is. She sang a song by Josephine Baker, first released in the ’30s, titled “Si J’étais Blanche (If I Were White).”

“I admired in the stores the pale tint of blonde dolls,” McLorin Salvant translated. “I would have loved to resemble them, and I said sadly, thinking I was the only brown girl in the world, ‘I would like to be white.’ ”

Baker was the first black woman to star in a major motion picture, and “Si J’étais Blanche” was her way of reclaiming her story. She capitalized her exoticism to show she could create herself and portray herself in any way she pleased. She was not bound by the stereotypes of society, and she refused to play for segregated audiences in Miami and Las Vegas.

“I thought that there was this well of American music really tied to the question of who we are beyond love,” McLorin Salvant said. “It made me curious, and it made me look for more.”

Snow’s performance of the “obviously racist” song “You Bring Out the Savage in Me” stirred an interest in McLorin Salvant to look deeper into politically incorrect songs. Through this search, she came across “coon songs,” which she said were the most “offensive, monstrous, grotesque part of American music.”

“All Coons Look Alike to Me” was created by a black man named Ernest Hogan. The song became extremely popular, and the sheet music featured a design of dark characters with large, bright red lips and wide eyes.

By the mid-1800s, McLorin Salvant said black people were performing in blackface, and it became more popular than whites performing blackface because it was deemed more authentic. McLorin Salvant said she was extremely confused at first why blacks would want to perform these shows. However, she said these shows were “more than what met the eye.” They were a form of self-parody and self-depreciation, but were also a satirization of the prejudices that sometimes had hidden abolitionist messages within it. Blacks were reclaiming the right to tell their own stories.

“Someone else had been telling a broken version of their story,” McLorin Salvant said. “They took the stage in order to tell it themselves.”

McLorin Salvant also discussed femininity in music including songs from the musical Funny Girl, a musical about the life of singer and actress Fanny Brice, and the 1963 song performed by Nancy Wilson, “Wives and Lovers.”

The song is about looking pretty, and McLorin Salvant thought Wilson was ridiculing the stereotype and taking control by singing about it. McLorin Salvant recorded the song for her album For One to Love in 2015.

Though McLorin Salvant enjoyed recording it, she said she received some nasty emails from people who disapproved of the song. McLorin Salvant said women blues singers in the 1920s were “at the forefront of feminist material and song.” They sang about abuse, female sexuality and financial independence.

“I think there’s no better way of reclaiming control than to mock your oppressor,” McLorin Salvant said. “They were breaking down the taboos of female sexuality by unapologetically saying they wanted sex.”

McLorin Salvant mentioned songs like Blanche Calloway’s “Growlin’ Dan,” which made fun of a controlling partner, and Lucille Bogan’s “Shave ’Em Dry.” She followed up this point by singing Bessie Smith’s “You’ve Got to Give Me Some.”

Today, these songs are almost 100 years old, but McLorin Salvant wonders if they still mean something to society today.

“I identify with them because they tell part of my story and part of the story of a lot of women,” McLorin Salvant said. “Today, the word ‘feminist’ is controversial, and activism, for a lot of people in my generation, doesn’t go beyond changing your profile picture on social media. A lot of progress has been made in the acceptance of people who seem different, but there is still much work to be done. There are still people all over the world, all over this country, who haven’t understood that the overriding identity, the one that trumps all, is the human identity. This is what our stories are about.”