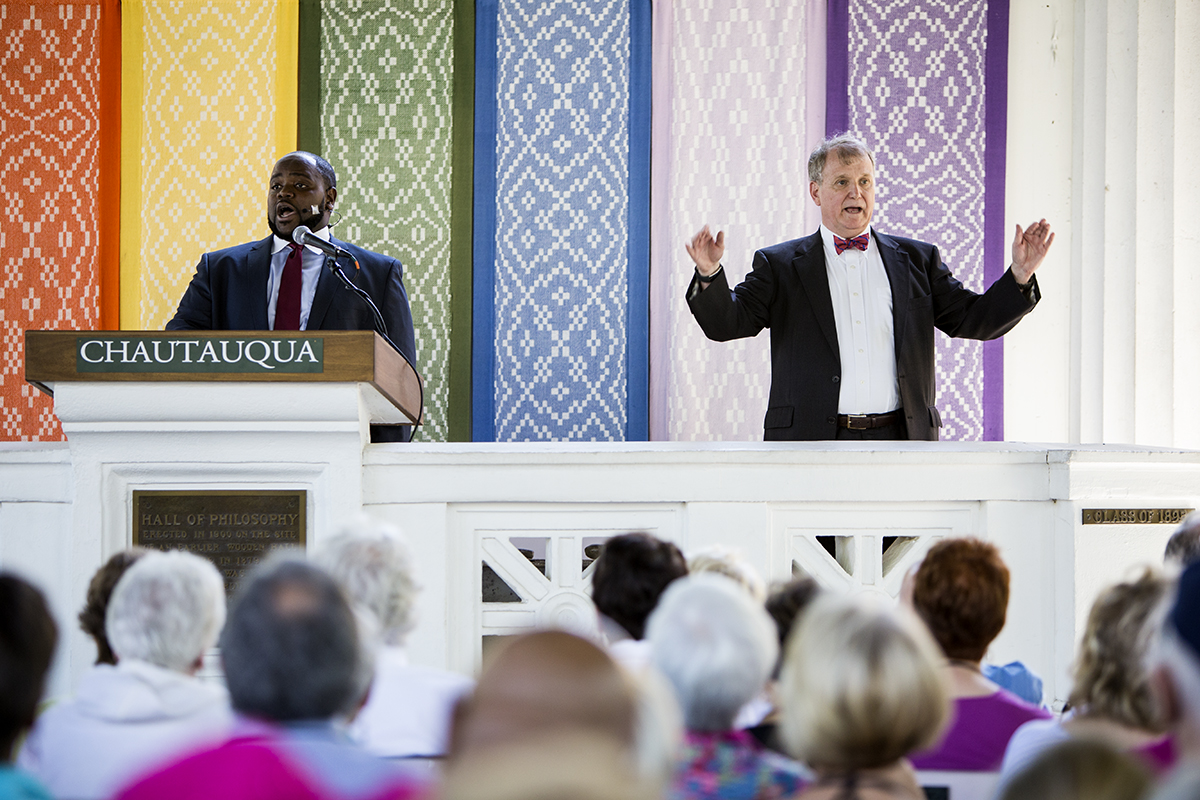 Some Americans like to show their patriotism by wearing a flag pin on their lapel or hanging the stars and stripes outside their window. Baptist Elder John Leland had other, more pungent, ways.

In 1802, Leland wheeled a 1,234 pound block of cheese to the President’s House in Washington, D.C. and presented it to Thomas Jefferson. There are reports it remained there until 1805, when it may have been tossed in the Potomac River.

The cheese wasn’t Leland’s primary claim to fame. Aside from also receiving Jefferson’s famed “Separation of Church and State” letter, he was better known in his day for helping to lead the Second Great Awakening, a movement of religious revivalism that spread across the United States at the turn of the 19th century, and in that Awakening, for penning songs for one of the strangest religious phenomena in U.S. history: camp meetings.

On Tuesday afternoon at the Hall of Philosophy, tenor Timothy B. Miller and choral conductor Steven Darsey, artistic director of the worship arts nonprofit Meridian Herald,  explored and, at times tried to recreate, the spiritual power of those 19th-century camp meetings, showing the effect it had on people and the unique role of African-Americans in the services.

The camp meetings are not themselves terribly strange. Scaled-down versions continue today, although they are generally a shade of their former selves. Starting around 1800, after the crops had been harvested on the western frontier, thousands of farmers would gather in tents in the middle of the woods. They built a 6-foot-tall round platform where numerous pastors would stand and lead the services. At night, they led the crowd in spirituals and shout exhortations — short sermons calling people to repent their sin and convert.

“The most potent service was to be in the evening because there was no sermons there, but also because the majesty of the woods inspire the spirit to come down,” Darsey said.

Here’s where it veers to the strange: During this service, as the multitudes are singing and preachers are shouting about sin, people who believed they had sinned would come down to what were known as the “mourner’s pen” and begin to experience spiritual convulsion. Darsey read from an eyewitness account.

“Sublimity gave way to horror and disgust, above 100 persons, nearly all females came forth uttering howling and groans so terrible that I shall never cease to shudder when I recall,” Darsey read. “They appeared to drag to the pulpit and they were soon all lying on the ground in an incredible confusion of heads and legs.”

At that point, Darsey said, these parishioners would crawl on all fours and bark at trees or jerk forward and backward almost magically, among other convulsions.

Precisely what caused parishioners to exhibit convulsions that seen in a church today would prompt a 911 call is unclear. Darsey said some anthropologists believe that these acts were more African than European and attributed them to the heavy influence of black slaves on the camp meetings.

In Kentucky and other slave states of the Second Great Awakening, camp meetings offered a unique terrain where enslaved blacks and free whites could operate on almost equal footing.

“These two African and American cultures start to blend to form for a uniquely individual culture,” Miller said.

Miller grew up in the rural Georgia and often missed school to attend camp meetings, as he put it, “from can’t to can’t.” From when you “Can’t see in the morning and you can’t see at night,” he said. For him, Miller said, spirituals at camp meetings offered a window back to his ancestors.

Sunday and camp meetings were some of the only moments of respite for slaves and they used to sing deep spirituals. Much of this tradition comes across from West Africa, where people would sing not just on special occasions, but for nearly every moment in life.

“There was a song for the onset of puberty,” Miller said.

He proceeded to lead the crowd in a “rain shout,” an overly positive hymn slaves would sing at the end of camp meetings. It offered joy amid brutal conditions and everyone, from the youngest child to the oldest elder, participated.

Miller explained there were two types of spirituals: narratives and call-and-response.

The narrative told stories, often Biblical, that sent the message that Jesus could help them through the brutal conditions of slavery. Call-and-response is divided to several subtypes: fragment completion; statement and then affirmation from the crowd; question and answer; and finally interruption, where songs will be interrupted with shouts of “Hallelujah.”

Together, Darsey said, these and other forms of black spirituality spread throughout the South. In fact, Darsey said, quoting W.E.B. Du Bois, the distinctiveness of Southern spirituality is owed almost entirely to black worship practices.

“The Methodists and Baptists of America owe much of their condition to the silent but potent influence of their million of Negro commoners,” Darsey said. “This is especially noticeable in the poor south, where worship is a clear copy of Negro method.”