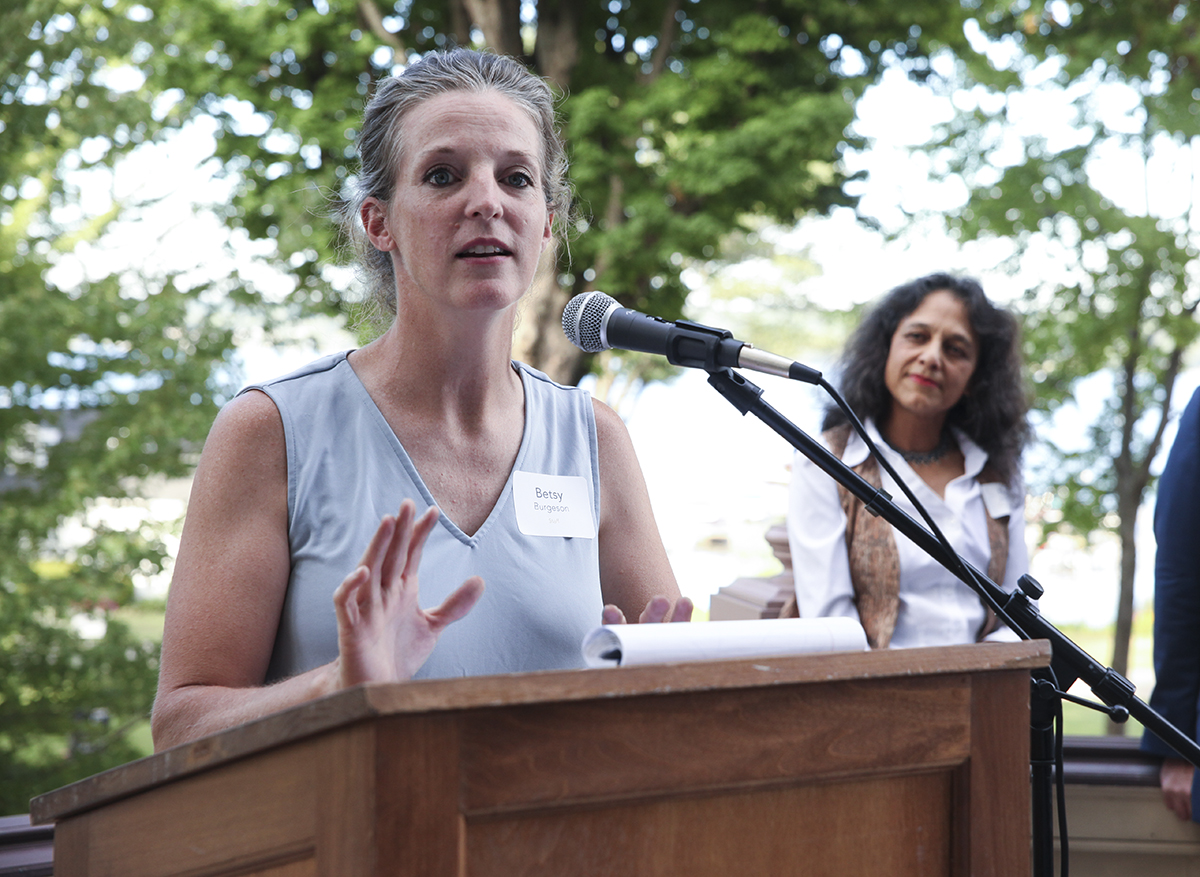 Representatives of Chautauqua Institution’s volunteer groups hugged the bends of the Athenaeum Hotel porch on July 26 as they were honored and thanked for their contributions this season.

Welcoming all to the celebration were Sue Murphy, a Chautauqua Foundation director, and Kyle Keogh, a Chautauqua Institution trustee.

They commended the generous investments of time and labor made by the volunteers to the Institution and the Foundation.

As a gesture of great appreciation by the Institution, Keogh announced the revealing of a newly planted eastern redbud tree on the lawn of the Athenaeum. The tree also happens to be the state tree of Oklahoma.

Speaking as well was Nalini Nadkarni, an ecologist and professor of biology at the University of Utah who spoke on the morning lecture platform July 26. She expressed her indignation at the lack of proper attention trees tend to garner, and how volunteers are often neglected in similar ways.

That movement and change Nadkarni was referring to was exemplified in a unique experiment she had conducted between trees and art. By attaching paint brushes to the branches of western red cedars, Douglas firs and vine maples, and using the natural wind, she catalogued their movements by holding blank portraits next to the swaying brushes. The results she elicited were much like a young child’s arts and craft project. Short sputtering green streaks scratched and cross-hatched the white canvas.

Nadkarni then calculated that over a period of a year, the vine maple had moved a total of 360,178 miles. That’s nearly 15 times the circumference of the Earth.

“Trees can make art,” Nadkarni said. “They can move. You are making worlds move around.”

Nadkarni was succeeded at the podium by Chautauqua Institution’s supervisor of gardens and landscapes, Betsy Burgeson.

She applauded the engagement Nadkarni had brought to Chautauqua. She also praised the serendipity of everyone’s lives, their trajectories and how it had all brought them to the porch of the Athenaeum Hotel that day. She candidly impressed upon everyone the importance of the connection we, as citizens of Chautauqua and the world, have with nature.

Despite the unfortunate correlation between cutting down trees and people starting to advocate strongly on their behalf, Burgeson was very proud of people’s engagement with tree issues this season. She went on, describing the effects of tree aging and their less-than-convenient spatial encroachment. She emphasized how it’s simple forest dynamics, ever-changing, easily capable of ruffling some feathers. But it’s something we have to embrace.

“There is a despair,” Burgeson said of the challenges with Chautauqua’s evolving tree canopy. “But there’s also hope. What tomorrow will bring. We’ve got to think about the future. We’re realizing we can make a difference. And everyone here is making a difference.”