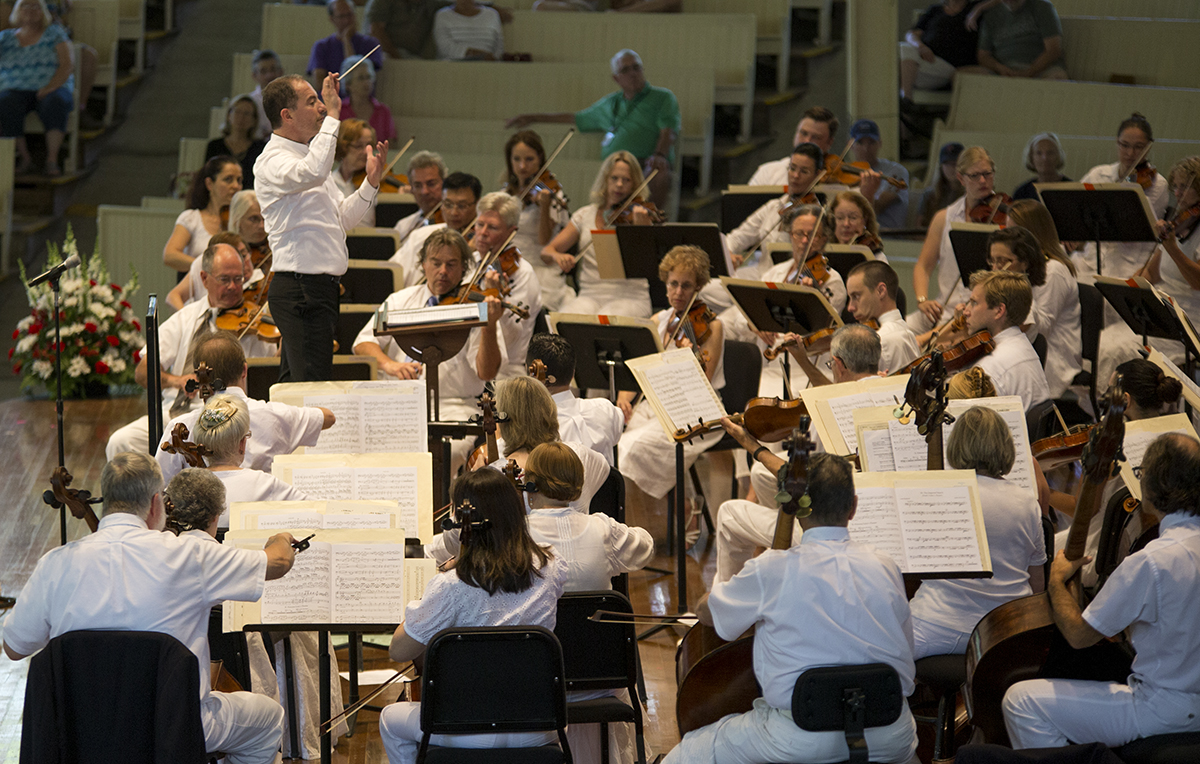 The Chautauqua Symphony Orchestra will play a special matinee this weekend to offer those who visit to Chautauqua Institution for the free Sunday admission a taste of what happens on the weekdays, said Rossen Milanov, principal conductor and music director of the CSO.

The concert will take place at 2:30 p.m. August 7 in the Amphitheater.

“We thought that since there are so many people who come here on Sundays and bring their kids, we could design a family-type concert that could appeal to a very wide audience,” Milanov said.

The typical CSO evening performances tend to be more serious than family-friendly, Milanov said. The concerts also run late, preventing many families with young children from attending the entirety of the concerts.

Milanov said he sees the matinee performance as an opportunity for more people to try out classical music.

The matinee will feature familiar songs that rarely exceed five minutes long. Milanov said that does not affect the way the CSO plays much at all.

“You just have to go through more separate books and deal with a bigger pile of music on your stand, but essentially you are not changing anything about the music,” Milanov said. “I don’t think that something needs to be super-long to fit into the qualification of being a masterwork.”

Rather than playing some entire works, Milanov said the CSO just takes the most popular excerpts to perform. For example, the musicians will play the “storm” movement from Beethoven’s “Pastoral” Symphony.

“There is a very funny piece by Leroy Anderson called ‘The Typewriter,’ ” Milanov said. “So one of our percussion members will step in front of the orchestra and actually play a solo on an old-fashioned typewriter.”

Another selection, titled “Allegro from Toy Symphony” by Franz Joseph Haydn, has percussion parts Milanov said would be filled by children from the Chautauqua community.

During “The Imperial March” from John Williams’ “Star Wars” score, another Chautauqua community member will have the chance to join the CSO on stage.

Gena Bedrosian won an online charity auction in support of the Mary E. Whitaker Symphony Endowment Fund for the chance to conduct the CSO for one song.

“The symphony is keeping [Whitaker’s] memory alive with a golf tournament and fund raisers such as this,” Bedrosian said of the late CSO violinist, who was murdered in her Sherman home in 2014. “[These are] means of remembering her very long career in the symphony and her tragic death.”

Bedrosian, who has no background in conducting but described herself as a “lifelong musician,” said conducting the CSO for a song has always been on her bucket list.

“I went to him prepared as well as I could be with the score and all my little sticky notes and my trusty chopstick in hand,” Bedrosian Said. “He then changed every single thing I planned.”

Bedrosian said her husband and three sons are huge “Star Wars” fans, adding to her excitement to conduct the piece.At 12 minutes long, Pyotr Ilyich Tchaikovsky’s “1812 Overture,” Op. 49, earns the title of the longest piece in the program by far, Milanov said, but he chose to add it for a reason.

“It is done so often. We played it on the Fourth of July, but they just do the last part,” Milanov said. “I want people to hear what is happening before that because it is pretty spectacular.”

Another example of that illustrates itself in Felix Mendelssohn’s “Wedding March” from A Midsummer Night’s Dream.

Everyone hears the song at wedding ceremonies, Milanov said, but don’t realize that it comes from a bigger piece. The CSO will play the entire selection Sunday afternoon, rather than just the first few measures listeners usually hear.

Milanov said the informal, shorter concert provides a “painless” way for people to be introduced to classical music.

The Rise of Interfaith Solidarity