The Rise of Interfaith Solidarity 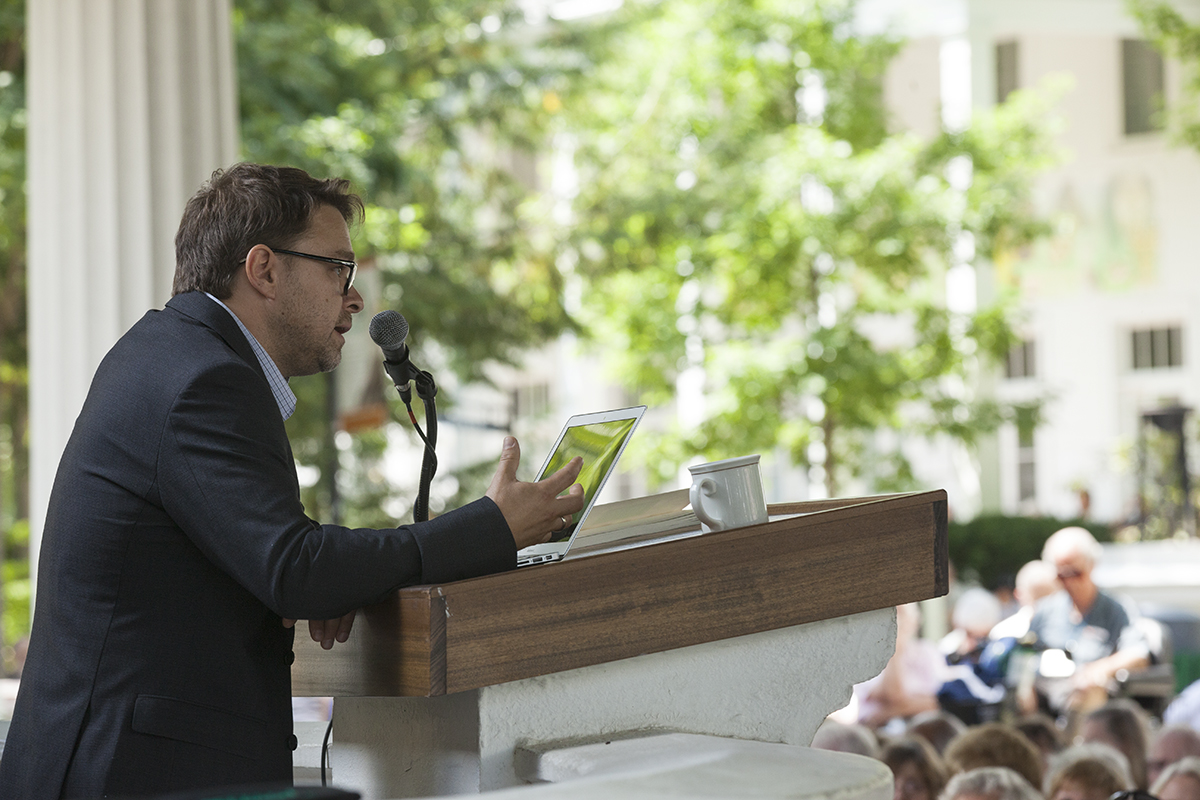 In the hours after a Muslim man massacred 49 people in a gay nightclub, as Donald Trump used the shooting to bolster his argument that Muslims are terrorists, 465 Muslim leaders from numerous organizations across the United States published a joint letter extending condolences to everyone affected, condemning the violence and calling it a perversion of Islam. The same day, Nihad Awad, the executive director of the Council on American-Islamic Relations (CAIR), issued a statement.

On Thursday at the Hall of Philosophy, Muslim activist and scholar Timur Yuskaev argued those statements of solidarity were not merely banal platitudes designed to keep those who signed it in good public standing. They were signed by Muslims who have been intricately involved in interfaith activism, Yuskaev said, particularly in the years since the 9/11 attacks. He argued in order for America to transcend its polarized, cynical and, at times, hateful political climate, all faiths will need to embrace what Yuskaev calls “deep pluralism,” in which different backgrounds do not only claim inclusiveness but in fact stand in strong solidarity with each other.

“It’s not shallow pluralism of identity politics, of labels, of including people: ‘Oh, you’re Muslim. You’re female. You’re a part of us, but we do not listen to you. We will not pay attention to you and we will dismiss you the second you disagree with us,’ ” Yuskaev said. “It’s deep and multidimensional. It includes … respect for the cultivation of different ways of living.”

Yuskaev said he knew the outpourings of sympathy after the Orlando shootings were not insincere because many of the activists who signed the statements had previously stood with LGBT activists.

In the weeks and months after the 9/11 attacks, the New York City Police Department began rounding up and detaining young Muslim-American men. The first to stand against that discrimination was an organization called Racial and Economic Justice, which picketed for months outside of the Metropolitan Detention Center in Brooklyn, New York. Many of those picketers were gay, Yuskaev said.

Muslim solidarity with LGBT people is therefore an extension of interfaith activism. Yuskaev said when he asked Muslim leaders if they worked with any gay people, many, they said, were rabbis. In another example, a few Muslim leaders were attacked by right-wing politicians and media for trying to open an Arab-language public school in New York. Rabbis from congregation B’nai Jeshurun, the second-oldest synagogue in New York, stood in strong solidarity with them, Yuskaev said.

Yuskaev said the rise of interfaith work and interfaith solidarity is in fact a product of greater inclusivity within the Muslim community. Women have long held informal leadership roles in mosques, Yuskaev said, but since 9/11, the number of mosques with women on official board positions has risen from 50 to 59 percent.

Yuskaev said although many within other faiths do incredible work, it’s important that some need to match the Muslim efforts. According to survey data from the Hartford Institute for Religion Research, interfaith work is one of the most important things to Muslim communities today, although it has become something of an afterthought in many churches and synagogues.

But when that interfaith work happens, Yuskaev said, it can be incredibly transformative. It not only leads to social action, but to people transforming themselves and their views on the world, Yuskaev said. Amid all the Muslim-American community has faced since 9/11, those transformations have been silver linings.

“I witnessed [the transformations] happen when they began this wave of what some call Islamophobia, which amounts to dehumanization of people who are Muslim,” Yuskaev said. “Dehumanization is not new, which is why some of my deepest partners, people from whom I learned secrets of the game, were in the African-American community.”