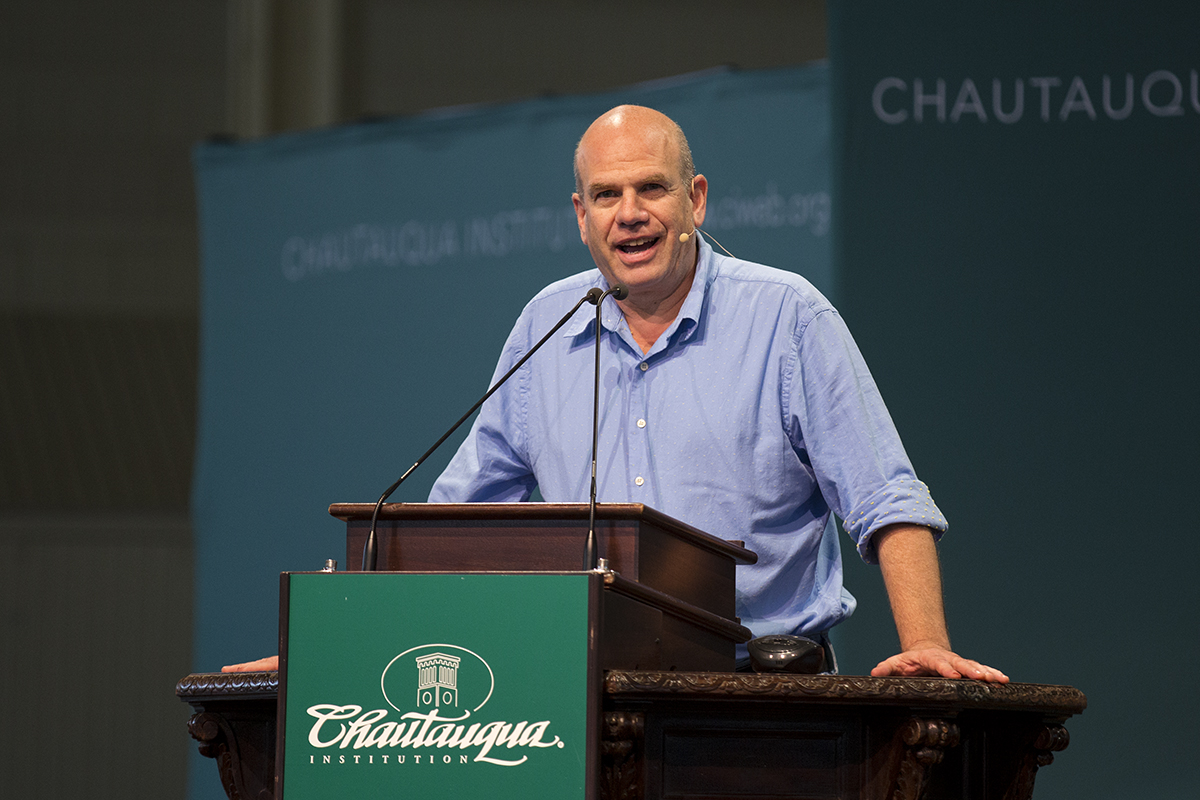 Three years ago, journalist and producer David Simon opened Week Six and the theme “Crime and Punishment” by speaking in the Amphitheater about the drug war and mass incarceration.

At 10:45 a.m. Monday, Simon again opened a Week Six, this time on “The Future of Cities,” by continuing his  topic from 2013, discussing Baltimore and the issues the city currently faces: distrust in the police department, mass incarceration, nonviolent drug arrests and less than 10 percent of murderers being prosecuted.

“This is, in some sense, the cost of what we talked about three years ago, and it’s being borne now,” Simon said. “It was sort of inevitable.”

In 2002 Simon created the television series “The Wire,” which looked into the drug scene in Baltimore from all parties involved — the users, the drug dealers and the law enforcers.

Simon said as the drug war continues in America, trust has deteriorated in communities. He believes police are not making the correct arrests, and the criminal justice system must be reformed to restore trust and detain people who have dodged the system.

“I’m not suggesting the edifice of mass incarceration or the disaster that is the American drug prohibition is about to fall, but it is in some retreat,” Simon said. “The whole code of locking up other Americans for what is, essentially, a public health problem and using that as an overlay for social control and for racial control has started to fall.”

The greatest asset to a police department is information, according to Simon. However, with distrust in law enforcement, people are not providing the police with information anymore. As a result, nonviolent drug users are ending up in prisons while violent attacks continue and murder rates increase.

When Simon worked for The Baltimore Sun from 1982 to 1995, it was not uncommon for individuals to call the police department and give information about violent citizens or illegal activity. However, Simon said the phone no longer rings in the Baltimore Police Department because “they locked everybody up.”

“The problem, basically, is this: We gave the police department an impossible task, which was to enforce an unenforceable prohibition,” Simon said. “In doing so, we gave them a tool for social control over the poor and over these neighborhoods where the drug culture became entrenched — that was most blunt and brutal hammer you could possibly hand someone.”

Over the last 30 years, Simon said, he has seen police officers walking away from real police work. Instead of focusing on making what Simon categorizes as “real arrests,” police are too engrossed in the drug war and containing it.

He used a hypothetical police officer who made 30 arrests in a month, all of which were of nonviolent drug users. This police officer will get overtime and a promotion and then will be teaching a new class of police officers to look for the same types of crimes.

Simon said a city with poor neighborhoods like Baltimore is bound to have a drug problem regardless of police intervention.

“The corner is the one place that’s hiring in West Baltimore when all the factories are gone,” Simon said.

However, he argued, that arresting these drug users is not resulting in less crime in the city. Simon said the clearance rate for homicide cases is about 17 percent in Baltimore today, which means there is less than a 10 percent chance of a violent person being punished for their crime.

When Simon worked with the homicide unit in Baltimore during 1988, the clearance rate was 70 percent, and about 40 percent resulted in jail time.

“We can all argue about what we want the police to do in our society and what they should be engaging [in],” Simon said. “I am all for the police locking somebody up when they take a human life.”

Simon said homicides in black communities are reaching extreme highs because violent criminals are not being prosecuted, which he referred to as a form of genocide. He argued that if this were happening to white society, the issue would have already been addressed.

“The drug war justified an increasing level of abuse and of bad policing,” Simon said. “We felt, in our fear and of our worry of drugs, that we were doing something meaningful. What we were really doing was teaching the communities of inner city Baltimore that the police lie, and when you really need them to do police work, they’re incapable.”

As a result, murder rates climb, and citizens begin to distrust the system. However, not all tactics the Baltimore Police Department used failed. Simon discussed a tactic in Baltimore that did result in a decrease in homicides and overall crime: targeted arrests.

The police department asked different units for the names of repeat offenders. A list of 110 men was compiled, and police officers began to target these individuals and watched for a probable cause for arrest.

Not surprisingly, Simon said, homicide rates dropped. In 1991, the number of murders in Baltimore dropped by half the original rate. Despite this effort, the issue of mass incarcerations continues to be a pressing one today.

Simon said the drug war needs to be addressed by “aggressive public health and social work intervention.” Because of this war, America has the largest number of incarcerated people in the world. Simon said these are raw numbers, not per capita. This means that the U.S. has more people imprisoned than China, despite China’s total population being roughly five times larger.

However, some states are trying to solve the issue of mass incarceration. Simon used Georgia Gov. Nathan Deal as an example. Deal made an effort to close some prisons and release prisoners with lesser crimes. Simon said Deal even went to prisons to meet the individuals he would be releasing.

To Simon, Deal’s efforts are paving the way for moving the nation away from mass incarceration based on the drug war and social control.

Simon believes poor areas, like the black majority communities in Baltimore, are suffering the most from mass incarceration and social control. Drugs are prevalent on the streets of these areas, which leads to more nonviolent drug arrests than wealthier suburban areas.

“We’ve reached a level where we’re trying to use the drug war and the manifestations of this level of policing as social control,” Simon said. “This is what we’re doing with our poor — let’s get rid of the poor. If we say ‘kill the poor,’ we’d be a little more honest.”