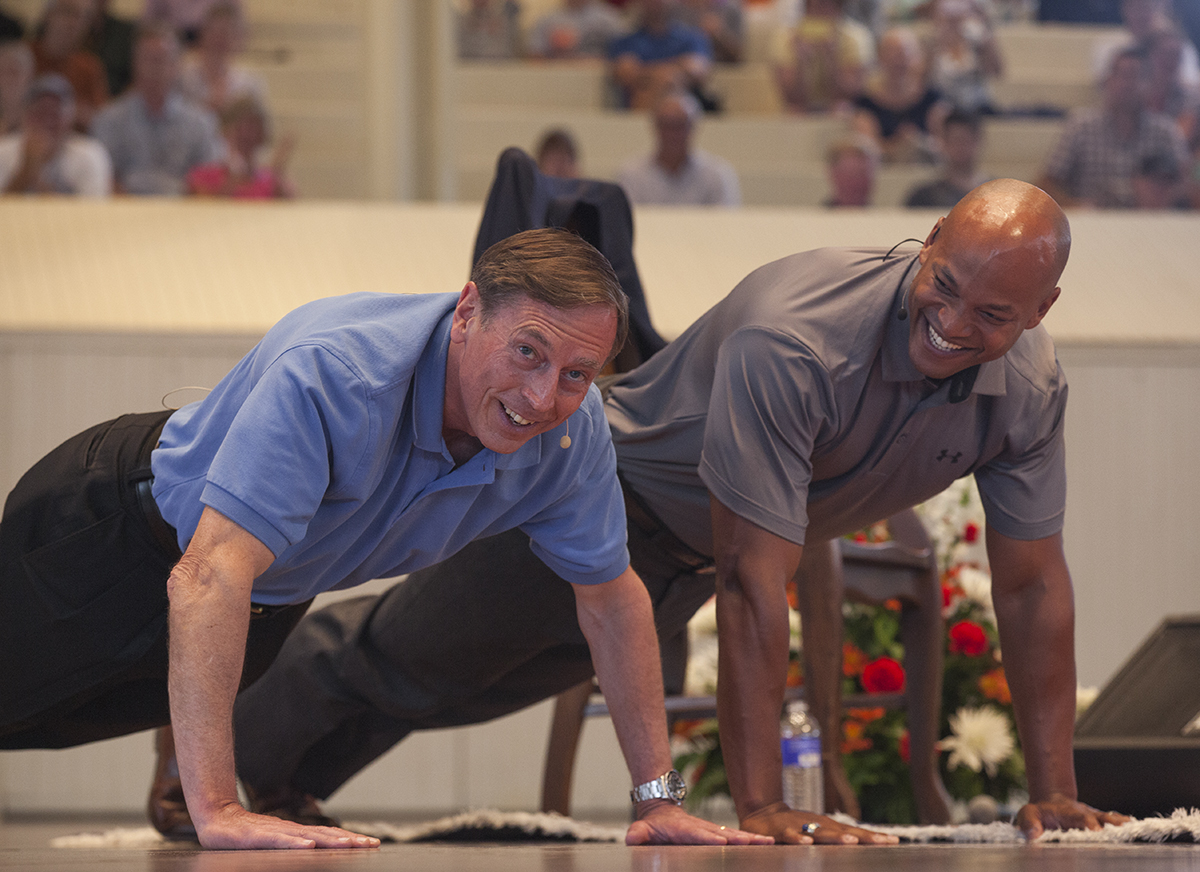 Side-by-side, they squared up their shoulders and began to do pushups as the audience counted.

At first, the counting was slow, but the closer Moore and Petraeus got to 22, the faster they began to complete their pushups.

Every day in the United States, between 20 and 22 veterans take their own lives; Moore challenged Petraeus to complete the 22-Pushup Challenge to raise awareness of veteran suicide. The veterans completed the challenge together.

Moore, executive producer of the PBS special “Coming Back With Wes Moore,” interviewed Petraeus about U.S. involvement in foreign affairs including Iraq, China and Russia during the 10:45 a.m. Thursday morning lecture in the Amphitheater.

Petraeus talked about the Chautauquan belief in lifelong learning and how continued learning applies to the military.

“I am a huge believer in lifelong learning,” Petraeus said. “I believe you never do stop learning [and] you certainly never should. In fact, in the kinds of the wars in which we are engaged and in which I was privileged to lead some pretty large units, we believe that the side that prevailed was the side that learned the fastest.”

When it comes to strategic leadership, a key component lies in analyzing the situation to come up with the right ideas and the right strategy. Petraeus said lifelong learning comes into play if the first idea isn’t the right one.

Instead of trying the same tactics over again, Petraeus emphasized the importance of learning the strengths and downfalls of every mistake to strategize a new method for any military mission a unit is undergoing.

“The surge that mattered was the surge of ideas,” Petraeus said. “It was the change of strategy almost 180 degrees in every single discrete element that we had from consolidating our big bases to realizing the only way to secure the people was by living with them.”

President George W. Bush implemented “the surge” in 2007 by increasing the number of American troops overseas in an effort to provide security to Baghdad and Al Anbar Province.

The beginning of the surge started with Petraeus’ counterinsurgency strategy, which was a new approach attempting to gain the trust of the Iraqi people. Petraeus expanded the number of bases across Baghdad to help the American soldiers build relationships and prevent civilian casualties. Through his experiences as a commander and general, he learned treating insurgents as enemies was not working and the U.S. military took a different approach.

“Embracing reconciliation — realizing that you cannot kill or capture your way out of an industrial extremist insurgency,” Petraeus said. “You have to reconcile with as many of the insurgencies as possible.”

While in Iraq, Petraeus said then-Prime Minister Nouri al-Maliki pursued sectarian policies that would guarantee his re-election, but alienated the Sunni Arab population. Part of the surge aimed to bring that section of society back into the community.

“He pursued policies that alienated, once again, the Sunni Arabs … — who had felt cut off from society and alienated before by the policies of the first few years of our involvement there, who we brought back in the fabric of society,” Petraeus said. “The real achievement of the surge, in fact, was to bring the fabric of society back together.”

Petraeus put forth five lessons that can be taken away from the war in Iraq during the past five to 10 years. The first lesson is that ungoverned spaces will be exploited by Islamic extremists. Petraeus said the question is no longer “if” but “when.”

Second, he said, “Las Vegas rules don’t apply in these situations.” He called Syria a “geopolitical Chernobyl” that has erupted with violence, extremism, instability and a tsunami of refugees.

The third lesson, when responding to those situations, is how imperative American leadership is to resolving those conflicts. Petraeus strongly believes in creating coalitions and partnerships to overcome those challenges.

“For the major problems, we are going to have to lead the way,” Petraeus said. “I know what it takes in terms of time and effort to do coalition maintenance. It’s a serious undertaking, but, at the end of the day, it’s worth it.”

The fourth lesson to be taken away from U.S. involvement in Iraq and Afghanistan revolves around America’s leadership position in those conflicts. When dealing with that situation, Petraeus said the United States has to craft and establish a comprehensive approach.

“It’s not enough to just do a counterterrorism campaign,” Petraeus said. “You can’t drone strike and Delta Force raid your way out of these problems. It takes all of the above. The United States has more of the assets that really matter in the kinds of conflicts that are evolving. The assets that we bring … are many multiples of what all our possible allies and partners could muster together, so there’s just no substitute for the United States.”

The final lesson: acknowledging the Iraq War is a generational struggle. Petraeus said although the U.S. involvement is crucial, the government needs to do as little as possible, but as much as necessary, in order to be cost-effective when approaching the war.

Moore steered the conversation to U.S. involvement in foreign countries by asking Petraeus about Vladimir Putin’s motivations in Russia to return the former Soviet Union to its previous state.

“Oftentimes when conversations about foreign policy happen, you will have people who will number it down to ‘who are the friends and who are the enemies,’ without understanding the complexity that plays in that situation,” Moore said. “Instead of asking the question, ‘Is he a friend or is he an enemy or what does his soul look like?’ … the question really is about, ‘What are his motivations and interests and how do they align with our motivations and interests?’ ”

Petraeus said Putin sees the fall of the Soviet Union as one of the most catastrophic events in history. Putin wants to reinstate the “Russian Empire” and has pursued his efforts physically by invading neighboring countries such as Georgia and Ukraine.

Petraeus said Russia used to have economic strength in selling energy to the rest of the world. Today, Russia is no longer the world’s No. 1 oil supplier. Petraeus said the United States has surpassed Russia after the development of new technologies in oil refinery. With 60 percent of Russia’s economy relying on the oil industry, Petraeus said it will serve as a major disadvantage to the country.

Economics often plays as a major motivation for rulers. Moore asked Petraeus about the economic transition in China and if that transition is concerning to him.

Petraeus said he’s currently watching for “muscle-flexing” in the South China Sea, but his main focus involves the transition of China’s economy.

China achieved record economic growth no other country has achieved in global history, he said. China experienced doubt-digit growth in gross domestic product for almost two decades. The nation was able to do that through low-cost labor, urbanization and huge government investments in infrastructure.

However, as GDP continues to rise, so do labor costs. China is no longer the largest low-cost labor provider in the world, and today, it has the largest debt-to-GDP ratio in the world. At the same time, the government is fighting problems with pollution. As a result, the Chinese economy continues to slow down.

At the end of the conversation, Moore asked Petraeus what can be done to better help servicemembers when they return home, a pretense for presenting the retired general with the 22-Pushup Challenge.

Together, Moore and Petraeus completed the challenge in front of the audience and encouraged them to complete the challenge after the lecture to raise awareness of veteran suicide rates. After, Moore put forth the challenge to television personalities Willie Geist, Joe Scarborough and Steve Harvey.

They completed the challenge, but Petraeus wasn’t done with the pushups.

“One more for the big ranger in the sky,” he said.