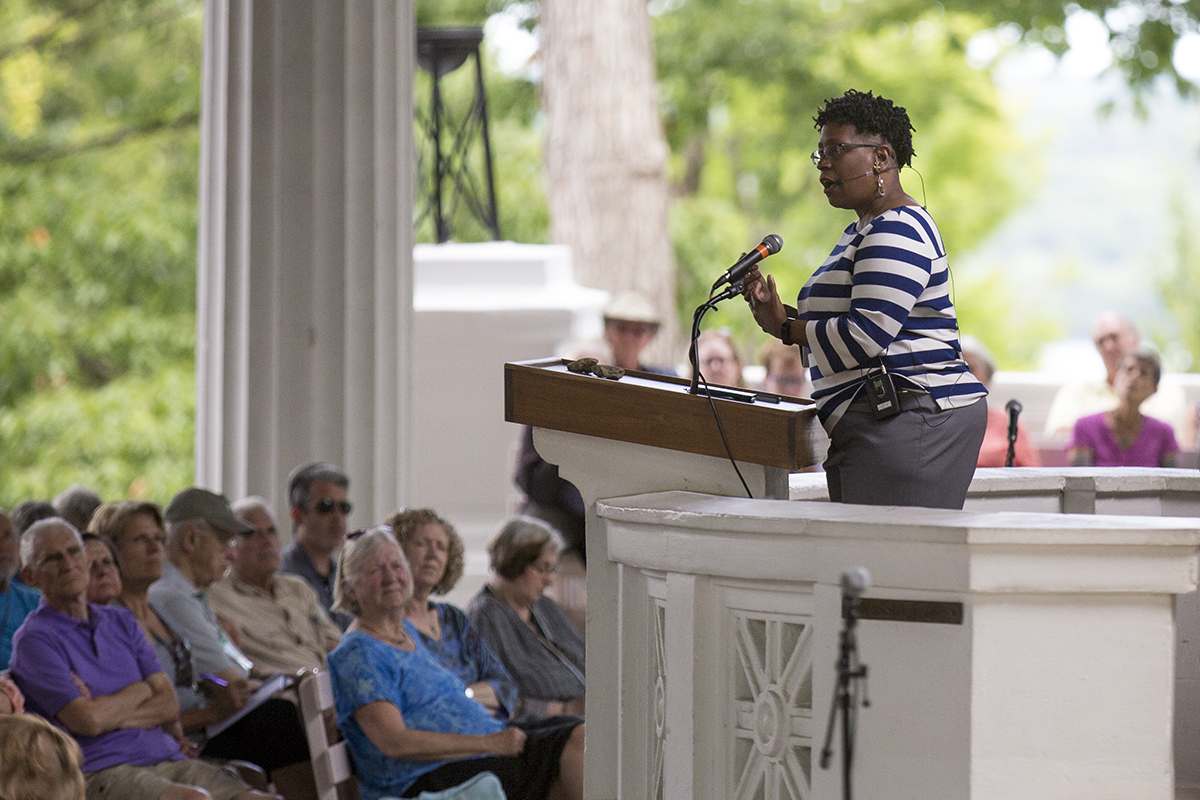 Pamela Lightsey demonstrated a fist-bump on the Interfaith Lecture platform at the Hall of Philosophy Wednesday afternoon.

It was not some casual gesture, but rather “giving dap,” a greeting that once spoke to a the unique and harrowed history of African-American veterans.

As Lightsey, a war veteran and the first out black queer lesbian woman ordained as a minister in the United Methodist Church, explained, “giving dap” was an exercise in solidarity that spoke to the unique bonds among black veterans of the Vietnam War. The “fist-bump heard ‘round the world” between Michelle and Barack Obama upon claiming the Democratic presidential nomination in 2008 was a gift from those veterans, Lightsey said.

“It was a cultural product of keeping them connected, communal inasmuch as it was of deep bonding,” said Lightsey, who is now associate dean of the Boston University School of Technology.

After two days of speakers explaining the impact of moral injury on veterans, Lightsey discussed how blacks face a unique and more acute form of moral injury as they grapple with not only the moral ramifications of what they did in war, but also whether they should have done those things for the United States.

“Questions of guilt, shame and grief post-war are more complicated for African-American veterans who may ask, ‘How can I be a good person to God, that I did these things and why did I do these things for a country that is so bad to my people?’ ” Lightsey said.

Lightsey said it is important to understand that not all soldiers enter war equally. All are products of the social circumstances they grew up in, be they low-income, LGBT or people of color. The result is that they come in as “socially constructed bodies.”

Since before the Civil War, Lightsey said, blacks did not see enlistment as primarily a matter of defeating the enemy or defending their country as their white comrades did. Rather, they joined for a variety of non-patriotic reasons: because black preachers predicted it was a method to end slavery, to make a living wage, to escape particularly bleak living environment or to defend oneself against genocide, as was the case in slave rebellions. Arguably the most important reason, though, was to prove their humanity.

“Blacks saw violence against the other as a way to prove that you are human, to prove that they were not mere brutes, mere animals with little capacity to handle day-to-day realities of life without help of a slave master,” Lightsey said.

At first that was an uphill battle, Lightsey said, even within the military. Black soldiers were at first used only as a last resort when white casualties demanded replacements.

Through the present day, the goal of proving humanity put an undue burden on black soldiers. It means they have to not only think about their own safety and the safety of their unit in battle, but they also have to bear the burden of an entire race.

For them, moral injury is “not that I let down my upbringing, the shame and guilt of having let down my friends and family, but more the expectation your behavior reflects on entire race,” Lightsey said.

Further exacerbating the effects of moral injury is the fact that racism had afflicted extreme trauma on many of those soldiers at home in peacetime, Lightsey said.

For Lightsey, that issue hits the homefront. Her entire family served in the military. She recalled how her uncle died of psoriasis of the liver, but her family spoke of him dying years before that, when the Korean War transformed him from a kind to a haunted man. And when Lightsey started to discuss the second Iraq War she mispronounced President George W. Bush’s name.

“It’s not out of disrespect, but because it triggers me.” Lightsey said.

Her son had enlisted in the military at age 17 and served in Kuwait and Iraq. When he returned home, Lightsey said, he looked great and enrolled in college. But soon the realities of racism in America began to grind on him and exacerbate the psychological trauma from war. He was stopped repeatedly by police, including once when he was sitting in his car in front of the library and someone reported a “suspicious black male.” His last semester in college, he vanished. He was unreachable by phone and didn’t show up to class. But when Lightsey called the chaplain at the school church to ask if she’d seen him, the chaplain said yes, every week.

Church saved him, Lightsey said, as it can for many African-American veterans who are suffering moral injuries. But churches must first make sure they are a welcoming environment and do not victimize veterans.

“I believe that faith communities that really want to honor our veterans must be sensitive to our own liturgy and our sermons,” Lightsey said. “We must be careful, lest we run the risk of triggering our veterans.”