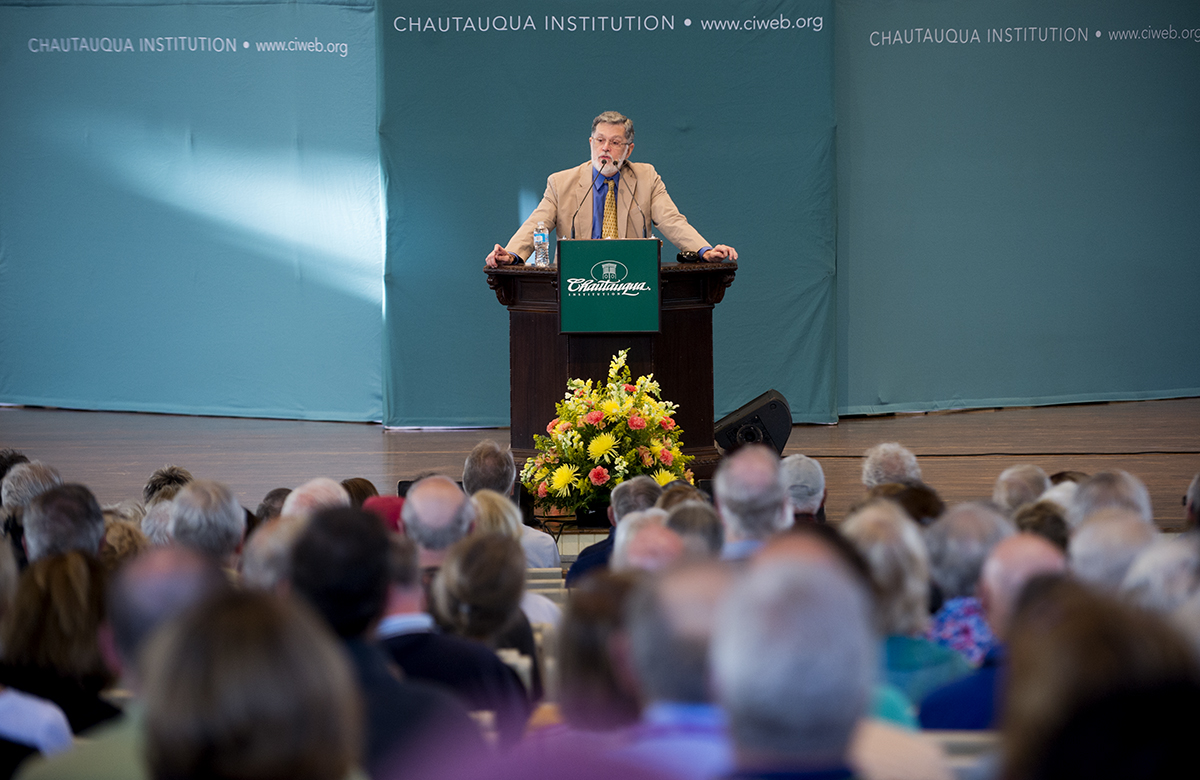 At age 9, Geoffrey C. Ward fell ill with polio. In 1949, doctors thought it was best for young children not to know about their illness because knowing might frighten them. Parents’ visits were limited to an hour per week.

As a result, young Ward laid in his hospital bed scared and lonely for three months. There wasn’t much for Ward to do, but he was permitted to have a radio.

Ward said the 1940s was a time of drought in the world of music — the big bands were gone and rock ‘n’ roll hadn’t been born yet. But, one day, a different type of song played through the radio speakers, opening with the ringing of a trumpet as Louis Armstrong and His Hot Five performed “West End Blues.”

Though Armstrong’s recording first played in 1928, Ward said the song is as moving to him today as the first time he heard Armstrong’s strong trumpet solo and smooth-flowing scat singing. From that day on, Ward’s love of jazz and the blues thrived.

Ward, a historian, screenwriter and former editor of American Heritage, discussed his love of jazz, critics’ and writers’ skewed perception of jazz and how important it still is today during the 10:45 a.m. Tuesday morning lecture in the Amphitheater. Ward also wrote Ken Burns’ 19-hour documentary film “Jazz.”

“The ‘West End Blues’ spoke to me as nothing else ever had,” Ward said. “It somehow seemed to incorporate all the sadness in the world, but all the happiness and hope as well. I knew I wanted more of that music, and, not long after I got out of the hospital, I gave up comic books and began to collect jazz records.”

As Ward began to learn more about jazz, he realized he became an “unwitting victim” of what he read. Ward said he found it strange “that jazz, which is surely America’s most important contribution to the arts, has received so little critical attention.”

Ward attributed this to the idea that jazz was largely created by the “least-respected, most-derided segment” of society during that era. However, as Walt Whitman said, America is a nation of nations. Similarly, Ward said jazz is a music of musics — made up of Irish influences, Caribbean dancers, Spanish guitars, West-African percussions, regional music from every part of the United States and the spirituals and work songs from slave days.

Jazz has no boundaries of race and gender. Ward said Armstrong enjoyed listening to the Irish tenor John McCormack at a young age. Race didn’t matter to jazz musicians. The only questioned that needed to be answered was, “Can you play?”

“Jazz is the living definition of integration,” Ward said. “Everything and everybody has a rightful place.”

According to Ward, jazz writers often unnecessarily complicate jazz. One commonly discussed question among writers is: Who owns jazz music? Is it black or white? It was clear to Ward that this notion of race did not matter to musicians — only good music mattered.

Writers also treated jazz like a “musical relay race,” Ward said, as if a baton was handed off to the next great jazz artist and style of the genre. Ward disagreed with this idea expressed by writers because music by Armstrong, Duke Ellington, Charlie Parker and Ornette Coleman was being created at the same time with extraordinary differences.

Some writers only paid attention to innovators in the jazz industry, building the idea that “if you’re not a revolutionary, you don’t count,” Ward said.

The idea expressed in jazz writings, that black musicians had a natural gift, changed the way they performed. Ward said some black jazz groups would hide their sheet music because if it were in sight, it would ruin the illusion that blacks are naturally gifted musicians. He also said black swing bands only played uptempo songs because it encouraged the myth of the musicians’ natural ability.

According to jazz pianist John Lewis, there are three elements to jazz: swing, surprise and the eternal search for the blues. Ward said he doesn’t know a better definition.

He said jazz trumpeter Wynton Marsalis said swinging requires three things as well: extreme coordination, because swing is like dancing with other people who invent their steps as they go; intelligent decision-making, because what’s best for one musician may not be best for the group as a whole; and good intentions, for everyone in the group to have a shared interest in creating good music.

“He wanted to hear something fresh and unexpected that grew not from a need to be different, but organically, honestly from within the musician herself or himself — something that musician and only that musician could find to say,” Ward said.

Blues, the third element of jazz, is timeless. The blues tells a story that can be happy or sad, real or fantasy.

“The blues have swept the world because the blues encompass so much of the world,” Ward said. “The moans and cries of the heart of the blues are part of all human expression. The blues expressed the whole range of human relations.”

Ward said those stories can be about anything from empty pockets to horrible bosses to the devil. However, the “fraught relationship” between men and women continues to be the most widely written about story for the blues.

Traces of the blues can be found in almost every style of American music, including country, western and hip-hop, but the blues is especially central to jazz.

The jazz music that rang out in dance halls, saloons and street parades in New Orleans still continues to be played loud and proud today. Ward said he loves how jazz echoes the past, but, at the same time, can still sound brand new.

According to Ward, Marsalis said jazz continues to hold hope. The hope promised by jazz is what got Bix Beiderbecke out of bed at 2 a.m. to practice the trumpet into a pillow, and what inspired Armstrong to travel around the world performing for 50 years. It gave a “glimpse of what America is going to be when it becomes itself. This music tells you that it will become itself.”

When Ward was 17 years old, his parents sent him to Paris to study French for the summer. He had just lived in India for three years and felt cut off from his home country and his family.

One day when Ward wandered into a working man’s cafe across from his dormitory, he saw a jukebox that had “West End Blues.” Ward dropped his coin in and felt home again as the sounds of the song engrossed him. He played “West End Blues” over and over again to the point the man behind the bar called Ward by one of Armstrong’s nicknames, Satchmo.

“Louis Armstrong was my link to home, to what it means to be an American, to feeling better about things and getting on with your life,” Ward said. “For me, today, almost 60 years later, he still is.”