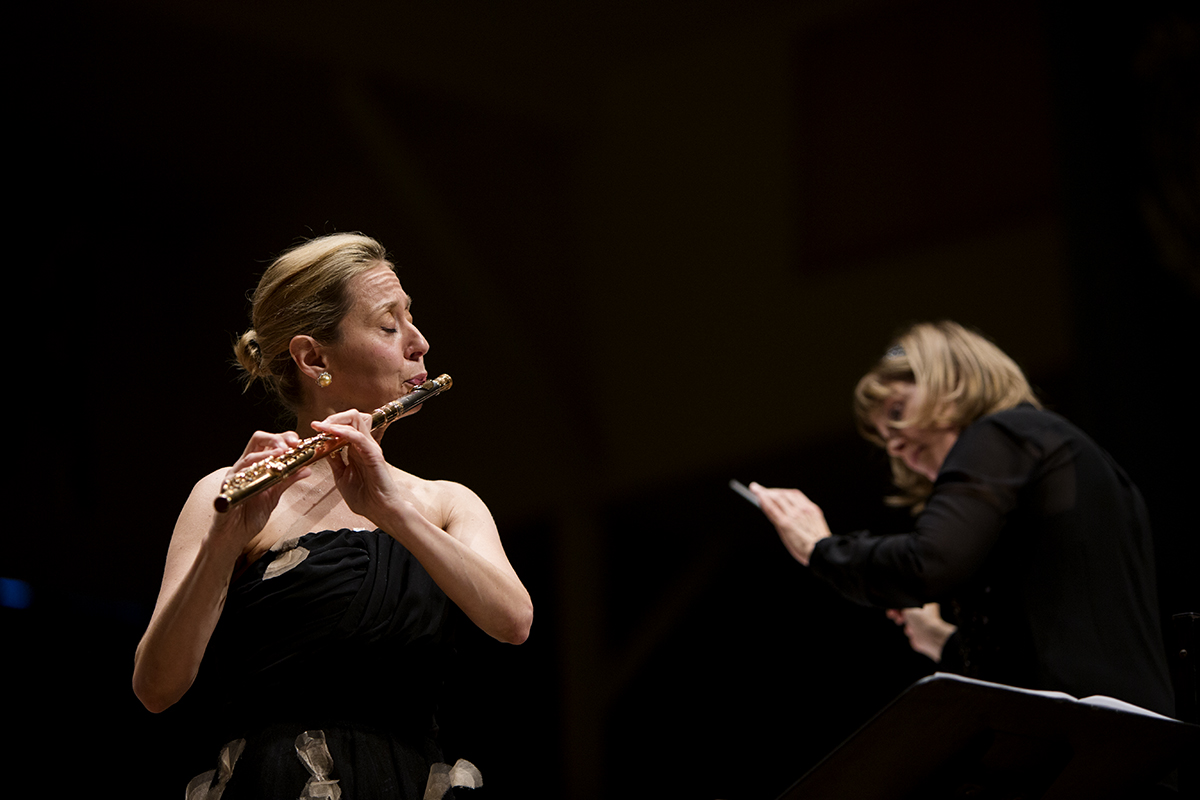 Those from this region are well aware of Falletta’s renown with the Buffalo Philharmonic Orchestra and her unique skill of eliciting the best playing out of musicians. In the past decade, she surely has become the most-recorded conductor with five orchestras; her signature dedication to promoting American music has resulted in more than 110 world premieres and more than 500 performances of American works.

Therefore, her collaboration with flute soloist Marina Piccinini, another fervent champion of American music who has given debut performances by many major composers, was an inspired one. Piccinini performed “Flute Concerto” by Aaron Jay Kernis, which she premiered with the Detroit Symphony Orchestra earlier this year. The work was jointly commissioned for her by that orchestra, Rochester Philharmonic Orchestra, Peabody Institute in Baltimore (one of the schools where she teaches) and the CSO.

A commission is a leap of faith for any soloist, hoping the chosen composer will write music that embraces their musical personality. In this case, Kernis felt free to write for an artist with enormous technical and interpretive skills. His big-boned, four-movement piece contains immense difficulty for the soloist and complex orchestral scoring, yet is a most listenable and fascinating work. Most movements begin softly and, according to Kernis, spiral out of control, but he has said the three were actually inspired by ancient Italian dances.

Piccinini took the stage in an elegant black strapless dress with silver butterfly patterns on its long, flowing skirt. She immediately began the first movement, Portrait, with a solo passage from the lowest note her instrument can reach, one of many plaintive, flowing phrases that often reached her upper limit as well. After one orchestral crescendo suddenly stopped, the flute sustained a note and began another ascending line, a startling effect. It’s such an inventive movement that it would be a brilliant showpiece by itself.

Pastorale-Barcarolle also pairs soaring flute passages with building outbursts, this time coming slowly to Earth and ending in an ethereal solo line. Pavan, after climbing from delicacy to a frenzy, halted for a stunning, trill-laden cadenza, with dazzling runs before a big climax.

The final Taran-Tulla had a different structure, this time a jaunty opening leading to sections where the flute lines and rampaging orchestral sonorities seemed on different tracks, but somehow seemed to eventually unite — as if Kernis simply had an abundance of musical ideas. Halfway through, a feeling like a swing band cast a shadow, and the spotlight turned on Piccinini to perform some flutter-tonguing, double-and triple-tonguing and probably other oral manipulations devised by Kernis. She even accomplished a unique singing sonority across her instrument, an effect not likely to be found in any flute study literature. (The movement’s title pays homage to a similar sound played by Jethro Tull’s flutist Ian Anderson.) That challenging piece was a remarkable accomplishment for the CSO in the allotted rehearsal time.

Piccinini is an astounding talent, and this work is a showcase she’ll be playing for the rest of her career. It’s evident Kernis has beautiful ideas in his head that he feels compelled to share with us, rather than a composer with great orchestral skill, but no inspiration to drape them on.

Most complex contemporary works deserve more than one hearing to absorb their essence and, fortunately for those who attended and those who missed it, an excellent video of Piccinini’s premiere performance in Detroit is available online.

Falletta is also a champion of Kernis’ string piece “Musica Celestis,” which this reviewer heard when Falletta led the Chamber Orchestra of Philadelphia. (Born in a Philly suburb, Kernis had the honor of having his “Color Wheel” performed at the opening concert of the city’s Kimmel Center for the Performing Arts, home of the Philadelphia Orchestra since 2001.)

The program opened with the familiar “Romanian Rhapsody No. 1” by George Enescu. Like many fine composers like Dukas, Ibert and Holst, who are unfairly remembered for a single work, this popular piece (astonishingly written at age 19) has eclipsed the many symphonies, chamber works and one opera of this famed violinist and composer called the “greatest musical phenomenon since Mozart” by Pablo Casals.

But the piece, like his second Rhapsody, deserves its reputation. From its delicious solo wind passages before the first downbeat to the first theme (based on the folk tune “I want to spend my money on drink”), we encounter the second, slower melody, introduced in the violins, which turns into a swirling folk dance with brass outbursts. The work’s constantly accelerating buoyancy often hurtles to a dead stop as if needing to catch its breath, and the rhythmic string figures are well beyond the skill of any gypsy fiddlers. It’s a powerhouse, played Thursday evening with outstanding energy and propulsion.

Falletta said she chose to end the concert with Beethoven’s Symphony No. 6 because of Beethoven’s need to recharge in the Viennese countryside, and because Chautauqua Institution offers a similar experience of calmness and repose.

Beethoven inscribed the symphony Pastoral, one of the few musical titles during that era actually intended by a composer. Though he could no longer hear the bird calls or rustle of the trees, his depiction of the Vienna woods that he loved and the rare storytelling description of its peaceful setting has moved us for more than 200 years.

The fact that he composed it simultaneously while grappling with the overwhelming human struggles of the Fifth is truly humbling. But Falletta took its nickname seriously, unlike some recent interpreters who have souped it up like an afterthought of the mighty Fifth or a prequel to the powerful Seventh. Restraint was her instinct in caressing every phrase and graceful tempo of Beethoven’s bucolic respite. The jolly first movement and the Scene by the Brook, with its final bird calls, had supremely luscious wind playing.

The woodwind interplay was again impressive as the jolly folk celebrated in the woods, before the sudden storm and the grateful rejoicing of the villagers. The reviewer rejoiced too, through Falletta’s programming vision and the CSO’s splendid artistry in every section.