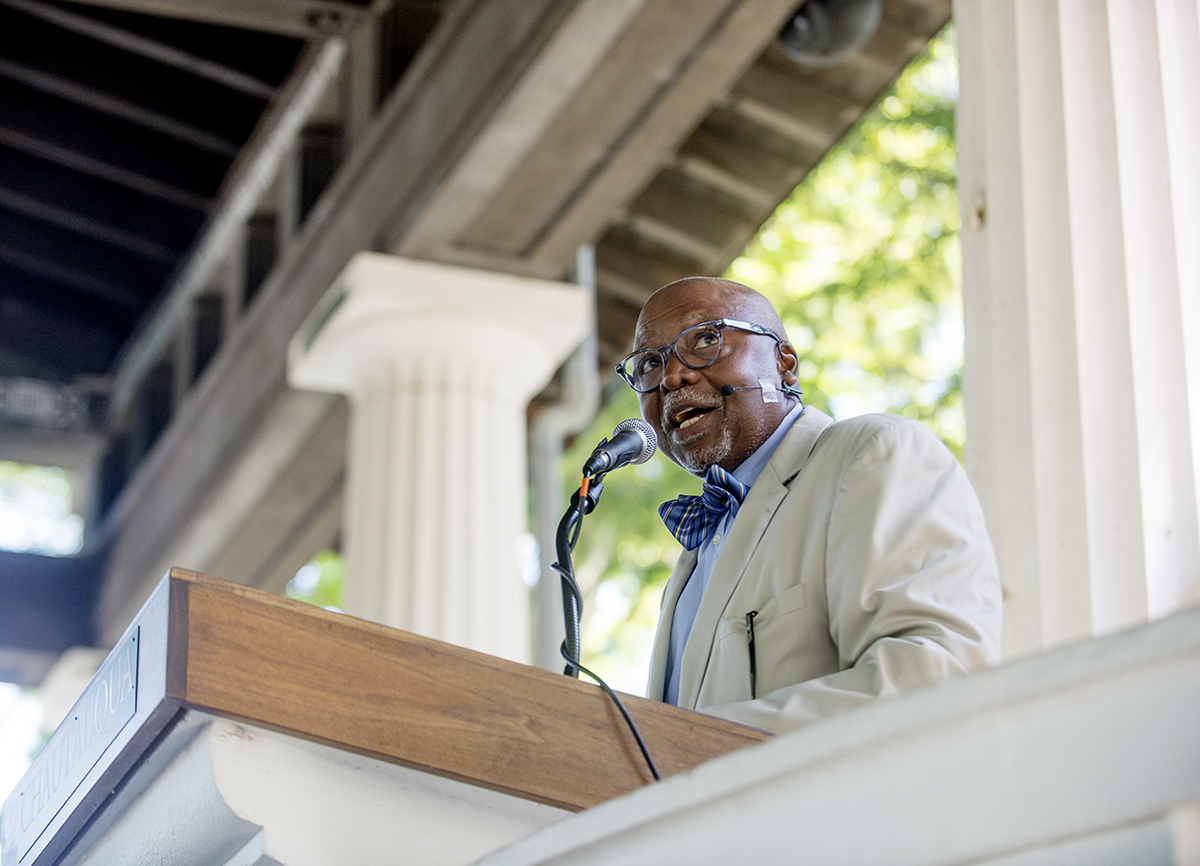 In a week dedicated to “America’s Spiritual Songbook,” one of the most potent messages is this: The history of American music is largely the history of black music.

From religious camp meetings on the western frontier to jazz and blues on the streets of New Orleans through modern day hip-hop and rap, America’s distinct sound was born out of the unique experience and cultural tradition of African-Americans before it was commercialized and exported across the country and then around the world.

But in mass-marketing and mass-producing music that grew out of a particular form of oppression, the Rev. James H. Evans Jr. warned, something important can be lost in translation.

Evans believes this is particularly true about the music of his youth — Motown. He tried to revive the significance of Motown that mass production diluted at the Hall of Philosophy Wednesday afternoon, boiling it down to a theme he said in many ways defines the black experience of the 1960s: ambivalence.

Evans is neither a scholar on race nor music. Rather, he is a child of 1960s Detroit who grew up seeing the Temptations and Stevie Wonder at the one-dollar concert venue down the street, and the son of a black minister who founded his ministry himself after becoming part of the Black Action Movement in college. In other words, he lived it.

“Motown and its music was, for many of us who were born and raised [in Detroit], simply part of [the] fabric of our daily lives,” Evans said. “The artists lived in our neighborhoods and went to our churches and schools.”

The reason for this is simple: Restrictive housing covenants prevented the black upper class from moving into wealthy white areas, even as those areas consumed their music. It’s part of the reason Motown was an ambivalent success for the black community, and it’s also why, Evans said, contrary to popular belief, the Motown sound and Motown Records could have only arisen in Detroit.

The common view that producer Berry Gordy single-handedly created Motown Records through his genius and could have done so anywhere, Evans said, reflects the narrative of American capitalism. It is also completely false, he said.

Instead, Evans said, Detroit became the birthplace of Motown because of the unique cultural lineage of blacks in Detroit. Oft-forgotten, the Midwest and the metropolitan nexus of Detroit, Oklahoma City and Chicago in particular, provided the most fertile ground for black cultural growth, from Toni Morrison’s prose to Richard Wright’s fiction.

“Oklahoma was a chaotic frontier which made room for flourishing of black imagination despite racism,” Evans said. “It is one of the least recognizable facts of African-American culture that the Midwest is responsible for most black popular music in American history.”

A critical part in that cultural production was the black church, Evans said, where Aretha Franklin, Alice Coltrane and others got their start. But music extended into the homes and schools as well, Evans said. Evans learned to play music on a school-provided clarinet before moving onto the saxophone, and took dance classes from an early age.

The blues arose when the culture of that frontier clashed with the monotonous reality of factory living. After Henry Ford announced he would start paying employees $5 per day in 1914, thousands of blacks moved north, only to find jobs weren’t as plentiful as they thought. The new genre helped them get through the depressing work they did find.

“While this music was means of solace and survival, the production of this music did not offer deliverance from the assembly line,” Evans said.

In founding Motown Records in 1959, Evans said, Gordy sought to replicate the assembly-line production method to making music. He did so with stunning success, Evans said, but it was an ambivalent victory for other black musicians: Gordy signed black artists for pennies on the dollar.

And when the civil rights movement took the national stage, Gordy’s commercial aspirations put constraints on his artists’ pursuit of racial justice, Evans said. Although Gordy believed that the spoken word could have selling power and recorded an early version of Martin Luther King Jr.’s “I Have A Dream” speech, Evans said, he refused to record the more radical Malcolm X. More critically, Evans said, he constrained what Motown artists could say about the movements sweeping the country.

When someone asked The Jackson 5 if they supported Black Power, Evans said, a representative of Motown stepped in and said the artists did not think of such matters.

But abstaining from politics did not spare the Motown artists or Detroit from the impact of the era’s racism, Evans said. After police raided and brutalized patrons of an African-American bar, racial unrest poured into the streets. Many accused Martha and the Vandellas for inciting it because they (wrongfully) thought the song “Dancing in the Streets,” was about rioting.

Thereafter, Motown artists began to return to the black church roots that Gordy had tried to expunge in his effort to popularize his music. They started speaking out for black power, both in their music in songs like Aretha Franklin’s “Respect,” and in the press.

Yet by this time, Gordy had set his sights on Hollywood. Motown would not survive in Detroit for this new age of artistic black empowerment.

“This rechurchufication of black popular music went hand in hand with emerging racial political consciousness,” Evans said. “Ironically however, this emerging social consciousness was not only a shining moment in the history of the country. It was also a sign of the beginning of the end for Motown.”