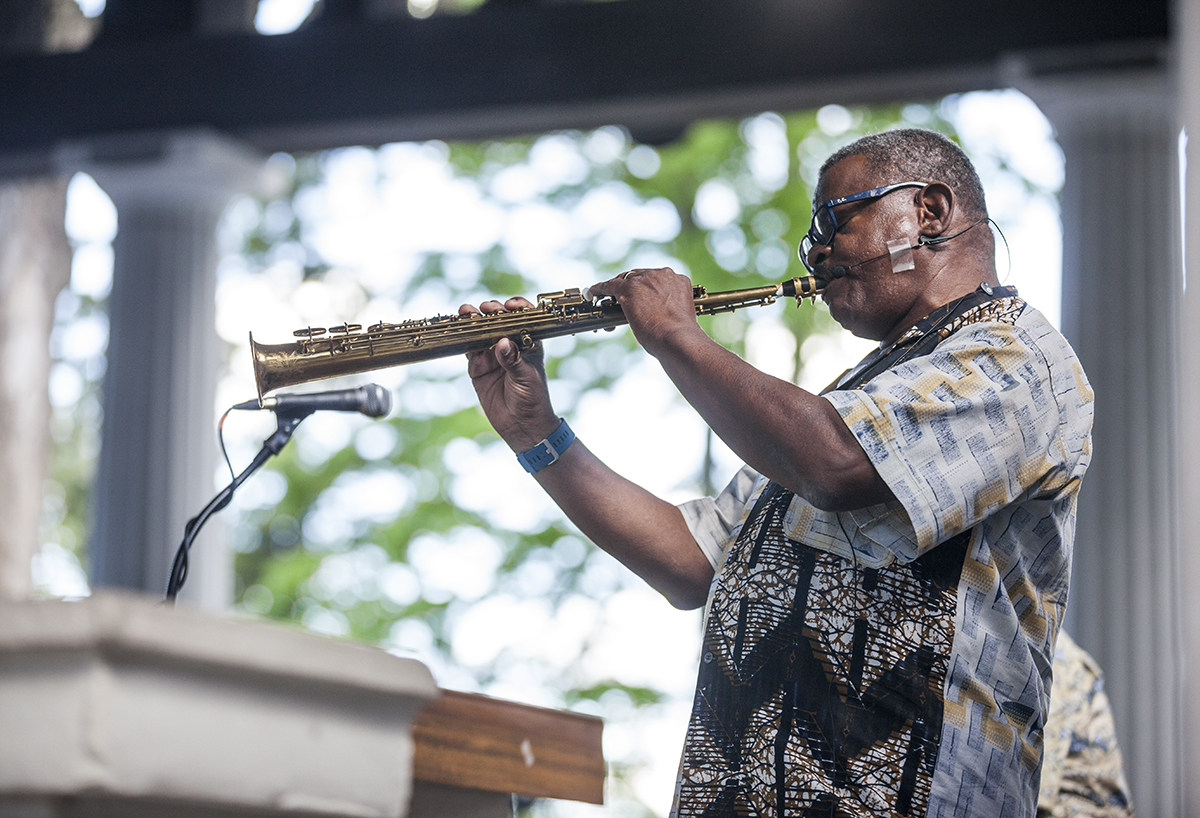 Before jazz became “high art,” before it was played in Carnegie Hall and the world’s finest concert venues — before it could be heard at the Amphitheater on Saturday evenings — it was renegade music.

Newly freed blacks pioneered the music on the streets of New Orleans, blending West African rhythms and slave spirituals using instruments bought on the shipyards. Preluding turn-of-the-21st-century criticisms of rap and hip-hop, many argued at the time jazz was uncouth, low- class and sinful.

In the first of a week of Interfaith Lectures on “America’s Spiritual Songbook,” the Rev. Dwight D. Andrews and Chautauqua’s organist and coordinator of worship and sacred music Jared Jacobsen explored how jazz, slave spirituals, West African pentatonic scales and European classical music blended to form the modern spiritual songbook.

“The American Songbook reflects ways the traditions blend and influence one another, everything bothered and shared,” said Andrews, senior minister of the First Congregational Church, UCC in Altlanta.

A professional musician and composer, Andrews led off the lecture with a concert. Holding up a gleaming brass soprano saxophone — a long instrument resembling a clarinet but with a wider mouth — Andrews played “Going Home,” an African-American spiritual based off Antonín Dvořák’s Symphony No. 9. Andrews said in its cross-cultural mix of folk and classical music, it embodies the eclectic nature of American hymns.

“The musical traditions have ping-ponged,” Andrews said. “Sometimes the origins are in folk music or a folk song, as in this spiritual, other times folk songs are transformed into orchestrals or longer symphonies.”

Andrews said he didn’t discover spirituals until graduate school, but was quickly hooked. Spirituals offered a window through time, he said, as spirituals played a fundamental role in not only black history, but American history.

Although for years Americans played only European classical music in concert halls, Andrews said, black music, with origins in West Africa and maintained throughout slavery, is what made the American sound distinctive. While European music uses a nine-note scale, West Africa used a five-note, pentatonic scale, Andrews said. Where classical musicians try to write every note into the nine-note line, in playing a pentatonic “Going Home,” Andrews said he had greater flexibility to take the music in the direction he wanted to.

Andrews said the pentatonic scale continues to permeate pop music. He played the 1930 jazz  song “I Got Rhythm” as an example, which the audience instantly recognized.

These five notes, Andrews said, preserved through slavery, emerged as the sound of the streets around the turn of the 20th century. Americans and Europeans embraced it, even as the new sound remained out of the high-art domain. He cited a 1921 magazine article that asked, “Does jazz put the sin in syncopation?” and warned that children who listen to jazz will run away from home and get pregnant.

“For a long time it was back-alley music. You would go to a club [to hear jazz], but you wouldn’t go to a concert hall because it was considered bad form,” Andrews said. “[Musicians] would go to Carnegie Hall and play a concert and then you would put on dark glasses and go to jazz club.”

It was not until 1938 that jazz was played in Carnegie Hall, when a white musician named Benny Goodman appeared with an integrated band in what became known as jazz’s “coming out” party.

Even today, Andrews said, people think of a divide between religious and secular music. Yet, many of the people performing in clubs on Saturday night are also playing Sunday morning, just a different melody. Early Aretha Franklin records sound like both gospel and R&B music because Franklin learned to sing in the church.

Andrews and Jacobsen, playing the piano, finished their discussion by performing a couple spirituals and inviting the audience to rise and join them. They sang “Go Down Moses,” a spiritual song that connected the condition of black slaves in America to the Israelite slaves in Egypt.

“I’m fascinated that spirituals exist at all,” Andrews said. “Isn’t it mighty that these songs of affirmation, of salvation, came out of experience we can’t even imagine?”