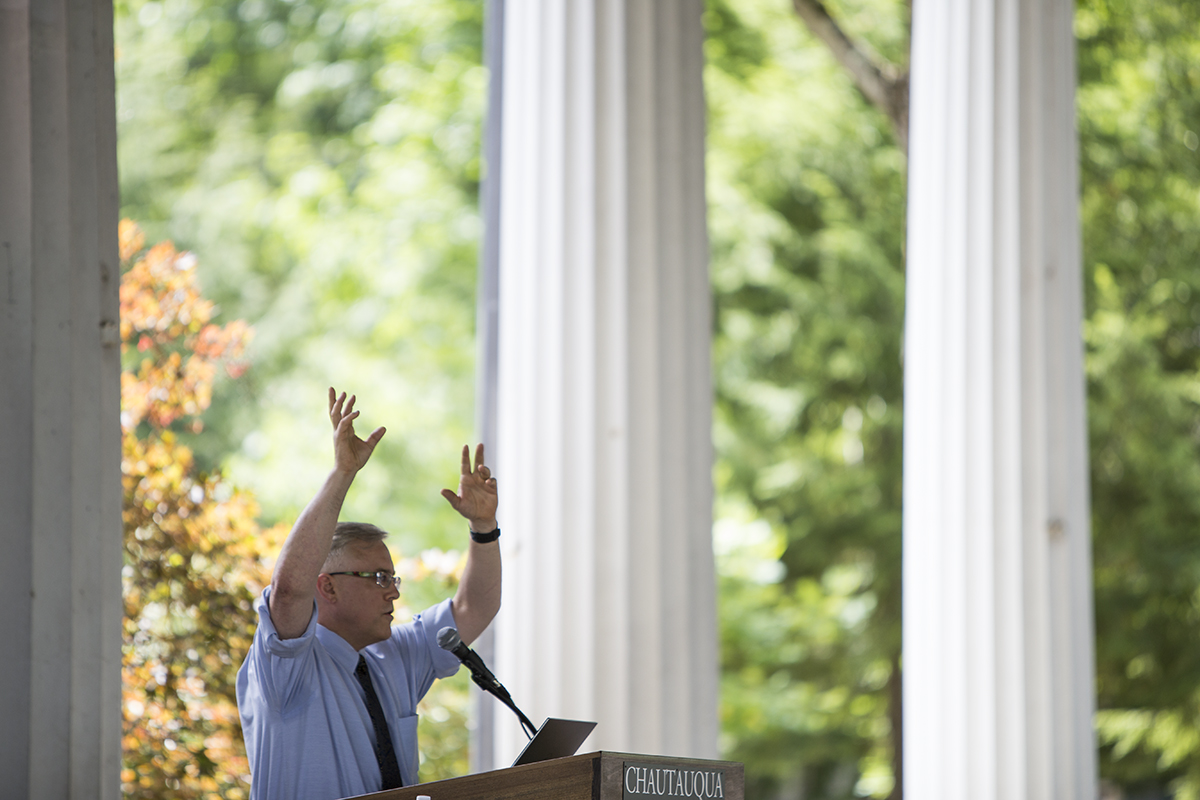 One major religious sect is already embracing the next era of human evolution.

Since 2006, the Mormon Transhumanist Association has brought hundreds of Mormons together to discuss how technology can catapult man into an unprecedented age of power and immortality.

Because of that, James “J.” Hughes believes Mormons are ahead of the religious curve. At the Hall of Philosophy Tuesday afternoon, he called for greater cooperation between religion and transhumanist science to help the Abrahamic faiths embrace the coming technological age and help secular scientists grapple with the ancient ethical and theological questions this new era will provoke.

A child of the Unitarian church who served briefly as a Buddhist monk before deciding he wanted a family, Hughes later became executive director of the world’s largest transhumanist organization, Humanity+, making him almost uniquely qualified for his current job. He’s the founding executive director of the Institute for Ethics and Emerging Technologies, a think tank dedicated to exploring ethical and social implications of new and transhumanist technologies. They describe themselves as “technoprogressive.”

Only problem: Many religions, particularly the Abrahamic ones, are rejecting the technologies outright without discussing the ethics. Many Mormons’ embrace of transhumanism stems from Joseph Smith’s teaching, “You have got to learn how to be gods yourself.” That is not metaphorical. In the same speech, Smith talks about gradually improving until humans rise from the dead.

But in a Pew Research Center survey released last month, 60 to 65 percent of those “highly committed” to religion opposed the three transhumanist technologies Pew put forth: gene-editing to prevent disease in babies, brain chips to improve cognitive ability and synthetic blood to improve physical performance. Evangelicals scored the highest rate of opposition.

Some who opposed said such technology was playing God and breaking divine limits, or they were unsure it was safe. Hughes said he could respect and have a serious conversation about that. Others said it was “the mark of the beast” from Revelations. Hughes said he couldn’t have a serious conversation about that, but, eventually, he might not need to.

“As people of faith grapple with new emerging technology, they begin to go through fairly predictable trajectories,” Hughes said. “It used to be that autopsies were seen as violating God’s plan for the dead; blood transfusion; organ transplants; vaccination, breast reconstruction. … I think this is the trajectory we’re on, but I think we need to have a conversation because both sides could learn something.”

Hughes started with metaphysics. He quoted John Locke, who posited that after death, God only needs to bring back the memories of a person to judge them. That is the beginning of personhood theory, Hughes said, the idea that the essential essence of a human is their memories rather than the traditional religious idea of a soul separate from the body.

“For us, what constitutes personhood is having that kind of mind that can carry that kind of subjectivity,” Hughes said. “And that’s very different understanding from believing in that soul.”

As transhumanists consider uploading memories into a computer or giving people robot bodies, Hughes said, the question of what defines a human being takes on greater importance. Some traditions hold the body is a temple, others a meaningless vessel. Metaphysics also includes the question of whether humans can become like God. Smith’s prophecy is heresy to most Judeo-Christian traditions. Ultimately, Hughes said, much of religious metaphysics deal with essential constants in humanity, constants that – with new technologies – suddenly becoming variables.

“Faith traditions give us grace to accept what cannot be changed, but we have a whole lot of things today that can be changed and we need courage to consider it,” Hughes said.

Hughes turned to eschatology and invoked the argument — most recently proposed in a high-profile way by Elon Musk — that the entire universe is a simulation. The argument goes like this: At least one transhumanist view of the end times is a universe filled with intelligence to the point that humans use black holes to power computer simulations of other universes. If an advanced civilization can develop such technology, what are the odds that humans are that civilization or that we are one of the many simulations run by a more developed one?

Considering that possibility, Hughes said, transhumanists begin to speculate if the civilization controlling the simulation is benevolent and if it intervenes in the universe. Those are theological questions, Hughes said, and scientists should look to religion to help reach an answer.

“My secular friends who end in those kind of head experiments … have no idea that Bishop Berkeley thought of the same thing 400 years ago,” Hughes said.

Finally, soteriology asks: What does it mean for humans to be transcendent, or rather, “What is the highest form of human existence?”

Transhumanists believe people will soon have little nanobots or other technology in their heads that can make them happy all the time, Hughes said, but do people want to be lying in a blissful gutter? And so transhumanists start to contemplate what is the best possible existence and the relationship between reason and love and between compassion and wisdom, the same thoughts that consumed the Buddha and other ancient mystics more than 2,000 years ago.

Already, scientists have developed pills that make humans happy or less likely to commit crimes, Hughes said, things such as oxytocin and ADHD pills. He wondered if future pills that can make people smarter and society more moral should be mandatory. No, Hughes concluded; ultimately, cognitive liberty has to be paramount.

“Human enhancers need to grapple with people of faith because we have a lot to learn about these countless years of reflecting on what it means to be a good life,” Hughes said. “And I think people think … we need to be grappling with what these new neuroscience revelations have for the religious tradition.”