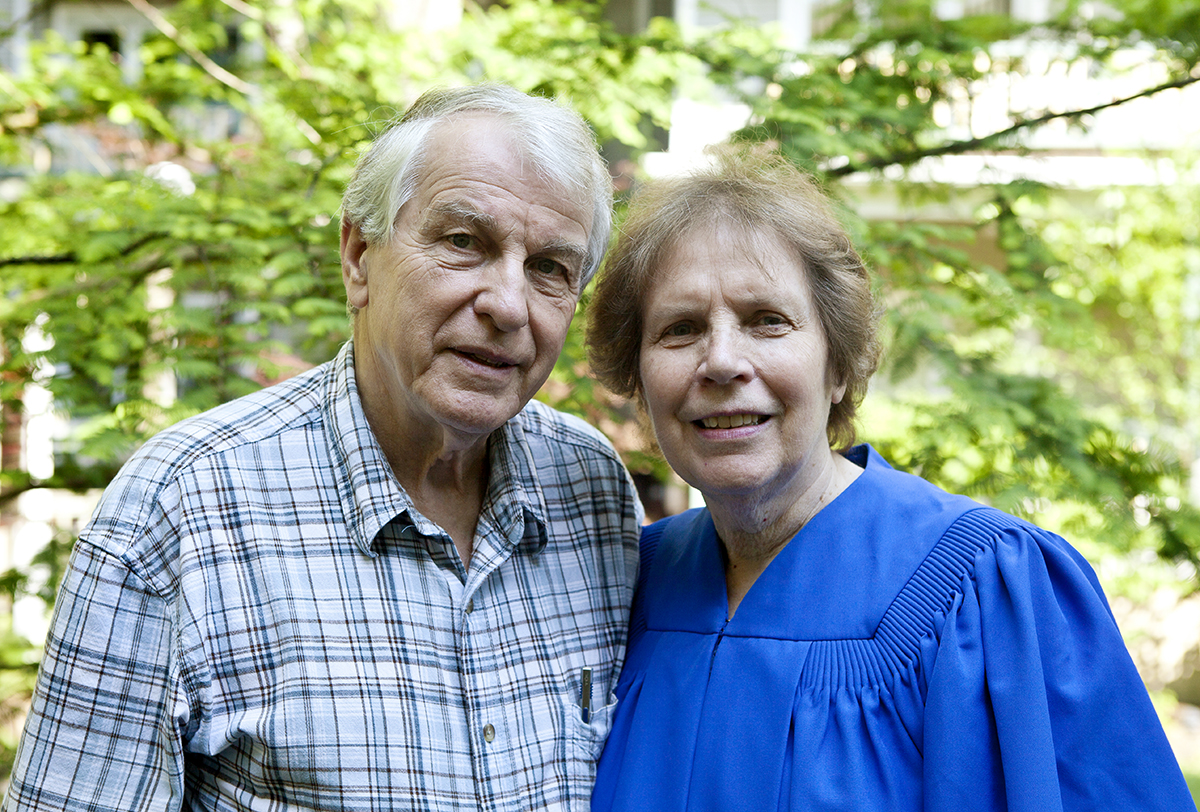 Already members of the Eleanor B. Daugherty Society, the Jurellers decided, in addition to their initial gift to the Chautauqua Foundation, to create an endowment fund specifically suited for the Department of Religion and the enhancement of interfaith understanding.

As they enjoy their 25th summer here at Chautauqua Institution, all is well. Four generations deep, with five children, 12 grandchildren and one great-grandchild, the Jurellers first planted the seed of their ever-growing Chautauqua legacy when their daughter went to an orchestra camp at SUNY Fredonia. Electing not to drive back to Syracuse, they instead chose to spend their weekend at the Institution.

The rest was history.

“We really love the place. It’s inspiring and wonderfully mind-expanding,” said John, an alum of Syracuse University and retired engineer at General Electric. “It’s peaceful in that you can get your mind on something else that’s good for your psyche.”

Faithful attendees of the morning and afternoon lectures, the Jurellers also indulge in the symphony and dance programs. With little interest for golf or tennis, John and Mary would prefer biking down to University Beach on hot, sultry days and swimming in the lake. Having tempered their activity schedule in recent years, they find pleasure and solace in bringing their grandchildren down for a quick splash at Children’s Beach.

But what’s really caught the inquisitive eyes of Mary and John Jureller is the implementation of interfaith efforts, such as the Abrahamic Program for Young Adults.

In a community originally founded and focused on Protestant ideals, as the Jurellers see it, the broadening and inclusion of other religions is requisite to the Chautauqua and human experience. They hope in encouraging those open conversations, it’ll help to alleviate  prejudices.

A retired professor of philosophy at Le Moyne College, Mary has a specialty in religion. She said living in a post-9/11 society, parochial thought and pernicious treatment — usually directed toward Islam — has become an unfortunate mainstay in the Western culture. In addressing the three major monotheistic religions, Judaism, Christianity and Islam, Mary emphasized how one must handle the theologies in relation to one another. The similarities and intersections among the three are far from uncanny, all sprouted from the same kernel in the desert sands of the Middle East more than 5,000 years ago. The Jurellers hope their contribution will help facilitate programs for people to understand a faith other than their own and avoid myopic outlooks and blatant dismissals.

That logic, in turn, is applied toward Islam.

“We’ve got so many people who don’t know anything, or what they know about Islam is so distorted, so limited that they could think what they talk about now of radical Islamic terrorism as being somehow integral to Islam, which it isn’t,” Mary said.

The Jurellers said they can already see such effective interfaith programs such as the Abrahamic conversations and the public Jum’ah services every Friday succeeding in deconstructing “abominable ignorance.”

“It’s just wonderful in helping people to break down their prejudices,” Mary said. “That’s what’s going to lead to world peace. Much more than anything else, it’s going to be understanding people of different backgrounds.”

The Jurellers saw similar execution of that civil discourse exemplified in spades by Chautauqua Institution during the recnt community dialogue concerning the reconstruction of the Amphitheater.

Mary, going on more than 20 years as a singer in the Chautauqua Choir and also a member of the Motet Choir, was dismayed at the state of disrepair the Amphitheater had fallen into. John, who attends every one of Mary’s performances, shared in the sentiment.

While backlash mounted from some Chautauquans, Mary observed firsthand as Chautauqua Institution President Tom Becker and the board of trustees took their concerns into serious account.

Normally rehearsing with her choir at the back house of the Amphitheater every week, Mary instead watched as those rehearsal times were impeded by educational tours by the Institution for those people skeptical of the Amphitheater’s integral status.

“Tom Becker, in particular, was so patient,” Mary said. “He never responded in [anything less than a] perfectly respectful way. The whole approach the Institution took toward this controversy over the Amphitheater was walking the walk and not just talking the talk of civility and mutual understanding. Being willing to listen to opinions that were different from your own. The Institution just modeled over and over again how to handle controversy, and how to handle criticism that’s pointed right at you. They were phenomenal.”

When describing Chautauqua Institution in its entirety, words that floated to the surface of the Jurellers’ thoughts were: challenging, exhilarating, comforting and peaceful.

To Mary and John, the versatile dialogue that is Chautauqua is truly something special.

“You can talk to anybody about anything,” Mary said. “There’s not too many places you can do that.”

For information on how you can become a member of the Eleanor B. Daugherty Society, please contact Dustin Nelson, director of gift planning, at 716-357-6409 or dnelson@ciweb.org.