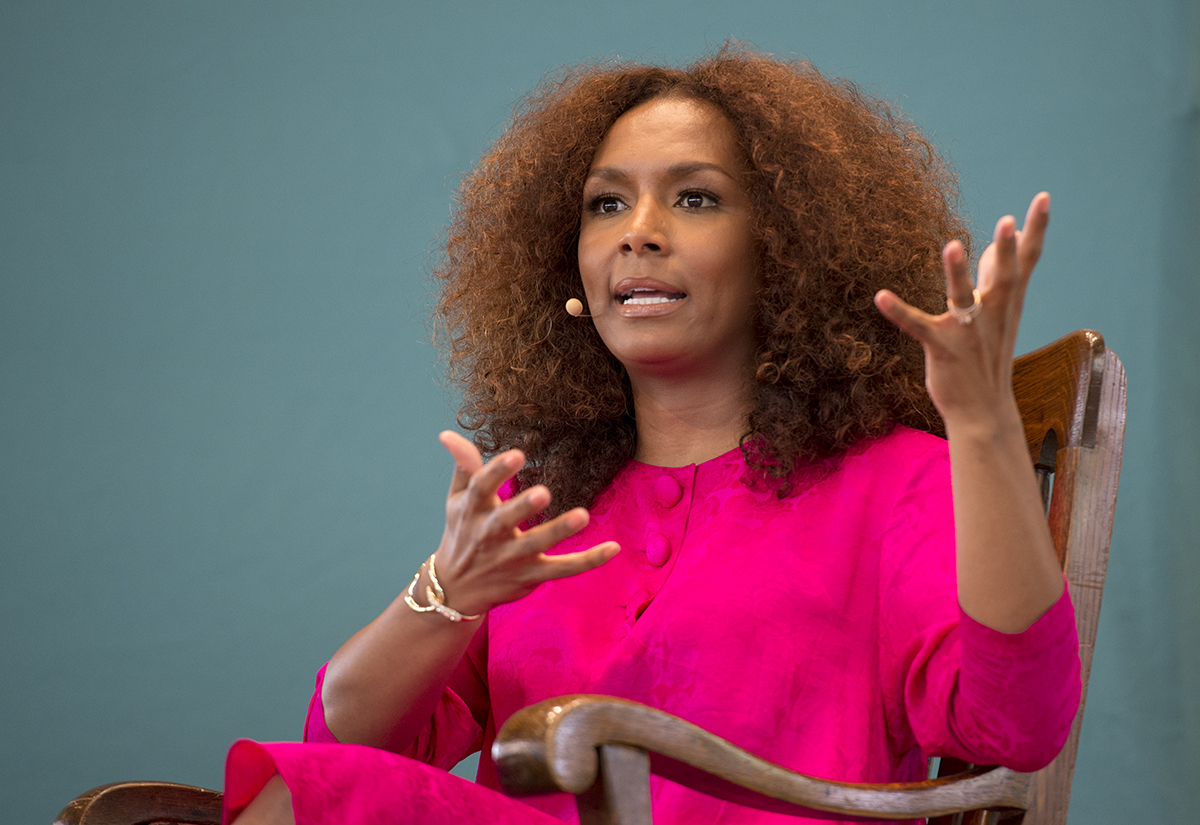 Janet Mock came out as a transgender woman in May 2011 by sharing her story in a Marie Claire article. She wrote about her transition to womanhood during her teenage years and how it felt to be born again as a female after sexual reassignment surgery.

Mock, a gender rights activist and author of Redefining Realness: My Path to Womanhood, Identity, Love & So Much More, spoke with Monica Roberts, founding editor of the blog “TransGriot,” in an onstage conversation Thursday morning in the Amphitheater about their personal experiences as transgender women of color and the future of the transgender movement.

“I think the reason why I went into journalism is because I had an interest and a curiosity about the world and writing, but, at the same time, it was a way for me to hide behind other people’s stories,” Mock said. “I was at a point where I felt it was time to step forward and tell my own story.”

Mock transitioned as a teenager in Honolulu in a poor, black community. When she decided to attend graduate school in New York City, she did not want to tell everyone she was a transgender woman.

“It’s not necessarily something you’d put on a grad school application or your resume, but I think I came to the point where I was kind of tired of the silence,” Mock said. “I wanted to step forward and tell a different kind of story, and I think the story I told, of course, had intersections with race and gender. “

However, Mock said her transition was easier because of where she grew up. Mock lived in Dallas as a young child before moving to Honolulu where her mother was a native. Mock said she wouldn’t be the woman she is today if she had continued growing up in Dallas.

When she moved to Honolulu, she was introduced to a subculture in her community call Māhū, a term that represents people who don’t conform to typical gender roles. With that understanding of transgender people already ingrained in Hawaiian culture, Mock found it easier to transition.

“I don’t think I would have felt comfortable enough to express and to say and to be myself in a culture that so often mandates that if you’re born with certain body parts that you aren’t allowed to express who you truly are if that expression doesn’t align with our cultured definition of what is deemed normal,” Mock said. “Having this culture that, at the basic level, at least tolerated my gender nonconformity, I was able to blossom, and I was able to be.”

Mock said she knew people who were transgender in her everyday life. Her seventh-grade dance teacher in middle school was a transgender woman. Seeing those examples in her community as she grew up and transitioned to a young woman showed Mock she is valued.

“I had people that I saw every day who were not being vilified, who were not being demeaned,” Mock said. “I think that growing up in a culture that had space to say that you belong here, and that we’re not going to just tolerate you, we’re going to include you in the fabric.”

As an adult, Roberts worked in an airport for seven years before transitioning in 1994. She continued working at the airlines for seven more years.

“While the culture was starting to evolve, we were still not close to where we are now,” Roberts said. “At that time, we had very few cities or states that had nondiscrimination laws in the book. There wasn’t the level of protection that we have at this point and time in 2016.”

“You shouldn’t have to leave the borders of New York state, if you live here, to have your human rights code,” Roberts said.

Mock and Roberts also discussed the role of trans people in the media. Roberts said her first memory of a trans woman role in a television show was in an episode titled “Once A Friend” from the fourth season of “The Jeffersons.”

In the episode, George Jefferson goes to meet up with his old friend from the Navy. His friend Eddie transitioned to “Edie” and now identified and dressed as a woman. Roberts called the episode groundbreaking because it was a positive role portraying trans women.

Mock said she doesn’t mind when cisgender actors play trans roles as long as they play the role in knowledgeable and sensitive ways, but she does mind that trans actors do not get the chance to play cisgender roles.

Both women agreed on the importance of transgender figures in the media such as Caitlyn Jenner and Laverne Cox. Roberts said she never would have imagined Jenner, a gold medal-winning decathlete, being pictured as a trans woman on the cover of Vanity Fair 40 years later.

Mock said Jenner’s presence as a transgender figure impacts not just the United States. She said when she visited Kenya for an activist convention she was surprised to learn they knew about Jenner.

“I thought, ‘This is an American figure. There’s no way that this is going to hit here,’” Mock said. “Their understanding of Caitlyn Jenner was through the global juggernaut of this Kardashian family, which I did not know was a global thing.”

Because of Jenner’s public presence, the LGBT activists Mock met with in Kenya were asked to share their experiences, and Mock was giving them media advice and training them on how to tell their own trans stories.

Roberts said the power of the media and pop culture flows deeper than what people would expect. She compared the transgender movement to the black rights movement in the ’60s. Roberts shared a story about Nichelle Nichols’ role in the television show “Star Trek.”

Nichols thought about quitting the show, according to Roberts, but was persuaded not to after Martin Luther King Jr. told Nichols she’s one of few black actors to play a role outside of typical black stereotypes. She also played a role where black and white worked together, something activists were working toward.

“Those pop culture shows, while they may seem insignificant, you don’t know what they will inspire someone to do,” Roberts said.

“At the end of the day, we are part of the diverse mosaic of human life,” Roberts said. “When you deny us the ability to develop our talents and our skills to the best of our ability, you’re not only hurting that trans person, you’re hurting our society as a whole.”