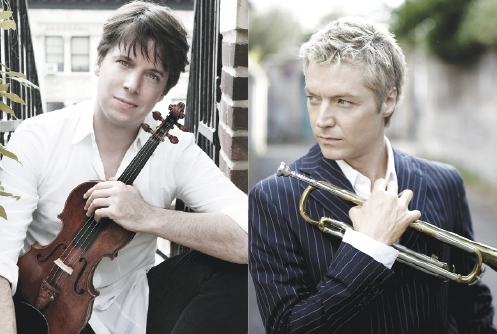 Chris Botti and Joshua Bell have been touring and performing all summer, but Botti said their performance at Chautauqua Institution will be one of the highlights of their tour.

Botti and Bell will perform with the Chautauqua Symphony Orchestra, under the baton of guest conductor Maxim Eshkenazy, at 8:15 p.m. August 13 in the Amphitheater. The performance is presented as a collaboration between the CSO and Chautauqua’s summer popular entertainment series.

Botti and Bell are both Grammy-winning musicians. Botti’s most recent album is Impressions, released in 2012, and Bell has an upcoming album with Steven Isserlis called For the Love of Brahms, set to be released in the fall.

This is Botti and Bell’s first tour together, despite knowing each other for a long time, Botti said.

“We’d been talking about it off and on, like, ‘Why aren’t we doing a little tour or something like that?’ ” Botti said. “So finally this year, it’s come to happen and it came out so good, so we’re hopefully looking to do much more.”

Their tour has taken them across the United States, presenting opportunities to collaborate with different groups of musicians — groups such as the CSO. It’s an experience Botti values, he said. “I’m an artist who’s generally made my livelihood, in many ways, by collaborating with people, whether it’s Bocelli, Sting, Yo-Yo Ma, whoever,” Botti said. “I love that feeling of camaraderie and collaboration.”

Botti said the audience at Chautauqua can expect a certain level of musicianship — from himself, Bell, their band members and the CSO — as well as a varied repertoire.

“I think the audience is going to see, certainly, a variety of music that you can’t see from any other band out there today, any other concert out there today — the way it moves from classical to jazz to R&B to rock,” Botti said.

He said Bell will open the show with about 45 minutes of chamber music, and then they’ll move into a few duets. There’s also a special piece written specifically for Bell by the composer Rob Mathes that will close the show, which Botti said he’s excited about.

“It’s really like a many-pronged attack: Let’s try to hit the audience in a positive way, to try to show them how different this show is from anything else that’s going on in music today,” Botti said.

Botti said despite his successful career as a classical musician, he’s never had a hit song that’s defined him. His career has been built on word of mouth, he said, something that has become apparent over the years he’s been performing.

A recent example of that: Botti and Bell played to a crowd of 8,000 at Red Rocks Amphitheatre in Morrison, Colorado, near Denver. Botti said seeing that number of people and hearing their surprised reactions to their performances makes what they do special.

“That’s really fun for me to hear, and that’s why we keep doing it,” Botti said.