Doctor Herb — Dr. Herbert H. Keyser — is renowned for his joyful approach to fundraising for the Chautauqua Foundation and the Chautauqua Women’s Club. 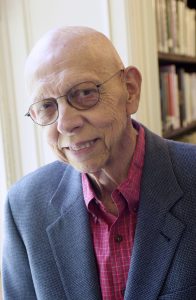 Keyser’s handmade lemon tarts and chocolate treats are available every Monday after the Amphitheater lecture, as well as during Old First Night. His tarts are the focus of his 2005 book, A Chautauquan Searches Paris for the Best Tarte au Citron. He has contributed all of the proceeds from this book and his confections — nearly $55,000 thus far — to the Chautauqua Fund.

Joined by soprano Bett Butler, Keyser has entertained Chautauquans by combining his homemade desserts with stories of and songs from the American musical theater, based on his show business experience as a young adult during the 1950s and his 2009 anthology, Geniuses of the American Musical Theatre: The Composers and Lyricists. The money generated from ticket sales benefited the CWC fund for scholarships for fine and performing arts students.

Elsewhere, however, Keyser is better known for his medical abilities and for continually raising flags about serious deficiencies in the United States health care system.

At 1 p.m. Monday at the CWC House, Keyser will give a talk titled “How a Series of Setbacks Over Many Decades Led to the Writing of This Book, or, Oh My Gosh, It’s Done (An Unquiet Life: Odyssey of a Medical Whistleblower).”

“I’ve always been a writer,” Keyser said. “This is my sixth book and first novel, which started more than 30 years ago. It was intended to be nonfiction. I did research around the country and found a huge number of doctors whose lives were destroyed because they were whistleblowers. It’s probably not dissimilar to whistleblowers in corporations.”

There are no whistleblowers, Keyser said, who come out with great lives.

“They suffer,” he said. “I was among that group at that time. I’m unbelievably fortunate to have been able to find my way through that harassment. For me, there’s not the expectation of accumulating any wealth; few writers do. I want people to understand what goes on in the world of medicine.”

Keyser’s latest book was just released this summer. He said that it’s got humor and is supposed to be a thriller.

“As required in every novel, it also has sex,” he said.

Keyser’s mother and father wanted him to be a doctor; he wanted to go into show business.

“After five or six years of little success, I got accepted into medical school,” he said. “I was always a good student.”

Keyser went to Hahnemann Medical College in Philadelphia, then on to a five year Ob-Gyn residency in New York City.

Before and after he was drafted during the Vietnam War, Keyser practiced medicine in New York. During 1968 and 1969 he was drafted out of private practice to serve as a lieutenant colonel in the U.S. Army Medical Corps in Georgia where he delivered babies. He said his number of years out of medical school determined his rank.

“I loved being in Georgia,” Keyser said. “As a high-ranking officer, I was required to actively participate in the community. I was the commissioner of Little League bowling and basketball. I even taught a free course, family life education, in their local school system.”

Because the work wasn’t hard, he said he also conducted research and wrote and co-authored articles published in medical journals and textbook chapters.

All the while, the husbands of Keyser’s patients were being trained as helicopter and reconnaissance pilots and sent off to Vietnam. He said so many of those pilots died, and so quickly, that many of the young women he cared for were widows.

“I became very radicalized,” Keyser said. “I spent the next few years in the anti-war movement on Long Island.”

He became the New York state chair of physicians and dentists for George McGovern and Congressman Allard Lowenstein. According to Keyser, Lowenstein was probably the most active congressman fighting against the war.

Keyser was in private practice as a primary obstetrician for a total of 25 years in New York, where he co-chaired the ob-gyn department of one of Long Island’s largest hospitals, and in San Antonio where he moved after falling in love with his wife, Barbara, and where they raised six children.

“I was doing OB and some GYN, in the middle of the night and whenever. I was fighting the medical community for so many years, it became not worth it,” he said. “During that time, I wrote books and appeared on TV and radio about what was going wrong with ob-gyn medicine.”

The books Keyser wrote during those years are 1984’s Women Under the Knife: A Gynecologist’s Report on Hazardous Medicine and Prescription for Disaster: Health Care in America, published in 1993. The late U.S. Surgeon General C. Everett Koop and the late Minnesota Senator Paul Wellstone each wrote a foreword to his latter book.

Following their publication, Keyser made appearances on “Nightline” with Ted Koppel, “Regis Philbin’s Lifestyles,” CNN and an HBO special. Additionally, he appeared on many local TV and radio programs.

Keyser said he then spent another 25 years tending to impoverished pregnant women, including Native American and migrant workers. He traveled throughout the U.S., practicing in small communities in need of an obstetrician. He also served as an expert witness in medical malpractice trials.

At age 79, Keyser retired from medicine — “because my wife told me it was time” — and launched the second act of his show business career, this time traveling the world as an aficionado and authority in American musical theater. After the season ends, he will fly to Lisbon, Portugal, to board a cruise ship and cross the Atlantic regaling passengers with lectures, stories and songs.