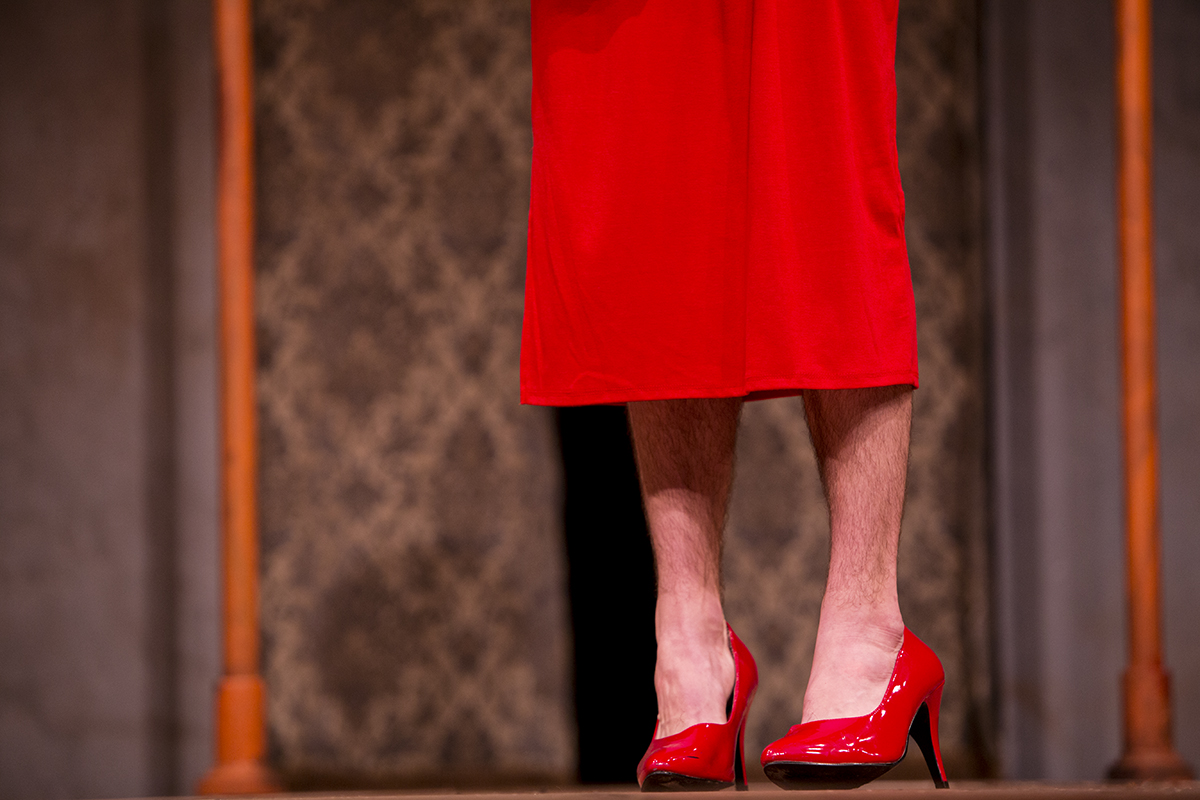 With all the talk about stopped clocks and their being right twice a day, what about clocks whose hands spin wildly? They must also sail past the correct time now and then, right?

The image sprung to mind when Andrew Borba’s frenetic staging of The Taming of the Shrew touched down on a recognizable emotion or a touching shift in perspective or even just a clever gag. Then it was off to the races again, with the ever-contentious sexual politics of Petruchio and his seemingly untameable Kate gaining little traction along the way.

Which is not to say gender isn’t on Borba’s mind. Far from it. Rather than follow the currently fashionable route of fielding an all-male or all-female Shrew cast, he has here reversed the genders across the board. And so Anna Tullis has taken on the swaggering Petruchio, opposite of Kate in Andrew Richardson who is a full head taller than she is.

There is precedent for that sort of approach. Peter Sellars cast Patrick Stewart in the title role of an acclaimed 1997 Othello in which the entire rest of the cast was African-American. More recently, a reverse-gender live reading of the “American Pie” screenplay prompted one of the male actors to flip through the script and — for the first time — bemoan the quality of the women’s parts.

But Borba lurches his way into the conception with a framing device that doubles down on the idea that the action is all part of a performance being staged for an addled sot named Christopher Sly. Here we first meet Richardson as Sly, a sexual predator who is regular at a modern-day Hooters-esque honkytonk called Stags. (Tom Buderwitz’s quick-change set design glides from Stags to Padua with impressive ease.) The hostess of the establishment punishes the unconscious Sly not only by staging the ensuing action, but by casting him as Kate — and one of the waitresses he had just manhandled as his tamer.

And yes, there is something invigorating about seeing a character who starts out harassing women and worse become chastened, even scarred, by the action that follows. But it also hollows out much of the play’s pathos. It becomes a sort of revenger’s comedy, which is satisfying but also limiting.

In its place, we find … well, an awful lot of silly accents and sight gags and other grabs at laughs. Far too many of those go nowhere, and several of them go nowhere repeatedly. During some of the more undisciplined passages, the sensation can be like opening the door to a car and being trampled by a parade of exiting clowns.

Tullis and Richardson each chisel out a few insightful moments amid the hullabaloo, as do a handful of supporting players. Caroline Siewert is a particularly welcome calming presence as Lucentio, who ends up with Kate’s more marriageable younger sister, and David Samuel makes a memorable late impression as one of the wives pitted against the newly subjugated Kate in a particularly (and intentionally) squirm-inducing contest among the menfolk.

Here and throughout The Taming of the Shrew, the dozen or so people on stage appeared to be having a great time. A little more discipline might have resulted in that sense of enjoyment consistently crossing over to the other side of the footlights.