Meet the Legendary Leader of the Green Mountain Boys 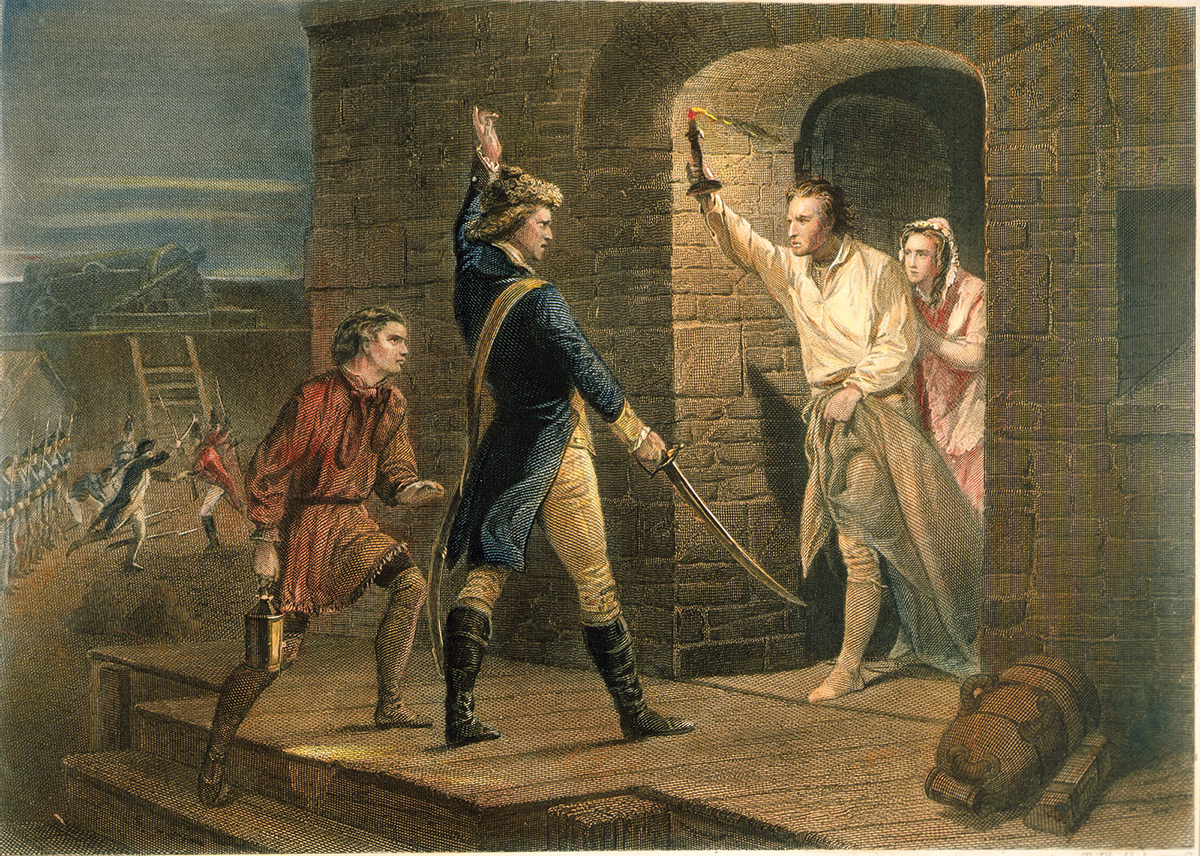 “In the name of the great Jehovah and the Continental Congress!”

That’s what Ethan Allen thundered at Lieutenant Jocelyn Feltham, second in command of the British troops of Fort Ticonderoga, when  Feltham (who was literally caught with his pants down) asked under whose authority Allen was seizing the fort at dawn on May 10, 1775.

That iconic scene, which has been passed down for generations in histories, biographies and novels and is still retold today by guides at the historic redoubt on Lake Champlain, may never have happened, according to the historian H. Nicholas Muller, the author, along with John J. Duffy, of Inventing Ethan Allen.

In fact, what we know about Allen, the leader of the Green Mountain Boys and the father of Vermont, may be disingenuous at best, if not outright balderdash.

That’s what Muller will argue in a lecture at 3:30 p.m. today at the Hall of Christ as part of the Oliver Archives Heritage Lecture Series. A longtime professor of history at the University of Vermont, former president of Colby-Sawyer College in New Hampshire and past director of the Wisconsin Historical Society, Muller has written more than 60 articles and books, as well as hundreds of newspaper columns about Vermont history.

The thesis of Inventing Ethan Allen is that, although Allen was well known and regarded in his lifetime, he became an American legend only after worshipful portrayals of him were published in the 1830s. The first biography of Allen in 1834 by Jared Sparks, the president of Harvard, was a best-seller that catapulted Allen into the pantheon of Revolutionary War heroes. A subsequent novel, The Green Mountain Boys by Daniel P. Thompson, further lionized Allen’s exploits, a wildly successful account that has been required reading for generations of New England schoolchildren. Statues and monuments were built to honor Allen. A furniture company was named for him. Ben & Jerry’s created an ice cream flavor called Ethan Almond to celebrate the opening of the Ethan Allen Homestead Museum in Burlington, Vermont.

Allen was born in Litchfield, Connecticut, and moved to what is now Vermont (then called the New Hampshire Grants) in 1738. He first came to prominence in the early 1770s as an opponent of New York State’s takeover and taxing of land that he and others had settled there. After arguing unsuccessfully before the New York Supreme Court on behalf of the early Vermont settlers, he founded and led the Green Mountain Boys, a vigilante group whose purpose was to resist the state’s laws and to scare away surveyors and new settlers. During that period, he also acquired large tracts of land as far north as Burlington.

At the beginning of the American Revolution, Allen led the Green Mountain Boys, along with a company of rebels commanded by Benedict Arnold, on a mission to capture Fort Ticonderoga. The fort, on the southern end of Lake Champlain, had been a strategic outpost since the French and Indian War and exchanged hands between the French and British twice during that war.

By 1775, it was dilapidated and manned by a skeleton crew of about 50 British soldiers and their families. But it was also a storehouse for cannons and weapons. Allen and his men rowed across from Vermont and overtook the sentries at dawn on May 10. The cannon seized was hauled to Boston, where it was crucial to lifting the British Navy’s blockade of that city.

Early that August and September, Allen led a force of Americans and Native Canadians in an ill-fated assault on Montreal. He was captured and held captive by the British until his release in prisoner exchange. He briefly joined George Washington at Valley Forge before returning home to Vermont, where he wrote political pamphlets, autobiographical accounts and a polemic called “Reason: the Only Oracle of Man.” He also worked with his brother, Ira, to establish an independent state, and may have tried to strike a deal to have Vermont become part of Canada. He died at 51 in 1789. Vermont was admitted to the Union as the 14th state in 1791.

Those are the facts. Over the years, embellishments built up to create the modern myth of Allen took firm hold, Muller and Duffy contend.

They say, contrary to legend, Allen was not much of a military commander, given his foolhardy incursion into Canada and the lack of effort by the outnumbered British to defend Ticonderoga. They suggest Allen was not personally loyal to his own Green Mountain Boys, a band known authorities at the time as the “Bennington mob.” The statesmanship and accomplishments attributed to Allen in helping to establish Vermont have been vastly overblown, as Allen was in captivity through the most meaningful negotiations, Muller and Duffy write. They provide evidence that Allen plagiarized his book and that he may have been a slaveholder and a murderer.

Perhaps most damning, they say when the Continental Congress balked at admitting Vermont as a state and New York State contested the land rights of the settlers, Allen tried to negotiate an agreement for Vermont to rejoin the British after the Revolutionary War.

Whether hero, villain or just a flawed human being, Allen remains a fascinating character, caught up in the events of his time and very much a part of that time. He lives on in the American imagination, regardless.

Psychiatrist to Explain Difference Between Moral Injury and PTSD