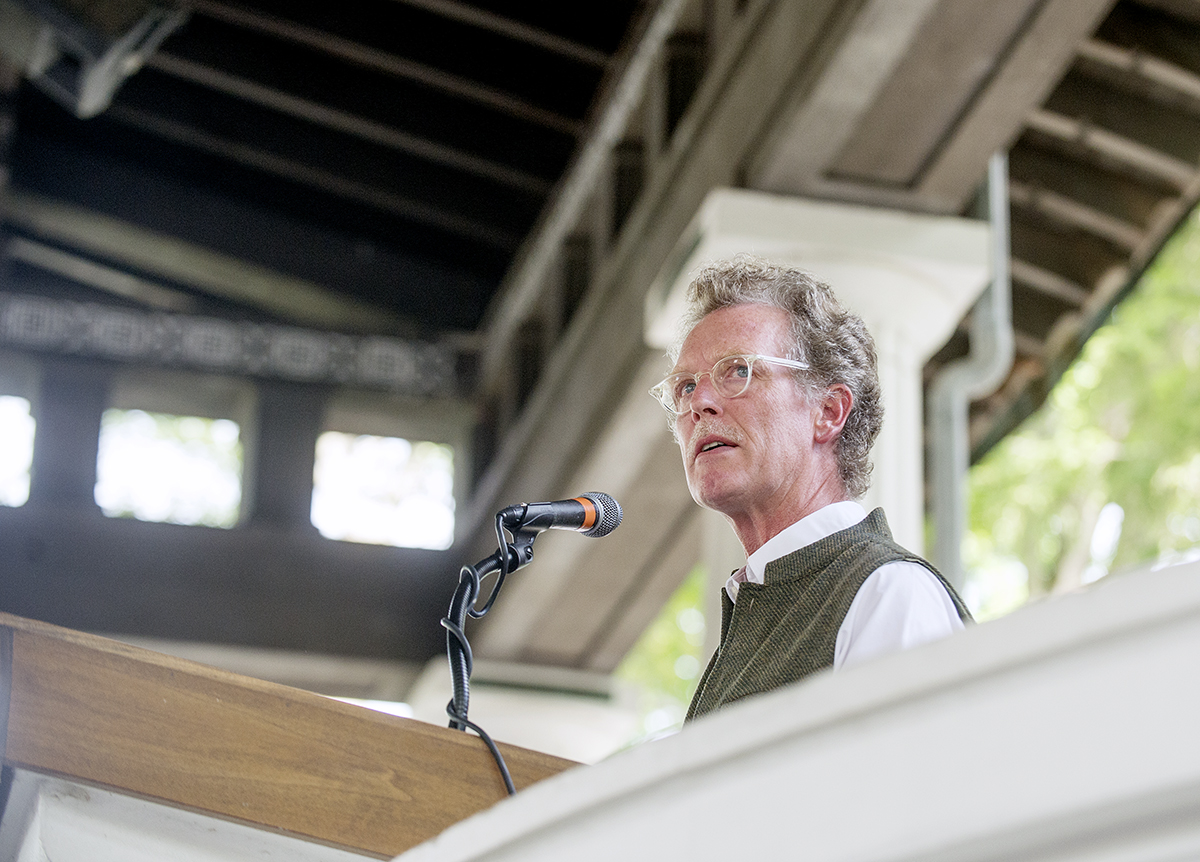 “Before the mountains had been shaped and before the skies were formed, God, with the feminine sacred wisdom, drew a circle on the face of the deep,” said the Rev. John Philip Newell during the 9:15 a.m. Thursday morning worship in a paraphrase of the Scripture reading from Proverbs 8.

“In every religion, in every culture there are mandelas, sacred circles,” he said. “From the Tibetan sand drawings to the Native American medicine wheel to the Jewish matzah to the rose windows in cathedrals, the circle is etched into our being and into all beings.”

His sermon title was “The Instinct for Oneness,” and the Scripture reading was Proverbs 8:22-31.

“There is a new consciousness rising to know the interrelatedness of all,” he said, “to understand the Holiness of Wholeness rather than the falseness of being well by looking after ourselves alone, our own nation, our own religion without recognizing the wisdom of other religions.”

Newell said “when Christianity got in bed with Empire,” much of the early Christian writings and gospels were lost, hidden or suppressed.

“In what other area of life do we only read what a fourth-century council of men said we should read?” he said.

In the Acts of John, of which only a fragment exists, there is a description of the Last Supper where after the meal, Jesus invites the disciples to do a circle dance. Newell called it “an image to resurrect.”

“In the circle of relationship, wisdom rises for the path forward,” he said. “Jesus stands at the center at the end of the dance; the whole universe takes part in the dance. Jesus moves us back to deep relationship with everything that has being. Western Christianity seems to want to airlift us out of this relationship.”

There is a new ancient recognition of the theology of wholeness. Pierre Teilhard de Chardin called for the celebration of sacred feminine wisdom, drawing a circle in the depth of our being.

“He talked about the fragrance of the feminine, a dimension that is in all things, that attracts us to oneness and invites us to dance,” Newell said.

That law of attraction is in every atom, what cosmologist Brian Swimme calls the urge to merge.

“Our Earth has been going around the sun for 4.5 billion years. You could call this a long-term, stable relationship,” Newell said. “It is a love affair, born for love, born to be part of the dance.”

When Newell was warden of Iona Abbey in the Western Isles of Scotland, his family had a dog name Joe, a border collie. His name meant spark of life.

“He lived to round-up,” Newell said.

On pilgrimage day on Iona, when the visitors walked the seven-mile route praying for peace and wholeness, Joe was “berserk with ecstasy.”

“He was living his oneness and in the afternoon when we got to the Hermit’s Cell, we all sat in a circle and Joe got in the middle and went to sleep,” Newell said. “One of the pilgrims said, ‘Of course he went to sleep. His work was done and he had you in a circle.’ What has happened to this holy instinct for oneness?”

When it came time for Newell’s family to move to Edinburgh, Joe went with them. And although he tried to round up the buses, Joe was no longer able to exercise his instinct and developed cancer. At about the same time, Newell’s oldest son, Brendan, became mentally ill.

“They are sensitive creatures and they take our brokenness into themselves,” Newell said. “Joe, who lived for oneness, took into himself some of our pain.”

Newell and his youngest son, Cameron, took Joe to the veterinarian when it was time to end his suffering. The vet told them that she would give him a shot and then in about 20 seconds he would let out his last breath.

“Cameron got as close as possible to listen,” Newell said. “That is the practice of presence: listening for the sacredness that is at the heart of the gift of life and being deeply attentive to pain and suffering. Here [at Chautauqua], we can be attentive to the gift of life, yet aware of the deep brokenness and we can return strong for greater presence, present to the beauty and pain within.”

On the walk home from the vet, Cameron said he had a sore throat and Newell acknowledged that he did, too. “I think it is because I want to cry,” Cameron said. When they got home, the family had a wake for Joe, laughing and crying for the “the most faithful member of the family.”

“We don’t have to create the circle; it is deep within all things. We have to step back into that circle, follow our instinct to be born again,” Newell said. “Shall we be partners in this sacred dance, shall we serve the new ancient holiness, the holiness of wholeness?”

The congregation sat in silent expectation.

The Rev. Virginia Carr presided. The Rev. Curtis Ackley, who with his wife Nancy are co-hosts at the Mayflower and travel by sleeper car on Amtrak to Chautauqua, read the Scripture. Clarinetist Debbie Grohman and pianist Willie La Favor performed “Romanza” from the “Sonata for Clarinet and Piano,” by Francis Poulenc for the prelude. Jared Jacobsen, organist and coordinator of worship and sacred music, directed the Motet Choir and the congregation in the hymn-anthem “Lord, Whose Love in Humble Service,” by Randall Davidson. The Randell-Hall Memorial Chaplaincy and the Geraldine M. and Frank E. McElree, Jr. Chaplaincy provide support for this week’s services.