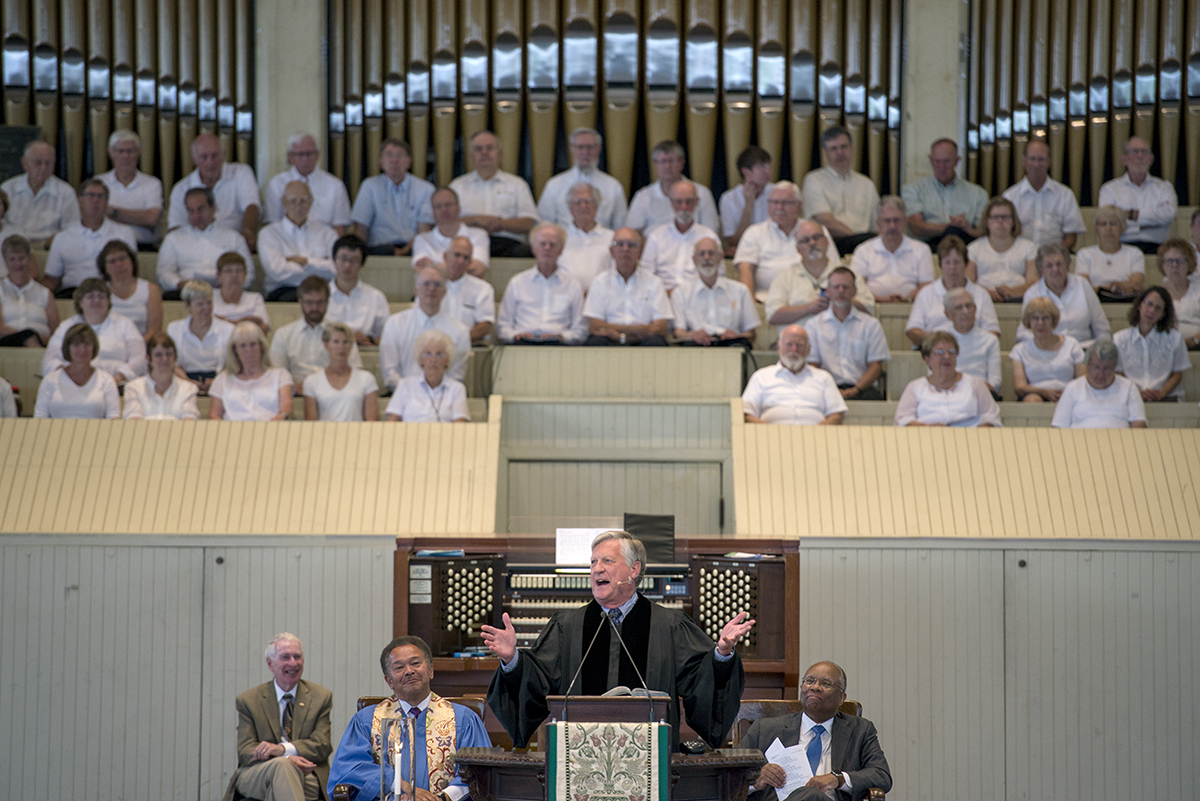 “In this cultural moment, the heresy in America is not atheism, it is superficiality. We can walk across the river of spiritual life and not get our feet wet,” said the Rev. Thomas G. Long. He was preaching at the 9:15 a.m. morning worship service Monday in the Amphitheater. His sermon title was “Deep Water,” and the Scripture reading was Luke 5:1-11.

There is an old story told around Princeton that in the 1940s a society matron motored down from New York City to the Princeton Inn. She got out of her car, fished around for a quarter and handed it to the little man standing by the door and said, “Take my luggage in immediately.” She flounced into the hotel. The little man, Albert Einstein, looked at the quarter, shrugged and took in the luggage.

“It was a case of mistaken identity and misjudged appearances,” Long said. “But I am more concerned about another case of mistaken identity that happened on Sunday all over America, of the Biblical story. We preachers know what to do: We have to get down to the marrow of the ancient story and pray like mad that there is a word for the day and then tell the truth, the whole truth and nothing but the truth.”

However, Long said, people get busy as their week fills up with meetings, program planning and visiting people.

“It gets late in the week and we take one look at the Scripture for the week and think, ‘I know what this is about.’ I teach my students that we owe our people and God more [than that].”

Long said he was embarrassed that he did that to the Scripture for the day, Luke’s story of Jesus calling the first disciples.

“I assumed I knew what this was about; I assumed that it was about Evangelicalism, to go into the wide sea and bring in souls for the kingdom,” he said. “But if you really look at it, it is a story about going deep, about depth over breadth.”

Jesus was preaching beside the lake of Gennesaret and Luke wrote the people were pressing in on him because they wanted to hear the word of God.

“I have learned that in Luke, when someone says they want to hear the word of God, it is a sign they don’t know what they are talking about,” Long said. “They are standing over chasms of great depth. When Jesus was preaching and a woman stood up and said, ‘Blessed is the womb that bore you,’ she was saying, ‘What a sweet little preacher and your mama must be proud.’ Jesus said to her, ‘Blessed are those who hear the word, take it deep and do it,’ ” Long said.

At the end of the story, the fishermen leave their boats and nets and follow Jesus.

“This was not a midlife crisis; they did not buy motorcycles and move to California,” Long said. “There was no Social Security. The old people, children and women depended on those boats. This was a revolutionary crisis in the community. You can tell this is about depth in the middle [of the story].”

When Jesus finished preaching, he told the fishermen to let out their nets. They told him they were professionals and there were no fish, but if you say so, we will do it.

“They had not been fishing deep enough and when they put out their nets again, there were more fish than could fill two boats,” Long said.

Our cultural heresy, Long said, is superficiality, not atheism. He told several stories as illustration. Terry Waite, envoy of the Archbishop of Canterbury, was trying to free hostages in Lebanon in the 1980s when he himself was taken hostage.

“He was a captive for four years and remained a gentle, peace-loving Christian,” Long said.

Toward the end of Waite’s captivity, one of the guards clandestinely gave him a transistor radio. Waite wanted to hear the gospel of hope in a broken world, Long said, so he saved up his battery for the Sunday Anglican service broadcast on BBC. As he tuned in one day, the preacher said he would be preaching on “Spiritual Lessons from Winnie-the-Pooh.”

“Terry Waite could only laugh at a person so isolated from the world’s pain that he thought there were spiritual lessons from Winnie-the-Pooh,” Long said.

The second story featured the Rev. George Buttrick, a renowned preacher in the mid-20th century. Buttrick was returning home on a plane from a conference and was working on his sermon. His seatmate was curious about what he was working on and asked Buttrick. He told him he was a preacher and working on his sermon. The seatmate said, “Oh, yeah, religion. Do unto others as you would have them do unto you is all the religion I need.” Buttrick asked the man what he did; he replied that he was an astrophysicist. Buttrick said, “Oh yeah, stars. All I need to know is ‘Twinkle, Twinkle, Little Star.’ ”

Long said a friend of his, a rabbi, called and asked to have lunch because he was having “a Christian problem.” When Long got to the lunch, the rabbi said an avant-garde group at his synagogue had started an interfaith dialogue. “That’s great,” Long said. “No, it’s not,” said the rabbi. “There isn’t enough faith there to ‘inter’ into. The Jews don’t know the Torah and the Christians don’t know the Gospel. One of the Christians said to me, ‘Don’t worry, rabbi, we won’t be talking about Jesus,’ I said, ‘Oh, yes we will. Someone has to stand up for Jesus.’ ”

“It is not until the vitality of faith is owned can we have interfaith dialogue,” Long said. “Another rabbi [Jesus] said, ‘You haven’t let your nets down deep enough.’ ”

He was having a chat with a friend who taught at a seminary whose family was dealing with a son with bipolar disorder who refused to take his medications. Long apologized for keeping his friend on the phone so long, but the friend said that was good because he missed chapel. Long again apologized and the friend said, “That’s OK. They are singing ‘I’ve Got Joy, Joy, Joy,’ and I need a deeper word.”

“The cross is at the center, the Gospel is in every crevice of human life,” Long said. “Thanks be to God that we’ve got a deeper word.”

Another friend, a hospital chaplain, went to an Ash Wednesday service and went back to work with a cross, made of ashes and oil, on his forehead. He went in to see a “smiley-faced Christian” woman who thought he had dirt on his forehead and tried to wipe it off. The chaplain said, “Don’t wipe it off; it is a cross in ashes.” The woman looked puzzled and asked why he would leave it on. He answered, “It is a sign that God is with me even when life goes to hell.” She took some ashes, put them on her forehead and said, “I need that, too.”

The Rev. Robert M. Franklin presided. The Rev. Robert Hagel, pastor of First Presbyterian Church in Jamestown, New York, read the Scripture. The Motet Choir, under the direction of Jared Jacobsen, organist and coordinator of worship and sacred music, sang “One in Him,” by Craig Courtney. The Mr. and Mrs. William Uhler Follansbee Memorial Chaplaincy provides support for this week’s services.