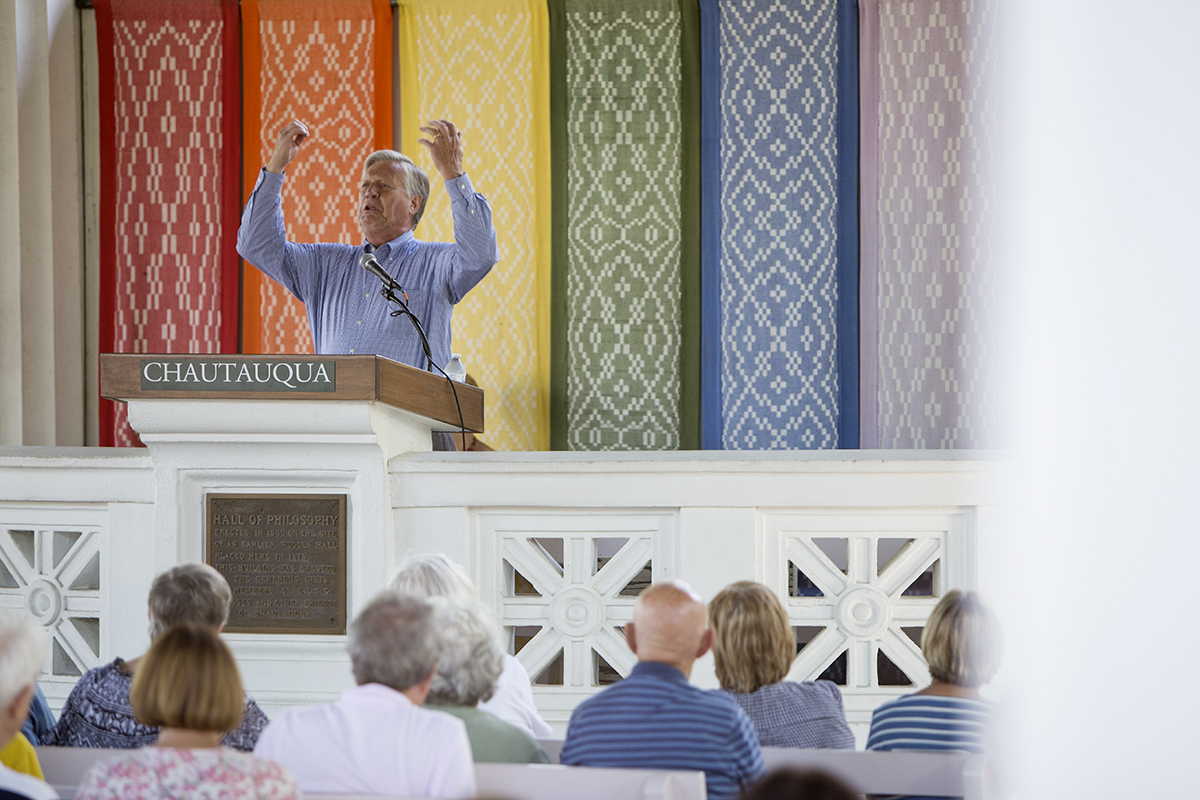 “Clarence Jordan, the great backwoods preacher, said that when Jesus told a parable he lit dynamite and covered it with a story. Parables are events of the Kingdom of God in linguistic form,” said the Rev. Thomas G. Long at the 9:15 a.m. Thursday morning worship service. His sermon title was “When Did We See You?” and the Scripture reading was Matthew 25:31-46, the separation of the sheep and the goats at the end of time.

“Here we have a famous parable that is a beginning preacher’s dream and an experienced preacher’s nightmare. For the beginning preacher it is a cute story that is very preachable,” he said. “But if an experienced preacher enters into the parable and expects a smooth ride, she is in for a shock because parables are a crazy house, a house of mirrors. If you enter it arrogantly, you will get ejected out the back door.”

The reason is that in every parable has a shock, a disorientation.

According to Biblical scholar John Dominic Crossan, myth establishes the story, narrative explores it, proverbs establish the norms, satire teases and parables subvert. The story in Matthew 25 is a fantasy scene at the end of time, Long said. Jesus divides the crowd in a dramatic gesture, sheep to the right and goats to the left. The sheep have fed the hungry, visited the sick and in prison, clothed the naked.

“This is the life that counts,” Long said. “ ‘When you do this to the least of these you do it to me,’ Jesus says.”

The goats have never done anything for anyone else. Long said their lives are inconsequential and “they go to the place of nothingness.”

“In one sense, this parable is one of the easiest to interpret,” he said. “We have a mission to share with the dispossessed. This is not charity but solidarity; the sheep see Christ in the poor and the sheep serve them because of the presence of Christ.”

Long watches “Morning Joe” with Joe Scarborough on MSNBC. Scarborough, he said, glories in being the conservative pundit on a liberal network. One morning Scarborough was differentiating himself from his colleagues, saying he was for smaller government and for a balanced budget “but not so far as not to care for the poor.”

Shortly thereafter, Long was talking with a radical, liberation theology priest who works on the U.S.-Mexico border. “I am just trying to live out Matthew 25,” he told Long.

“If both of them understand themselves as Matthew 25 Christians, the message is clear: We have a mission and a motive,” Long said.

When the church in Atlanta Long attends began a homeless shelter, he volunteered to be a host for the night and invited a friend to help him. They put out sandwiches and tea and those seeking shelter came in. Because someone had to be awake all night with their guests, his friend decided to take the early shift to talk with some of the people who had come for the night. He woke Long up at 2 a.m. and said, “I’m no theologian, but I think Jesus Christ is out there.”

Long shared the story of a man who felt he could not longer stay in the Presbyterian Church (USA) after the denomination voted to allow clergy to perform same-sex marriage ceremonies. He went to see his pastor and told him he was not angry, but broken-hearted and he had to leave. They cried together, prayed together and said goodbye.

The next Sunday the man decided to go to the Baptist church near his house and when he got there he heard the old hymns, the Bible preached and he felt the power of God. On his way out, he told the preacher he had not expected to find a new church so quickly and told him why he had left his old church. The pastor said, “We are happy to welcome you if you want this to be your new church home, but I have to tell you that is my partner over there.”

The man went back to his pastor and said, “I get it. Jesus Christ is in more places than I ever dreamed.”

Long shared two more stories. One was of a public health nurse in Asbury Park, New Jersey, who, with her supervisor’s approval, took a job at as a chamber maid at a run-down hotel that housed indigent elderly people. She scrubbed toilets, changed linens, checked blood pressure and gave medications. A friend of hers asked how she could do such demeaning work. She replied, “In the face of everyone I see the face of the risen Christ.”

A physician in Ciudad Juárez, Mexico, runs a clinic in a very poor section of town. There is no money for medicine and she relies on churches in El Paso, Texas, to collect contributions and then she comes across the border to take it back. She has been arrested many times for drug running — she gets penicillin — and had her car confiscated.

One day she was bringing blankets back in a truck and she was stopped by a border guard. She told him there were only blankets in the back and he said he wanted one. She walked to the back of the truck and said, “Shame on you. You have a job.” He said he did not care, he wanted one and she said, “These are for those who have nothing. Go ahead and steal one. These will be wrapped around the sick and the poor, around the body of Jesus Christ.” The guard backed away.

“These are Matthew 25 Christians with mission and motive,” Long said. “But what about the shock [that a parable brings]? If these people minister because they see the face of Jesus Christ, what is the shock? In the parable, no one sees Jesus’ face, neither the sheep nor the goats; they are oblivious to the face of Christ.”

“The message is that if you live the parable, the parable will become your identity,” Long said. “As Jeremiah wrote, it will be written on your heart.”

Princeton sociologist Robert Wuthnow was researching why people become loving, generous, compassionate people. He found that those people had experiences of grace early in their lives that became part of the moral narrative of who they are.

An EMT responded to an accident where the fire crew was trying to get the driver out of a truck with the jaws of life. The EMT crawled through the shattered windshield and told the driver he would not leave him. Earlier in his life, when he was having his wisdom teeth removed, a nurse stayed with him to help him overcome his fright. When the EMT visited the truck driver in the hospital, the man said, “You are crazy as hell. Why did you do that?” The EMT replied, “It seemed like the thing to do.”

“When our lives come to their summation, the greatest blessing is that you cared for the poor, fed the hungry, visited the prisoner,” Long said. “Wherever there was need, you were there. It just seemed like the right thing to do.”

The Rev. Robert Hagel presided. Paul Burkhart, a member of the Motet Choir and retired professor of speech at Shippensburg University of Pennsylvania, read the Scripture. Pianist Joseph Musser and flutist Barbara Hois performed “Sonata for Flute and Keyboard,” by Joseph Bodin de Boismortier for the prelude. The sacred music for the day, sung by the Motet Choir under the direction of Jared Jacobsen, organist and coordinator of worship and sacred music, sang “Come, You Have My Father’s Blessing” by Walter L. Pelz. The Mr. and Mrs. William Uhler Follansbee Memorial Chaplaincy provides support for this week’s services.