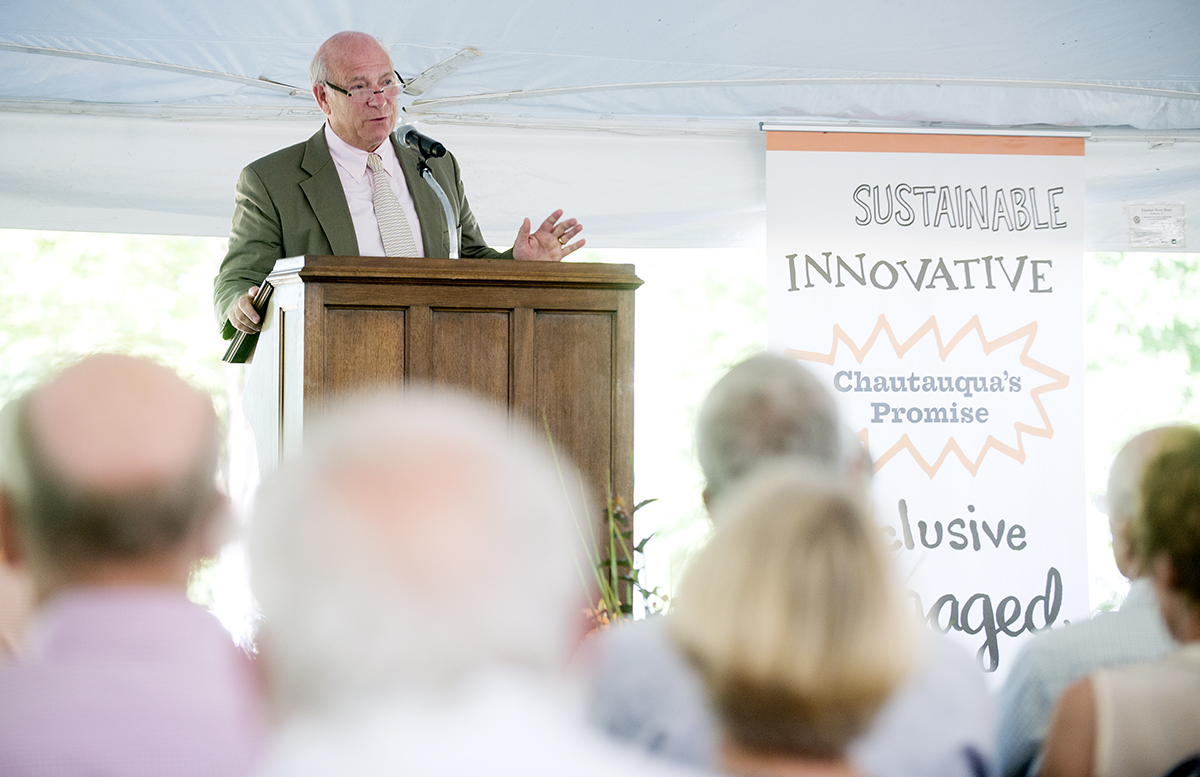 The festivities gradually commenced as members of the Bestor Society gathered under a large white tent in anticipation of hearing the annual President’s Address.

Chautauqua Institution President Tom Becker walked amongst the spectators, shaking hands and exchanging greetings. A sentiment of long reflection and gratitude was in strong order as attendees celebrated the great feats accomplished through philanthropy and leadership over the ongoing summer and prior decades.

First to speak was Jim Pardo, chairman of the board of trustees, welcoming and commending the sea of supporters he looked upon as most loyal and passionate, enabling the Institution to maintain and present its first-class programming. He spoke of the importance of their contributions, to the Institution’s financial sustainability and viability.

Then, after Cathy Nowosielski, co-chair of the Chautauqua Fund, recognized the new Bestor Society members, Deborah Sunya Moore, vice president and director of programming, introduced the evening’s surprise entertainment with an “Artistic Salute to Tom,” an “inter-arts ode” of sorts. Using simple rhyme and playful bounce, Moore was able, along with those present, to “offer with love, three taps for you,” a nod to the president’s traditional  “Three Taps of the Gavel” addresses at the start and close of each season.

Those “three taps” would soon invite one of the first surprises of the evening as the curtains of an adjacent annex tent were ripped off, revealing a live rendition of “Fanfare for a Common Man” by Aaron Copland, performed by a Music School Festival Orchestra chamber ensemble. As the French horns, trumpets and tubas boasted the anthems in full gusto, a student ceramist tamed a 20-pound lump of clay into a formidably stout vase. Later, it would be glazed and fired, presented as a gift to Tom and Jane Becker. Don Kimes, artistic director of Visual Arts at Chautauqua Institution, described the muddied piece as a suitable metaphor to Becker’s tenure at Chautauqua. Taking the ingredients of nothing, and over time, shaping it into everything.

Kimes would continue to praise Becker, thanking him for paying attention to the visual arts program, noticing needed renovations for rotted floors, hot practice shacks and assistance in erecting and maintaining such facilities as Elizabeth S. Lenna Hall and Fletcher Music Hall, none of which “just show[ed] up.”

“We thank you for making this work of art for us,” Kimes said. “It’s called Chautauqua.”

Chautauqua Dance Artistic Director Jean-Pierre Bonnefoux acknowledged all Becker had done, fighting all the yearly battles on behalf of artists like himself. As a measure of thanks, Bonnefoux introduced a performance by a young ballerina from the School of Dance. Choreographed by Bonnefoux years ago, the routine could best be described as the way in which free-cast water would move, the speckle of jewels on her pink dress shifting in the setting sun’s light.

Following the dance was Rossen Milanov, music director and principal conductor of the Chautauqua Symphony Orchestra. He recognized the difficulties faced over the year, but assured those present that the choppy waters would soon settle, once again reflecting its usual immaculate status, worthy of Becker’s legacy.

Next was a vocal performance by Tiffany Townsend, a singer in the Voice Program, standing in for Voice Program chair Marlena Malas. If not for the overhead protection by the tent, Townsend’s violently beautiful and shaking voice could have shattered the sky, and the heavens along with it.

As the firmament held true, Chautauqua Theater Company Artistic Director Andrew Borba stood up and painted Becker as an “authentic dreamer,” envisioning those present as lighted by his glow, energized by his inspiration. Borba then recited a traditional farewell speech used in theater, a monologue spoken by the sorcerer Prospero in Shakespeare’s The Tempest. He also accommodated an addition from Hamlet:

“What a piece of work is [this] man, how noble in reason, how infinite in faculty, in form and moving how express and admirable, in action how like an angel, in apprehension, how like a god” (Hamlet Act II, Scene II, Lines 327-330).

And as a final token of artistic thanks to Becker, Carol Rausch, administrator and chorus master of the Chautauqua Opera Company, introduced members of the opera company as they sang “Chautauqua, I Love You,” inviting the audience to sing along.

But it was as the event came to its dénouement, as Pardo introduced Becker for the address, that everyone’s attention was wholly primed. Pardo remembered how his predecessor, George Snyder, talked of the great pleasure that came along with being chair, introducing Becker at events such as this, adopting the same measure of gratification, but also noticing his weighted task.

“It is pleasurable, but it is not easy,” Pardo said. “Finding the exact right words or turn of a phrase is not easy. Tom Becker is unique and passionate and wonderful and awe-inspiring, and all of those other superlatives that one might choose to string together in praise of someone who performs transformational work at its very highest level.”

Pardo would enumerate Becker not only as the president and chief executive officer of Chautauqua Institution, but also as the Institution’s “chief visionary,” “chief of strategic investment,” “chief motivator,” “chief conscience officer,” the type of man who recognizes “the investment in one’s self and in others,” “an investment that is not about what we pay, but one that focuses on what we give and what we receive.”

When Becker ultimately spoke, it was concentrated on the active, conscious and purposeful engagement of the individual and community. And one of immense thanks.

“Garden by garden, tree by tree, bench by bench, facility by facility, program by program, this Institution has enjoyed a genuine renaissance,” Becker said. “I’d like to leave you with the thought that what you have been doing all of these years, with these conversations and investments, is a construction of a cathedral of creativity. And not unlike the great cathedrals of Europe, this is an endless process. Driven by a combination of hope, and faith, and an attraction to something much larger than our individual selves. And while the actual boundaries may not soar as do the walls of cathedrals, we are lifted by the energies of moral imagination, creativity, reverence, open-mindedness, civility and rigorous reason that permeate the conduct of our assembly. Our cathedral can be sacred space. We make it that way, by our commitment to the embrace of mystery, to a willingness to learn and be committed to issues beyond ourselves.”

The truth is, Becker told the audience, “there are no words to capture the depth of gratitude and affection Jane and I hold” for the Institution and for those gathered at the address.

“You have opened your lives and your family narratives to us, and we have been forever changed by your generosity,” he said.