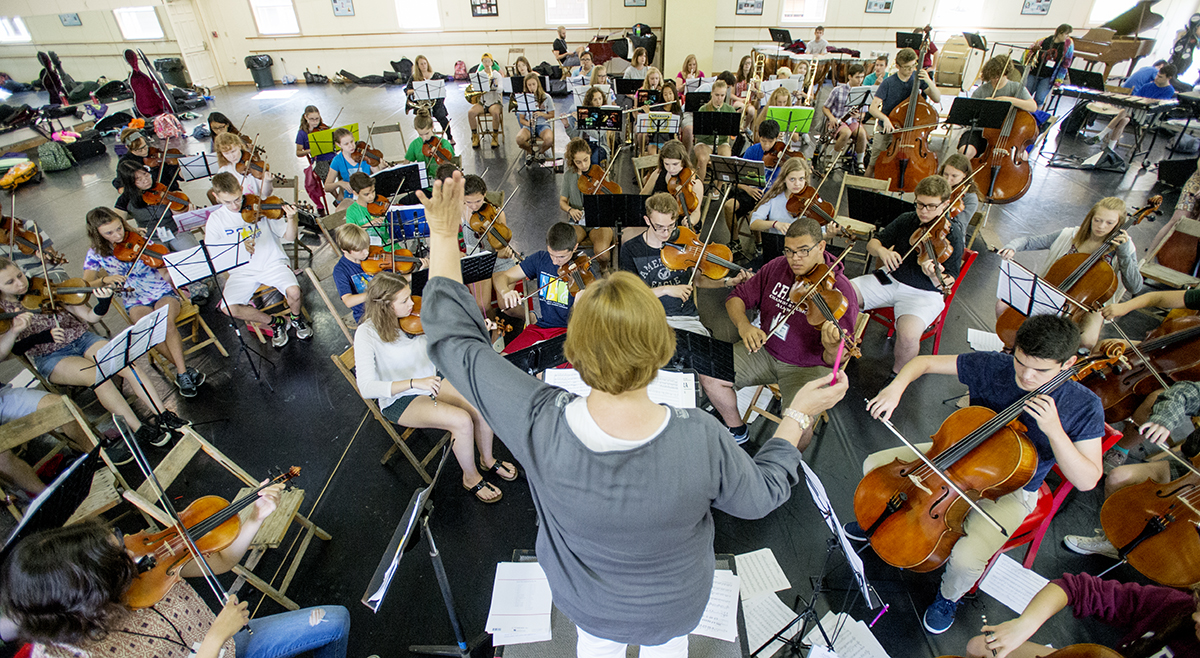 Since 1999, Chautauqua Music Camps have inspired musical and emotional growth in middle and high school students. Members of the Chautauqua Symphony Orchestra and professionals from the region provide coaching in chamber music, orchestra ensemble, jazz and band during Week Eight.

To end the week of intensive daily instruction, more than 100 young musicians will perform at 11 a.m. and 12:30 p.m. August 20 in Elizabeth S. Lenna Hall.

Slated for the first time block is the middle school band camp, which includes kids in grades six through nine. The middle school jazz combo will have a short performance in the same time block. Then, the orchestra camp will take the spotlight, followed by a brass ensemble and woodwind quintet.

A majority of participants come from Chautauqua County, 20 of whom are from the Panama Central School District, which received a grant this year to allow it to bus kids to and from the camps. Six of the young musicians are the children of current CSO members.

Since its inception, camp director Peter Lindblom said, the program has more than doubled in size, and it is beginning to attract children of institution residents who enroll in place of Boys’ and Girls’ Club.

Jenna Anderson, previously of Jamestown, first came to the music camps 18 years ago as a fifth-grade flutist. She returned for four summers before changing her focus to the violin.

Like most campers, her first chamber music experience was at Chautauqua. She said the musicianship classes were awesome for her as a young musician.

“I told her she was great at the flute, but, ‘I know you really love the violin, and it’s time to specialize now, because it will pay off,’ ” Lindblom said. “She dropped the flute before she went to high school.”

Anderson said that was great advice.

“The last time I played flute was here, and by then, I was first chair,” she said.

As of January, Anderson plays in the Grand Rapids Symphony in Grand Rapids, Michigan, and has returned to Chautauqua as a coach of chamber music.

“You have to step outside yourself and look at the greater good,” she said. “That artistry is one of the most important things that we teach to our students. Not just with music but in taking pride in what you are creating to show the world.”

For many kids who come to one of the camps, it’s their first time in an orchestra setting. The program tends to a large range of ages and skill levels.

“They walk in [to rehearsal], and you can see the fear in their eyes,” Anderson said. “By the end of the week, they are just the happiest people.”

She said that kids as young as 10 come in and are inspired by other campers.

“They have that experience, from being super afraid of the music and seeing all these kids [who] are able to do these things, and then they get better and keep working at it,” she said. “There’s such a family environment, where the older kids take the younger kids under their wings and make sure they know what they’re doing.”

But not all campers go on to pursue music, and that’s OK, according to band conductor Terry Bacon, who is an instrumental music instructor in the Churchville-Chili Central School District.

“Very few of our graduates have gone on in music,” Bacon said. “But that’s not why we’re doing this. Music is part of everything we do … and we can do it collectively, so our kids choose to take a week of their summer and make music with a bunch of other kids.”

He said some kids have a high interest and skill level, and others do the best they can, but the bottom line is they all make music as a unit. That, he said, is “wonderful just to see the interaction.”

“You’re allowed to fail,” Lindblom said. “We are not expecting concert-level performance. You can really experiment.”

Bacon said the best thing they can do as instructors is give them the tools students need and get out of their way.

“It’s a community of learners,” Bacon said. “We are all just musicians in a room. Some of us have more experience than others, but to not be afraid to make a mistake … to be human and show all musicians make mistakes. It’s an extension of our humanity.”