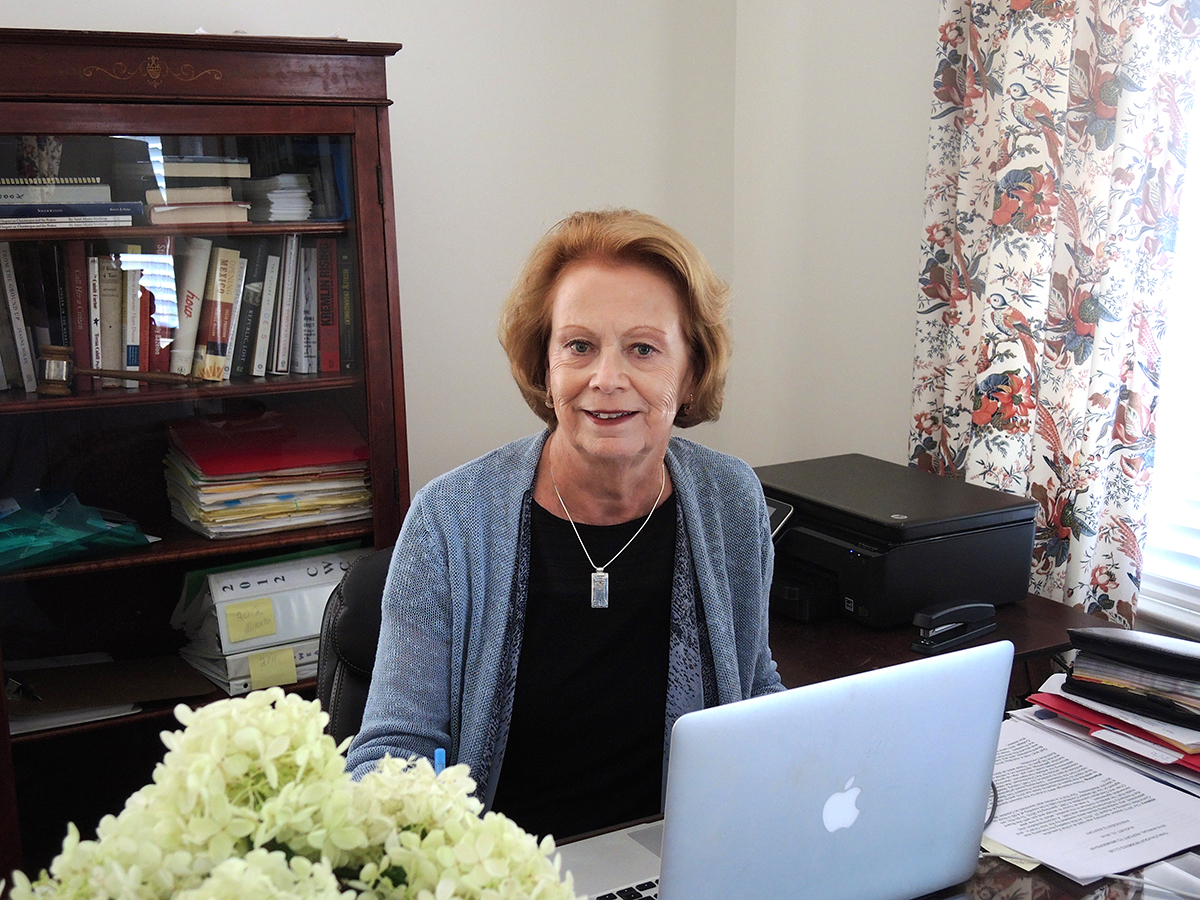 The season’s end brings nothing if not change. Lectures and programs of all kinds are concluding, most Chautauquans are returning home, and students are heading back to school.

At 30 South Lake, the 26th president of the Chautauqua Women’s Club is retiring. During the CWC’s Aug. 17 executive board meeting, Nancy Griffin Shadd informed the board of her decision to realign her life and spend more time with her family and friends, some of whom have experienced unexpected health issues and losses. She encouraged all to embrace change, and to continue to “move the needle forward” as they carve out the CWC’s future.

“Being CWC President these three years has been such an amazing experience, which I have embraced to my very core, and have loved the opportunity, challenges and satisfactions it has brought to me,” Shadd wrote in her notice to Gail Gamble, chair of the board.

The responsibilities that Shadd has assumed since 2013 are similar to those of a CEO — leading the organization’s day-to-day operations. She has been reporting to the chair of the board, the program vice chairs and to Chautauqua Institution. After 2010, when Barbara Ellison Vackar completed her five-year presidency, there was a three-year period during which there was a new president at the CWC each year.

“The Women’s Club has really been fabulous,” Shadd said. “It’s been a learning experience, a challenging experience; exciting, rewarding and satisfying. The friendships and warmth that has greeted me is a reward in itself. A majority of members are hard-working and want to see the CWC advance. They love it and are pleased to be a part of the history. I think I offered them a positive direction and stability when they were rudderless.”

CWC’s mission is to enrich the lives of its members and the community by enhancing fellowship; providing social, educational and service-related programs; and sustaining scholarship opportunities for Chautauqua’s fine and performing arts students.

As part of its educational programming, the CWC sponsors four weekly speaker series throughout the season: the Contemporary Issues Forum each Saturday afternoon in the Hall of Philosophy (for which the president chooses all but one of the nine speakers), the Chautauqua Professional Women’s Network on Monday afternoons, the Contemporary Issues Dialogue on Wednesday afternoons and the Chautauqua Speaks series on Thursday mornings.

Shadd’s years of leadership in education and volunteerism made her particularly well-suited for the presidency of the CWC’s largely volunteer organization.

Originally from Hornell, New York, Shadd has spent most of her adult life in the Rochester area. She majored in speech correction at Nazareth College, in nearby Pittsford, New York. In 2014 she received an Outstanding Alumni Award from Nazareth for embodying the college’s commitment to lifelong learning and service to others.

“Speech pathology was different,” she said. “I really, really loved it. I had fabulous teachers. And now speech pathology is a highly desirable career because of our aging population and the increase in autism.”

Before she married, had two children and became the household manager and chauffeur, Shadd was a speech pathology teacher for Rochester City School District children in kindergarten through eighth grades. Afterward, she moved into speech-language pathology teaching, and from there to communication and learning support teaching in special education.

Shadd completed a certificate of advanced study in education administration — similar to a master’s degree but without a thesis requirement — from SUNY Brockport in 1988. She became the principal of, and then, from 1995 until her retirement in 2003, the director of support services for Monroe #1 BOCES (the Board of Cooperative Educational Services No. 1 for Monroe County, New York). In the latter position, Shadd oversaw eight departments (including audiology and mental health), eight administrators and 350 staff members.

From 1995 to 2013, Shadd served as a member of the board of directors of the Supervisors and Administrators Association of New York State. She was also a regional representative to 33 school districts. When she assumed the job of CWC president, she resigned those positions.

In addition, Shadd is a past president of the Fairport Area Branch of the American Association of University Women, a national organization that promotes equity for women and girls through advocacy, education, philanthropy and research.

Since 1987, Shadd has also served as a docent at the National Susan B. Anthony Museum and House (NSBAMH). In this capacity she shared the story of Anthony’s lifelong advocacy for women’s voting rights and equal rights for all.

“I volunteered for committees and a broader level of participation than a docent has to do,” Shadd said. “I was vetted to be a trustee, and was for six years.”

As such, she co-chaired the Collections and Education Committee and was a member of the Strategic Planning Committee.

“This background was very helpful here because the museum is run on volunteers and the CWC is a volunteer organization,” Shadd said. “Museums are dependent on volunteers. We worked as a board to reach out to them, thank them and show them how appreciated they are. Volunteer recognition was important to the board, and financial stability and sustainability was also key.”

Shadd said she aligned volunteers at the NSBAMH in order to keep them, to keep them learning and to keep the doors open. Built in 1858, Anthony’s house was “very, very old and needed to be protected.”

It was a similar situation she encountered at the CWC.

“[The CWC House], built in 1928-1929, also needed protection and sustainability,” Shadd said. “I have great sensitivity to the CWC’s historical structure and the sheer energy of a volunteer force. I think that appreciation of member-volunteers, even for the smallest task, helps us achieve our goal. I’m a big believer in many people making light work. Our first board meeting this season was a social, to get people collectively interested in and excited about the season.”

Shadd said that she will be back “absolutely” to enjoy everything that Chautauquans enjoy.

“I really love this place,” she said.