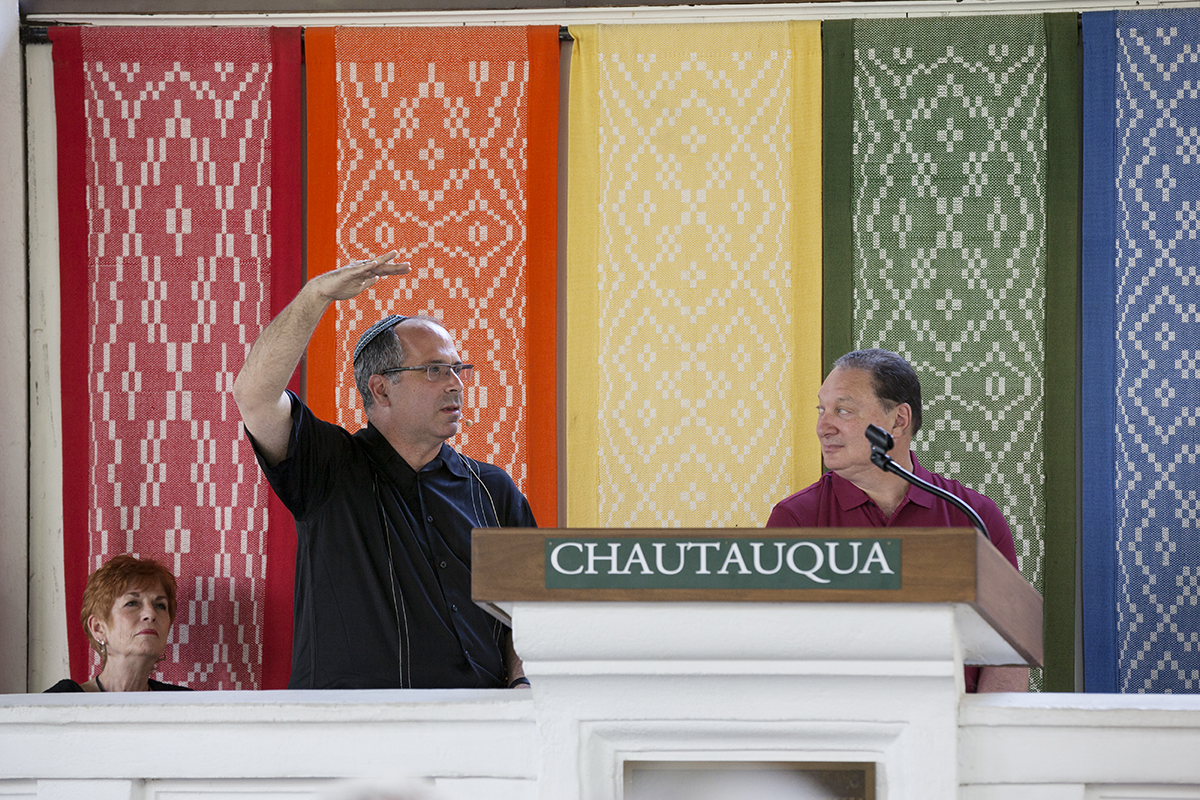 Bullets sprayed the party bus as 20-year-old Brionna Boddy stepped onto its steps. She had been with friends at a house party. She wanted to see what the bus looked like. She became one of Cleveland’s 120 homicides in 2015, the most the city had seen since 2009.

As Boddy’s father grieved and grew angry, wanting retribution, her grandmother called the Rev. Stephen Rowan. Rowan did what he has done for nearly two decades as a pastor of Bethany Baptist Church in the predominantly black village of Glenville, Ohio, one of the poorest neighborhoods in the country. He provided whatever was needed. In that case, Rowan said, it was a refuge to weep freely and spill his troubles. Boddy’s father never retaliated.

“People will come to us in times of need when they hurt and we have to be that healing place, a place of comfort when there’s nowhere else to go and when they want to shriek out,” Rowan said.

On Tuesday in the Hall of Philosophy, Rowan and Rabbi Robert Nosanchuk, spoke about their work as religious leaders and interfaith activists. Ronn Richard, president and CEO of the Cleveland Foundation, a philanthropic organization that works with residents and local leaders for community development and reform, moderated the discussion.

In Cleveland, religious leaders like Nosanchuk and Rowan take on roles outside their places of worship. Even as the American economy has grown as a whole, Cleveland has been left behind.

A January study from the Economic Innovation Group listed Cleveland as the most distressed city in America, where more than half of adults don’t have jobs and more than one in five of homes sit empty. Neighborhoods have been ravaged by crime and the city found itself at the heart of the fight over police violence after a white cop shot and killed 12-year-old Tamir Rice. In the poorest neighborhood of Cleveland, Rowan tends to congregants’ (and non-congregants’) daily needs, helping them face crime and violence and receive mental health services and healthcare, among other needs.

When a Chautauquan asked Rowan how he tries to bridge the left-right political divide, Rowan said he didn’t have time.

“Everyday people are in crisis; see, your question is more of a global issue,” Rowan said. “And I appreciate your question, but if you come to where I work and see what I do, you’ll see I’m too busy trying to deal with people’s needs.”

Presiding over Anshe Chesed Fairmount Temple in the upper-income suburb of Beachwood, Ohio, Nosanchuk faces less of the same issues among his own congregants. Yet Anshe Chesed — literally “People of Lovingkindness” — has long been a center for social justice activism. For 28 years in the mid-20th century, prominent civil rights activist Rabbi Arthur J. Lelyveld led the synagogue. Nosanchuk has made it his mission to follow in his footsteps, championing causes such as health care expansion, racial justice and education reform.

Both Nosanchuk and Rowan framed their faiths’ contribution to the city around love. Rowan invoked the civil rights era. Nosanchuk discussed the Jewish concept of sinat Chinam, boundless or baseless hatred, and how the only way to counter that is Ahavat Chinam, boundless love. He invoked the work of the Hebrew Immigrant Aid Society that settles refugees and the Maltz Museum of Jewish Heritage, which teaches about intolerance.

“That, to me, means building institutions that at their core are about building understanding between us,” Nosanchuk said. “There’s so much knowledge that we can gather when we admit how little we know about one another.”

Nosanchuk is also on the board of Greater Cleveland Congregations, a coalition of religious organizations (including Rowan’s church) that over the last five years has pushed for criminal justice reform and for Gov. John Kasich to endorse Medicaid expansion, and helped bring the mayor and the teachers union together for education reform.

When former Cleveland police officer Michael Brelo shot 15 bullets into a vehicle with unarmed passengers, Nosanchuk said, the GCC organized a peaceful action to channel people’s anger toward positive change and avoid the riots that had just erupted in Baltimore. The result was a consent decree between the Justice Department and the Cleveland Division of Police calling for reforms.

“These kind of actions have tremendous power, because they speak symbolically to a unity across divides people are not used to seeing,” Nosanchuk said.

For Rowan, shootings hit closer to home. He works to stem the divide between police and his congregants but he also faces an epidemic of gun violence in his community. In the past year, he has presided at the funerals of three people, and knows of seven or eight young relatives of his congregants, who have died as a result of gun violence. He said gun violence was not just a physical problem but also a mental health one, because people are exposed to such continual trauma.

And yet, even as they advocate from the pulpit and in the streets, Rowan and Nosanchuk said their influence as clergy has diminished. There was a time, they said, when clergy were the most intelligent and well-informed people congregants knew, and to whom the people listened raptly to learn something new and understand the world each week. Today, however, amid social media and the sheer glut and speed of information, they said, that influence has diminished.

Even as it softens clergys’ impact on their own congregants, however, social media has also allowed clergy to reach people they never could, they said. Nosanchuk recalled when his old synagogue in Virginia opened their doors to a neighboring Muslim community for Jum’ah, the Friday prayer. Because of social media, the story and its inclusive message was picked up across the world.

“There’s tremendous power and opportunity to reach people across the world who may not be able to hear us through the typical methods,” Nosanchuk said. “There’s only some folks who are going to come in through the door.”